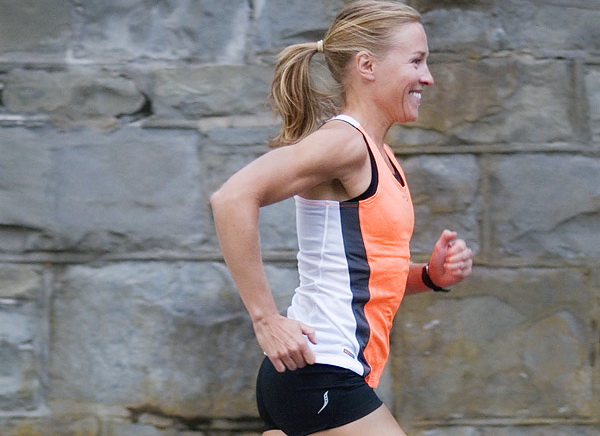 Marilyn Arsenault of Victoria, BC will be racing the Toronto Scotiabank Waterfront Marathon Sunday, October 14th. She is back where she started two years ago, when she was planning on running the Toronto event, but had her plans derailed at the last minute by a rare infection that not only hospitalized her, but threatened her life. Even though she is now two years older (44) her goal time is more aggressive, she said, “my goal two years ago was in the 2:38-2:40 range. I am definitely fitter this time around and recent workouts have indicated I may be able to aim lower by a few minutes”.

Arsenault ran to a new 10k personal best time and Canadian age-group record Saturday, September 1st at the British Columbia 10,000m Championships that were held at the University of Victoria’s Centennial Stadium. She ran thirty-four minutes and twenty-two seconds. Asked if this new personal best has allowed her to adjust her goals, she said, “not really, the 34:22 would indicate a finish time of about 2:40 and I was already aiming just below that, but it did certainly boost my confidence knowing I could run that time during a big mileage week”.

Arsenault is coached by Trent Stellingwerff. Stellingwerff is a physiologist, coach and former NCAA division one athlete. “Trent has the amazing combination of being a sports physiologist and an experienced coach. His approach isn’t vastly different from what I have been used to so the transition was quite easy. I would say his workouts have more variety which has made marathon training more fun and interesting”, said Arsenault.

The Canadian masters record for women over 40-years-of-age is two-hours and thirty-nine minutes. This time was set by Danuta Bartozsek on May 12th 2002 at the Ottawa Marathon. Perhaps Marilyn Arsenault will have taken two Canadian age-group records by the time she crosses the finish line of the Toronto Scotiabank Waterfront Marathon.