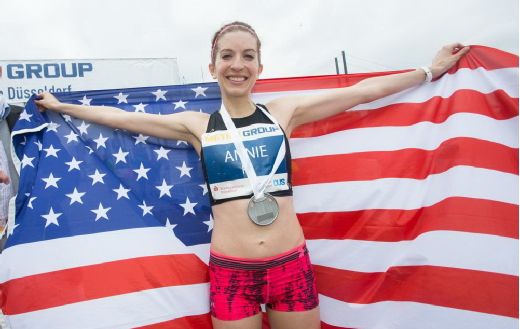 Annie Bersagel fell early in the race but recovered to defend her title in the METRO GROUP Marathon Duesseldorf. The American showed great determination to go on and clock a personal best of 2:28:29. In good weather conditions Marius Ionescu of Romania won the men’s race with 2:13:19. Adding other running events staged parallel to the marathon a total of 18,000 runners entered the METRO GROUP Marathon Duesseldorf.

For financial reasons there was only a very limited elite field in Sunday’s race. However organisers are hopefully that the situation will be much improved again next year.

Chasing her personal best which she ran last year in Duesseldorf with 2:28:59 the race against the clock began with some sort of a shock for Annie Bersagel. Around the 10 k mark the defending champion tumbled to the ground after an athlete running behind her had touched her accidentally. But the 32 year-old was quickly on her feet again and continued despite some bad scratches and bruises. Guided by pacemakers she then passed the half way mark in 1:13:40, which was 20 seconds faster than planned. At that stage there was no serious rival left in the race. Brazil’s Sirlene De Sousa Pinho was well behind early on, trailing Bersagel by almost five minutes after eight kilometres. She then dropped out after 13 k due to cramps.

Annie Bersagel kept going. She passed 25 k in 1:27:18 and then 30 k in 1:44:48. While she was on course for a finishing time of around 2:27:30 she then slowed in the final seven kilometres after her pacemakers dropped out. However Annie Bersagel managed to improve her personal best by 30 seconds on Sunday. “I am really happy to have clocked a personal best after the fall, which caused some brief shock. But the pacemakers did a terrific job today, I have to thank them,” said Annie Bersagel, who is a semi-professional athlete with a full-time job living in Oslo. She works as an adviser in an investment company which manages public pensions in Norway and has just got a contract extension. “I am hoping to be able to switch to part time from the summer to prepare for the US Olympic marathon trials in Los Angeles next February.” The Rio Olympics are her dream goal. With the courage she showed today Annie Bersagel might well be in for a surprise in the trials.

Fabienne Gehlen of Luxemburg took second with 2:55:26 and Germany’s Sophie Salzwedel was third in 3:00:53.

The men’s race was much closer. Led by pacemakers a group of four runners – Marius Ionescu, Belgium’s Abdelhadi El Hachimi, Sibusiso Nzima of South Africa and Germany’s André Pollmächer – passed the half way mark in 65:52. While Pollmächer dropped out with a foot problem after 26 k Ionescu and El Hachimi were together after 30 k which they passed in 1:34:00. It was during the next 5 k section when 30 year-old Ionescu built a lead. Clocking 2:13:19 the Romanian improved his PB by 14 seconds. 40 year-old Abdelhadi El Hachimi was second with 2:13:46 and Marcin Blazinski, who comes from Poland but has German citizenship as well, took third in 2:16:08.