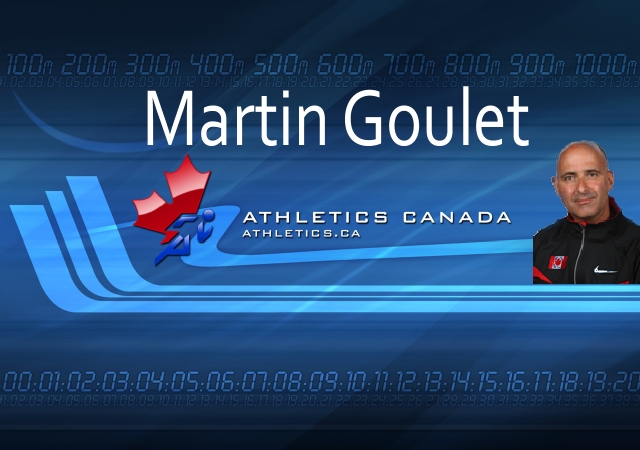 Martin Goulet, Chief High Performance Officer of Athletics Canada recently took the time to answer a few questions regarding Canadian Olympic standards. He comments specifically on the Lanni Marchant and Krista DuChene appeal in regards to them potentially running for Canada (or not). Goulet also talks about the excellent performances of the three male marathon runners who have qualified for the 2012 London Olympic Games, Reid Coolsaet, Eric Gillis and Dylan Wykes.

Goulet is a lifetime runner, who was once competitive himself at a regional level. He competed at varying distances including racing to his marathon personal best in 1980 with his 2:34. He  continues to run with a near daily schedule.

As the national sport governing body for track and field, including cross-country running and road running, Athletics Canada supports high performance athletics excellence at the world level and provides leadership in developmental athletics.

Christopher Kelsall: You were a competitive runner yourself back in the day, do you still get out there for runs?

Martin Goulet: I was a runner and basically always have been. I competed in distances ranging from 400m to the marathon at what I would call a provincial level.  I ran 2:34.27 in the marathon (Ottawa, 1980) but at one point in my Montreal base club for which I was the head coach back in the eighties and the nineties there was two female runners with better PBs – one under 2:30 and the other one at 2:30.41, winning the 1994 Commonwealth Games marathon while in another Montreal club two more females were under 2:32 . . . Over the last four years or so, I have been averaging five runs a week of 40 minutes each. I love running and like millions of people just feel great exercising on a regular basis.

CK: Any race events that you may want to jump into for fun-oriented competition?

MG: Last time I ventured jumping into a race it was in the 5k one year ago during the 2011 Ottawa Race Weekend. But my 14 years old son outkicked me badly with 600m to go after sitting on me for most of the race at a 4 minute per km pace. My son plays Bantam AAA football in the Provincial League. He is not exactly gifted for distance running and prefers by far the short sprints. After that 5k I said to myself that I will wait for a while prior to enter another event like this . . . or at least I won’t drag my son with me!

CK: Now that there are three male runners who have qualified and two women who came close to the Canadian standards in the marathon distance it appears to be a smart move having the Olympic standards where they are. Did you have confidence in the plan from day one?

MG: The success of Reid (Coolsaet), Eric (Gillis) and Dylan (Wykes) is a result of several factors including of course their hard work and determination. But a key factor is certainly the quality of coaching. Dave Scott-Thomas and Richard Lee are doing an outstanding job. Coaching is the most important factor when it comes to what we call in the high performance jargon the “quality of the daily training environment”. These coaches are the smart guys. Our decision to set fair standards for the marathon when compared to other events and to the real world level is not “smart” or anything else like that, it is just the logical thing to do given our mandate.

CK: In regards to the Olympic track and field standards that are based on past World Championships and Olympic Games results, where the athletes going into an Olympic Games are likely to reach top-12 in placing, why 12? Why not top-20 or top-5?

MG: The “Top 12” element is an objective that has been set in close consultation with our funding partners and stakeholders. Please consider that within the qualifying period (basically 2011 and 2012), our three selected marathoners for the London Games are currently ranked 42nd, 43rd, and 49th in the World (with maximum three athletes per country considered).  So while they have done well, they don’t currently fall in the Top-12 category. We believe that with the proper final phase preparation they can execute perfectly on “D” day, and they’ll be ready to compete for a Top-12 finish or close.

CK: Do you think that perhaps the rankings are skewed unfairly as athletes from Kenya and to a lesser extent Ethiopia make up (I am guessing) 25 or more of those spots?

MG: Again, for the purpose of our analysis we are always considering a maximum of three athletes per country.  The analysis is the same regardless of the event.  In the 100 meters the domination of the USA and Jamaica is also quite amazing. But at the end of the day the different countries can only get three athletes for a given event on their respective Olympic team.  Actually many are making the argument that in an event where the talent is more evenly distributed around the world it makes it actually more competitive once in a Games or Championships situation as less of the best athletes on the world list are “eliminated” just because they happened to be 4th, 5th or 6th in their own country despite being among the world top-12 as an example.

CK: Did you construct the parameters of the standards from scratch or are they based on another national set of standards?

MG: Our high performance mandate is clear, we are not going to the Olympic Games to participate, we are going to compete and be among the best. It may seem minor but there is a big difference between “participating” and “competing.” We have to keep in mind the international reality when we, as a national governing body, set standards. The IAAF standards are constructed with a number of factors in mind, notably overall program packaging and marketing considerations play an important role. As an example this is why the 100m standards are relatively easier than field events standards. The IAAF needs four rounds over two days for the short sprints. In order to do this you need a minimum of 64 athletes ,while in the field events they need to limit to two qualifying flights of approximately 16 athletes each for a total of more or less 32 athletes. Having 64 athletes in the field events would be unmanageable from a programming standpoint.

CK: So the marathon is a better package.

MG: The marathon is a better package with a big field, thus the extremely soft standards (in comparison to everything else – including the 100m). The mandate of the IAAF is to set standards that will allow for a good show and that will fall within the parameters set by the IOC. Athletics Canada’s mandate in nominating an Olympic Team is quite different. We want to nominate athletes that are more or less equally competitive on the world stage. A quick analysis of the IAAF Top List rankings makes it clear that a 2:37.00/2:43.00 marathon time for women is on a completely different planet than let say 4:06.00/4:08.90 for the women’s 1500m and even more 8.20/8.10 in the men’s long jump.

It should be noted that the majority of our competitors are doing the same as us. One example among many: France has set their Olympic standard at 2:27.00 for the women’s marathon.

CK: In regards to occupying various planets Lanni Marchant and Krista DuChene, have run intergalactically considerably faster than the 2:37/43 IAAF standards and have orbited much closer to the Canadian standards. And as you know, in Olympic marathons anything can and will happen. Is there any  consideration towards the fact that most Olympic Games and World Championships marathons have warmer temperatures and no men in the field (more time running solo perhaps), which may lend credence towards the “anything happening” comment?

MG: Actually these later considerations could easily be interpreted against what some could be suggesting in favor of Lanni and Krista. The notion that “anything can and will happen in an Olympic marathon” is misleading. The top level is more predictable than some people think.

CK: In regards to Lanni Marchant and Krista DuChene’s petition (that was turned down) and appeal and potential arbitration. Can you explain how Athletics Canada (or the Canadian Olympic Committee) handles the process?

MG: I am sure that you will understand as well as your readers that I cannot comment on this while it is still underway. What I can say is that Athletics Canada has a very clear appeals process, and we have and will continue to follow that process very carefully in order to give the appellants the opportunity to have their case heard in a fair and reasonable manner.

CK: What date do you think a decision will be made public?

MG: In the best interest of all parties involved, as soon as possible I truly hope! Please note that it is now out of the National Team Committee hands and in the hands of the Designated Official and an independent panel.