The great Irish poet and classicist Oscar Wilde wrote, “Success is a science; if you have the conditions, you get the result.”

So the question today is what are those conditions?

The International Association of Athletics Federations (IAAF), the world governing body of the sport of athletics released the qualifying standards for the 2020 Tokyo Olympic Games on Sunday, March 10. The new standards require a much higher level of performance for most events compared to previous Olympic and World Championships standards. Although this sounds like a foreshadowing in condemning the IAAF for the standards that they released, it is more about the confusion that they have thrust upon the athletics world. 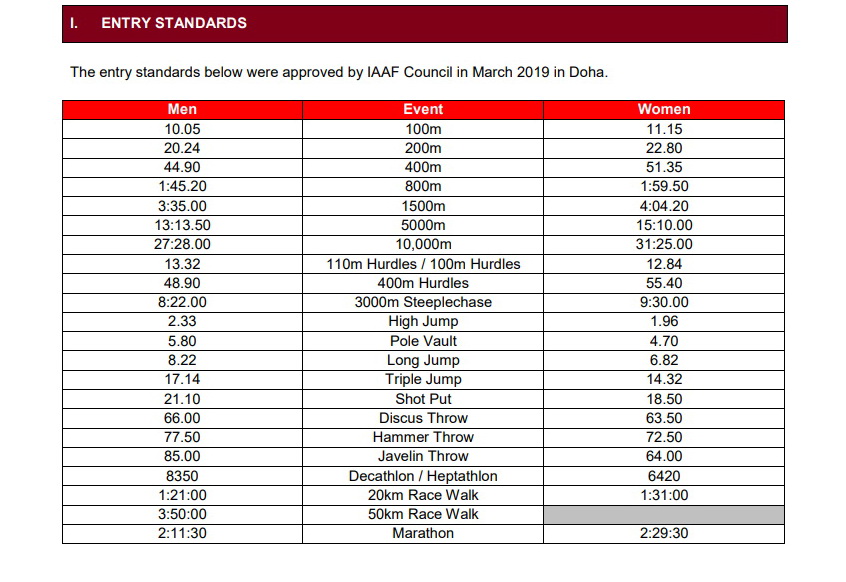 Firstly, some athletes and coaches are not aware that there is an equal amount of emphasis on global ranking as there is for specific time standards – which is new – and at the same time, the IAAF appear to be killing some distance events; hence some confusion has ensued.

Additionally, the Global Ranking results will remain a mystery until July 1, 2020. For now, the IAAF has published the size of the field for each of the proposed 48-events that are scheduled.

“I understand the qualification process fully,” said Vancouver’s Rob Watson, a coach and two-time 2:13 marathon runner. “But the fact that so many people are confused by it is clearly a problem. It is track and field – times and distances are very simple principals. Why do they feel the need to make it so difficult? There is such a massive disconnect between the IAAF and the athletes that they are supposed to be serving, it is unreal. The IAAF is being very proactive in killing their own sport.”

For the majority of medal-contending athletes, the new standards or global ranking requirements are a moot point. For athletes who are up-and-coming, they may now have less of a chance to get exposure to championship-style competition.

How does that benefit those that are currently outside of the top-27 or 32 or 56 (depending on the event) in world ranking? It doesn’t. In fact, it will require some athletes to attempt national records or an Olympic-level performance during the qualifying period – not ideal, except possibly in the middle distances.

Despite this, there is some good news hidden in the details, because the IAAF has added emphasis to the global rankings than on the specific qualifying times – times are apparently now more of a fallback metric; some events may be more accessible than others.

Also, the qualifying period is longer, which is a good move. For most events, two months has been added. May 1, 2019, is the start of the qualification period with it ending on June 29, 2020, except for the marathon and 50K racewalk events; their qualification period ends a month earlier and started on January 1, 2019, along with the 10,000-metre event.

Marathon world record holder Paula Radcliffe told Athletics Illustrated, “The qualifying time is a fallback so those top athletes (certain finalists or top-6 placers), who might be injured in the build-up and therefore can’t qualify via rankings, can do a one-off top-level performance to qualify for the Games. That’s why they are so hard. Athletes are not meant to try and qualify via the times.”

The ranking system – a new progressive idea – will open up some athletes to qualify based on racing performance; the cream (doping aside) always rises to the top. One athlete, who is taking a positive approach, will have to break her own national 10,000-metre record by 16 seconds to qualify on time alone. Vancouver’s Natasha Wodak owns the Canadian record of 31:41.59. The new qualification standard is 31:25.00. To avoid disappointment she will need to enter new territory to make sure her global rankings are high. When she ran her best in 2015, it was 23rd in the world that year.

Last year that record time would have put her 12th in the world. She was safe as she was ranked 18th with her 31:50.18 performance. And here is where she could find herself on the outside, looking in. In 2016, the year of the Rio Olympics, she competed, but by the end of the Rio competition was ranked 49th with her 31:53.14 (Rio run) and if she ran her record performance of 31:41.59 it would have been 42nd overall that year. The ranking system might bring out a mass of 10,000-metre runners to try to qualify for Tokyo during the spring of 2020.

So, of course, it is no coincidence that the 31:25 standard is directly linked to those Olympic Games, as the 23rd ranked athlete Hanami Sekine ran 31:22.92. Emily Infield ran 31:26.94 in Rio. Infield qualified with her 31:38.71 the year before and was ranked 20th. Amaz Ayana of Ethiopia ran the world record time of 29:17.45 proclaiming that “God is my doping,” Not likely. Her performance is highly suspicious, especially to be run in a global championships event in the heat.

“At first I saw the standards I was shocked,” said Wodak. “But it has lit a fire under me and I am going to have to do the best I can to qualify.”

However, she has very few opportunities to hit it right on the day, as the IAAF’s Diamond League not only does not offer a 10,000-metre event, they have just pared off the 5,000-metre race. The longest Diamond League event is now 3,000-metres – not even an Olympic distance.

This is important as the fastest athletes who can bring out the best in others in a Diamond League meet, for example, will be seeking competition elsewhere for the few 5,000 and 10,000-metre events that are available. It is already tough to get into the meets; this could make it even more difficult.

For Wodak, she has the Payton Jordan Invitational in May and the Pacific Distance Carnival – Canadian 10,000m Championships in Burnaby on June 13. That’s just about it.

There is only one other domestic athlete that can push her to that time at nationals and she is Rachel Cliff who has moved up to the marathon. Although Cliff is undecided if she is going back down to the track for this spring, there is the chance that the only potential rival for Wodak (to push her in a domestic championship), Cliff may not even race the 10,000m.

“Well, I may have to rely on pacers through 5,000-metres like Sarah Inglis of Scotland,” said Wodak.

Inglis is living and training in Greater Vancouver. She will want to compete in her own national championships as well. Qualifying on time will be a tall order for both.

Bideau had 13 athletes compete in the 2016 Rio Olympic Games.

“I don’t see this system as making it likely that I will have a lot less (athletes qualifying) and it is actually mostly irrelevant to the better-established athletes,” he added. “Where it will hurt is with the new emerging talents who simply had to run a time in most cases to the get their opportunity.”

The standards will have little effect on Bideau and his athletes, however, for Wodak; her domestic competition (other than Cliff) has not run within a minute of her best time. There is no bridge, yet she is not an emerging athlete but a national record holder and Rio Olympian.

“The rankings system will be tested this year and we will get a better idea of how or if it works. Thankfully it isn’t just Diamond Leagues meets, but also national and regional championships and other competitions,” added Radcliffe. “I think we have to give it a chance before condemning it.”

In fairness, it is early days; however, perhaps the IAAF could have better explained the ranking system.

For Wodak, perhaps her alternative is the marathon. Only time will tell.

The marathon will be difficult. Cliff has qualified on time; however, there are no other Canadians near the standard of 2:29:30. Until Saturday, the national record was 2:28:00 by Lanni Marchant. A Canadian would have to be close to the national record to qualify on time, but be way out of the global rankings. In the ranking system, 153 women in 2018 ran under the standard – the IAAF is accepting only 80. Getting global ranking will be difficult. In this case, it would be easier to run a 2:29:29, but will that suffice?

If Wodak will have trouble locating more than a couple quality 10,000-metre races, it’s worse for a marathon runner who can peak but just twice a year.

For the men, there is a similar predicament. Black Creek, BC’s Cam Levins broke the national marathon record running at 2:09:25 in Toronto in Sept. 2018. He is the only active male Canadian athlete to have run fast enough in the marathon to qualify. In 2018, Levins’s 2:09:25 national record was 133rd overall and 240 men ran under the 2:11:30 standard.

Why limit a road race to 80, when hundreds if not thousands could toe the line.

Similarly, there is just one Canadian 5,000-metre runner to have run faster than 13:13.50, Mo Ahmed with the national record of 13:01.74. The landscape for Canadian athletes has gotten much tougher.

In contrast, it appears that the IAAF wants to make world cross-country the crown jewel of athletics, as it once was. In Aarhus, Denmark, the 2019 world championships will include a run over a museum roof as well as an opportunity for non-qualifiers to get into the same race as the world-class athletes through an application process. The meet will include a festival-like experience and citizen’s race.

While the World Cross Country Championships and the athletics portion of the Olympic Games are under the purvue, sort of speak, of the IAAF, they appear to be going in two different directions. The IAAF’s Diamond League is one example.

“What I don’t understand is why they alienated the distance runners by getting rid of anything over 3000m,” said Radcliffe. “It seems based on the notion that 3000m and 5,000m are interchangeable – they aren’t.”

Although the 3,000m to 5,000m and the 5,000m to 10,000m can have overlap for some athletes, the higher the level of performance there is, the more those distances become their own event requiring a physical ability specific to the paces and efforts required to run them well.

“Meet directors would decide, to be honest, even the runners probably only want a couple of top-level 5000m races a year anyway, and the rest would have been 3000m. So the time allocation goal for TV programs would be achieved without alienating the distance community. Of course there can still be other events outside the TV part of the program, and let’s hope there will be, since most people paying to spectate an athletics event want more than 90 minutes of action.”

An interesting example that lends credence to Radcliffe’s point is within the Let’s Run story of Yomif Kejelcha an Ethiopian who medalled in the 3,000m indoors, but failed to medal in the 5,000m for the world championships by .21 of a second, finishing fourth in the Beijing and London World Championships.

Paul Chelimo, a Kenyan-American, who beat Kejelcha, is worried that the Diamond League could reduce the series to a middle-distance competition.

The IAAF appears to want to kill the 10,000m event. They talked seriously about removing it from the 2016 Rio or 2020 Tokyo Olympics.

The IAAF is not doing the athletics world any favours by complicating their qualifying process while at the same time sending mixed messages about some of the long-distance events. If this is a design towards lighting a fire under some athletes, it will likely work for some and leave others out. The IAAF should tread lightly as we certainly don’t want distance racing to be affected the same was cross-country – once the crown jewel of athletes – was, which is now reduced to little more than East African dual meet, hence the changes being applied in Aarhus.

Oscar Wilde also once wrote the duplicitous, “True friends stab you in the front.”