Matt Hughes, Canada’s all-time fastest 3,000-metre steeplechaser has had a great season in 2015, including competing well in Canada’s National Track League (NTL), in Europe, Toronto Pan American Games and Beijing World Championships. He capped his season off with a win at the national road 5K championships.

Hughes won the 5K championships in the time of 14:16.20. The championships portion of the race was run in conjunction with the sixth annual B&O Yorkville Run on Sunday, September 13th.

The race included several other strong athletes of which 12 (including Hughes) finished under the 15-minute mark.

Asked about how the race played out, Hughes said, “It wasn’t my intention to lead the race, but I wasn’t surprised that I was at the front from the gun. I knew some guys would be keying off me, and with the downhill start I thought it might go out a little quicker. I knew Luc (Bruchet) was coming off his break, but he is always a tough competitor and I had no idea what type of shape Justin MB would be in, but having trained with him before (in Wynn Gmitroski’s group) that guy is crazy talented and can kill tempos, so I kept a careful eye on him as well. My plan was to stay within myself for the first 2-3K and then test the field a bit (if I was leading). I pushed a couple times coming back up Avenue Run, but nothing really strong. Evan (Esselink) and Justin still looked pretty strong to me, so I decided to just hold off until we had 1K to go and then make a hard move and see what they had.”

His great season started in February where he set an indoor personal best in the 3,000-metre distance at Boston University, where he finished in the time of 7:51.87, which was good for second place in his heat and second place of 119 finishers in all eight heats.

On May 2nd at the Payton Jordan invitational, Hughes ran a 5,000-metre personal best of 13:19.56. For an athlete that does not specialise in the distance, this is a fast performance, for example the Canadian record was run two days earlier by Mo Ahmed who clocked a 13:10.00. Until then, the record was held by Jeff Schiebler from his 1998 Berlin performance of 13:13.96.

The only thing that Hughes didn’t do was improve on his 3,000m steeplechase personal best of 8:11.64 this year; however, on July 21st, in front of a home town crowd (he is actually from Oshawa, a 61-kilometre drive east of Toronto on the 401) he won Pan American Games gold.

Hughes also competed in the 2015 Beijing World Track and Field Championships where he finished 8th among the world’s fastest, running a season best 8:18.63.

In regards to how he felt after competing at such a high level all season, he replied, “I was happy with my performance yesterday. Obviously the goal was to win, but to be honest my motivation coming off Worlds and the European circuit wasn’t really where it need to be to prepare for this race. Having said that my fitness from the season was able to carry me through and it’s always fun competing in Toronto and in front of family and friends.”

Hughes noted that it was a very fun race with a good atmosphere, “The meet directors Megan and John did a great job!”

Coe has no issue with athlete protests; IOC continues to drag feet on Rule 50

Natasha Wodak went to the well to run an Olympic qualifier in the marathon with her 2:26:19 performance

Canadian Olympic marathon qualifiers: And then there were 5 (in the picture) 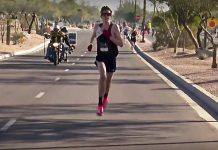