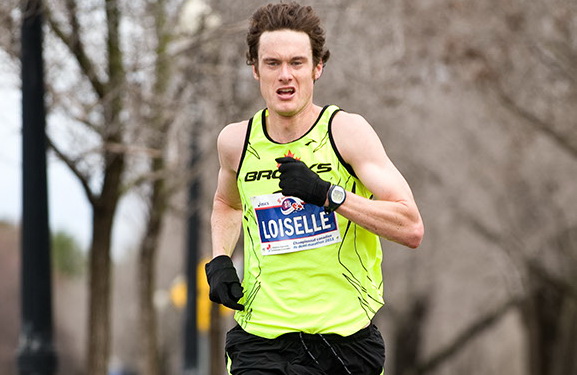 Marathoners are wise to race their chosen distance two, maybe three times in a year which means it’s critical to get the buildup right.

With his victory at the Toronto 10 miler race August 12th Matt Loiselle received a good indication that his preparations for the 2012 Scotiabank Toronto Waterfront Marathon are proceeding very nicely indeed.

It was the Toronto resident’s second victory at the distance, having won the Tely 10 mile race in St John’s in 48:09 in July. But defeating the consistent Kenyan Josephat Ongeri (49:42) and Rob Watson (50:43) on Toronto’s Canada Running Series certified race course – in a time of 49:35 – was added value.

“Definitely my focus is on ‘Waterfront’ and I will try and knock off a good time there in the hopes of getting the qualifier for the Moscow 2013 World Championships,” the 27 year old Loiselle reveals. “Everything in the last few weeks until October is geared up towards that.”

Hedging his bets just a little, he doesn’t want to say what his time goal is for the IAAF Silver Label race in Toronto, October 14th. But he expects it will likely take somewhere around 2:11:30 to earn a place in the five man team representing Canada at the world championships in Moscow.

Should Loiselle get onto the team it wouldn’t be the first time he has worn the Canadian colours. As a promising junior athlete he ran in the 2003 IAAF World Cross Country Championships. His 95th place finish was a lesson in hard knocks and demonstrated the gap between top Canadians and world class athletes.

More recently he finished 55th in the 2009 IAAF World Half Marathon Championships in Birmingham, U.K with a time of 1:04:59. He has since run 1:03:47 for the distance and he has experimented with tactics against the likes of Coolsaet and Gillis. He wants them to know they have been in a race when they finish.

Now he is a fully fledged marathoner having run a personal best of 2:16:01 a year ago in Toronto. But for the poor weather conditions on that day he might well have run a minute faster.

Loiselle trained right through the Toronto 10 miler keeping his mileage up around 200km a week. To run as fast as he did, and to achieve victory, gives him confidence that he is more than capable of making the Canadian team.

“I am kind of taking a different approach to my training this summer compared to last summer,” he explains. “Last summer my original plan was to get the 2:11:30 (Olympic standard) and I was killing every workout. This time around I am not putting as much pressure on myself in every workout.

“I have been getting in more consistent training. I am not getting sick or anything. I had bronchitis a month before last year’s Toronto Waterfront Marathon and that could be from overtraining. It’s hard to say how much better shape I am in or not in.”

The year 2012 started ideally for Loiselle with a victory at the Toronto Harry’s Spring Run Off 8k (23:55) before a 3rd place finish at the Vancouver Sun Run 10km (29:18). He was also 2nd in the Banque Scotia Montreal Half Marathon (1:04:56) which served as the 2012 Canadian Half Marathon Championship. Clearly, his progress has been rather steady reminding one of the path Reid Coolsaet followed to London.

Loiselle attended high school in Windsor, Ontario and was an outstanding cross country runner. He makes no secret of the fact the success of fellow Ontarian, Kevin Sullivan inspired him to make a career out of running.

“When we were all in high school (Canadian 1,500m record holder) Kevin Sullivan was the one we all looked up to” he confirms. “When he finished 5th in the 2000 Olympics and ran 3:31 that year – obviously I am far from a 1,500 runner now – but seeing a Canadian guy doing well in the Olympics it was when I was kind of getting involved in track and field.”

He accepted a scholarship offer from Central Michigan University where he eventually earned a degree in accounting in 2007 before returning to his home in Windsor. He was primarily a steeplechaser at the time. But an invitation to join the Brooks Canada Marathon Project soon followed and he moved to Toronto.

The shoe company still sponsors him although the project has since evolved into “Athletics Toronto”, a middle and long distance running club. RMP Athletic Locker, the Canadian distributor of Brooks shoes, has since sold the house in Toronto’s scenic High Park area where its sponsored marathoners lived rent free. Loiselle remains in the area where he can run on the trails and along Toronto’s beautiful lake shore.

“I work about twenty hours a week up in Newmarket at an organic grocery store,” Loiselle says. “They sponsor me as well. It’s called ‘Nature’s Emporium.’ I do some accounting work for them and they give me free food. My girlfriend Paulina lives a couple of streets over on Humberside, same area. It’s enough to get by. What I make from running is a bonus, I guess.”

Loiselle is grateful for the support Paulina has given him and says she is in a similar position of pursuing her dreams as a dancer.

“She’s had a few professional gigs in contemporary/ballet dance companies,” he says proudly. “She has now taken a new job as a fitness instructor at a studio called Barreworks in downtown Toronto.  It’s sort of a dance-inspired workout program.”

He admits he tried the workout although he is not as coordinated as most dancers. Still he recommends the program.

Loiselle has the pragmatic mind of an accountant and is economical with his time. Everything is planned precisely. But for now his profession is on hold while he pursues his athletic ambitions. So, how much longer does he see himself competing?

“I think four years down the road I will be 31, 32 so I will have a lot of time for an accounting career where I can make money,” he says. “It’s been a lifelong dream since I was a kid to excel in a sport and, particularly, to go to the Olympics. I have had my eyes on it the last few years. I don’t want to give up on it.

“I am going to work my ass off the next four years. Since I moved to Toronto I have had a tremendous amount of support from Nature’s Emporium. I have been getting free physio from Ron O’Hare in Aurora, and the coaching staff (Hugh Cameron, Eddie Raposo and Dave Reid), they don’t take a penny from us. They do it voluntarily.

When he lines up for the 2012 Scotiabank Toronto Waterfront Marathon he will do so knowing he has done everything in his power to prepare for a fast time. As he puts it, everything he is doing is geared towards that end. A spot on the Canadian World Championship team would be icing on the cake.