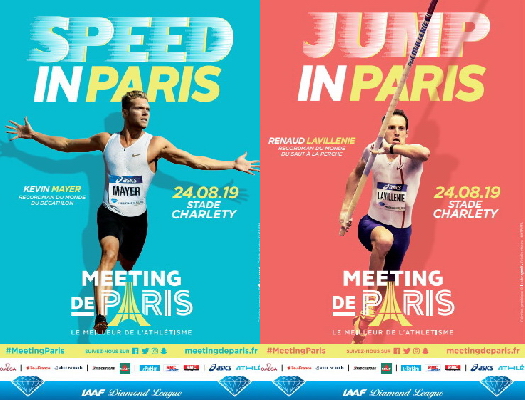 The date is set. The MEETING DE PARIS will take place on Saturday, August 24 2019 at the Charléty Stadium with the same promise as ever: offering athletics at its best. Frenchmen Kevin Mayer, world record holder in the decathlon, and Renaud Lavillenie, world record holder in the pole vault, are the first two star performers to be unveiled for this unmissable meeting, which is perfectly positioned in the event schedule, one month before the World Championships in Doha.

The 2018 edition of the MEETING de PARIS stunned onlookers with its clutch of three new area records and two IAAF Diamond League records secured on the night, yet the 2019 edition of France’s most prestigious athletics meet is already shaping up to be an unmissable event, one month prior to the World Championships in Doha (28 September – 6 October). Another special feature of this edition is that the athletes will get to perform on the brand new track in the Charléty Stadium, which is also set to host the European Championships in 2020. This news will particularly appeal to Kevin Mayer and Renaud Lavillenie, who are always keen to perform well in front of a home crowd.

Of particular note, this year is the fact that the MEETING de PARIS will be held in late summer, on 24 August.