A double ration of thrills. On Saturday 30 June 2018, the MEETING de PARIS will present the audience at the Charléty Stadium with two reigning world champions from one of the most explosive middle-distance events: the 800m. Caster Semenya on the one hand, Pierre-Ambroise Bosse on the other. Two of the most iconic stars of world athletics competing in the French leg of the IAAF Diamond League. A guaranteed showstopper.

Pierre-Ambroise Bosse is a familiar face at the meeting organised by the French Athletics Federation. Indeed, the Frenchman made his debut here in 2012, less than a year after his European junior title. 20 years of age back then, he ranked 9th in a time of 1’47’’85, albeit with the certainty that he’s approaching the highest level in the world for the first time.
Since then, the athlete from Nantes has competed at the MEETING de PARIS three times, in 2014, 2016 and 2017. His best place was 4th in 2014, a year where he created a stir by devouring the two laps of the track dressed in a French football squad shirt. As ever, it was his own very personal way of showing his support for the Blues who were midway through the World Cup in Brazil. His best time at the MEETING de PARIS dates back to the 2016 edition, with a time of 1’43’’58. Doubtless, he’ll be keen to excel on home soil for what will be his first Parisian race since his world champion title.

Caster Semenya has a less substantial track record at the MEETING de PARIS. The South African has only made up the billing here just once before, in 2011, the year she secured her second world title. She carried the day, dominating proceedings in a time of 2’00’’18. Now a triple world champion and double gold medallist at the Olympics, she will be competing on the Charléty track with the same goal she has every time she races: victory.

Top of the leaderboard in the 2018 world ranking (1’56’’68 in the semi-finals of the Commonwealth Games on the Gold Coast), Caster Semenya has remained undefeated over the distance since her elimination in the semi-finals of the 2015 Worlds in Beijing. At 27 years of age, she’s set herself a fabulous challenge this season: to win the IAAF Diamond League over two distances, the 800m and the 1,500m. She kicked off her campaign with victory in the longest of the two, on 4 May in Doha, in a time of 3’59’’92, a new national record. In Paris, she’ll be keen to link together victory and the best possible time. However, she’ll first have to erase her personal best time (1’55’’16 last year at the Worlds in London) in order to treat herself to the MEETING de PARIS record, which has been held since 2008 by the Kenyan Pamela Jelimo in 1’54’’97.

The world champions already signed up for the MEETING de PARIS: 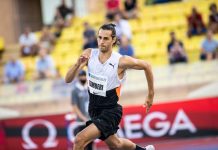