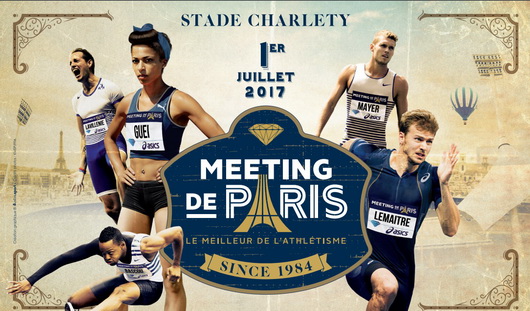 On Saturday 1 July 2017, in the late afternoon, the cream of French and global athletics will push open the gates to the Stade Charléty. The legendary arena will serve as a showcase and a setting for the MEETING de PARIS, the seventh leg of the IAAF Diamond League. After years at the Stade de France in Saint-Denis, the Parisian meeting is making a major comeback at the very heart of the capital, having already reinvested in the AccorHotels Arena in Bercy back in February for its indoor version.

To celebrate this fact, the MEETING de PARIS is returning to a more traditional schedule of 1 July, a date that favours great performances due to the fact that the event falls during a period when athletes are increasing in power. In this way, one month before the World Championships in London, the French and overseas elite will get a chance to show just what they’re made of in a stadium and on a track where athletics have already written a series of memorable pages in sporting history. Going back to its roots somehow, the event nonetheless boasts a veneer of new features. Indeed, enjoying a retro atmosphere and a vintage touch, it is also a unique and promising journey of discovery for the Diamond League.

In Charléty, athletics feels quite at home in what is a structure designed and built specially for its practice. Its stands house some 20,000 seats and with them comes the assurance of a public audience that is right up close to the action, combined with an of certainty among the athletes that they will be able to share their sporting journey with their fans. On the track lie the memories of what is a truly unforgettable past. More senior members of society will recall watching Roger Bambuck outclassing Ronnie Ray Smith here in the 100m in July 1968, on a cinder track. In 1994, the inauguration of the new Stade Charléty and its brand new synthetic track was marked by its hosting of the final of the Grand Prix IAAF. Five years later, France would go on to welcome the European Cup of Nations. In 2005, the FFA trialled the DécaNation, an invention organised in Charléty through until 2010, before moving out to the provinces. In 2013, it was Jimmy Vicaut’s turn to demonstrate the quality of the track through his very first sub-10-second time in the 100m (9’’95) during the French Championships here.

On the track, on Saturday 1 July, the Meeting de Paris will be offering the very best there is in athletics. A custom. This will be complimented by another key theme of the Parisian leg of the Diamond League, the presence of the French Team’s headline acts. Renaud Lavillenie, Christophe Lemaitre, Kevin Mayer, Dimitri Bascou, all medallists at the Rio Games 2016, have confirmed their participation. There has also been the same positive response from Floria Gueï, French number 1 in the 400m. Five weeks prior to the year’s main global event (4 to 13 August 2017), they fully intend to make the most of the facilities and a resolutely athletic atmosphere to show the audience what they can do.

The ticket office for the MEETING de PARIS 2017 opens this Thursday 13 April. The offer seeks to be both accessible and diversified. Three seating categories are offered to the general public: gold (€75), silver (€45) and bronze (€25). A more collective package, the “Group Pack”, enables families or friends to benefit from lower rates if they purchase a minimum of 4 seats: 60 euros in the gold category, €36 in silver, €20 in bronze. Finally, the FFA (French Athletics Federation) is continuing its tradition of proposing a special offer for its members. They can purchase their seats by using the promotional code FFA2017 at the following respective rates €45 (gold category), €25 (silver) and €15 (bronze).

Bookings may be made now, at the following address: www.billetterie.athle.fr. All the practical information is available on the official MEETING de PARIS website: www.meetingdeparis.fr.