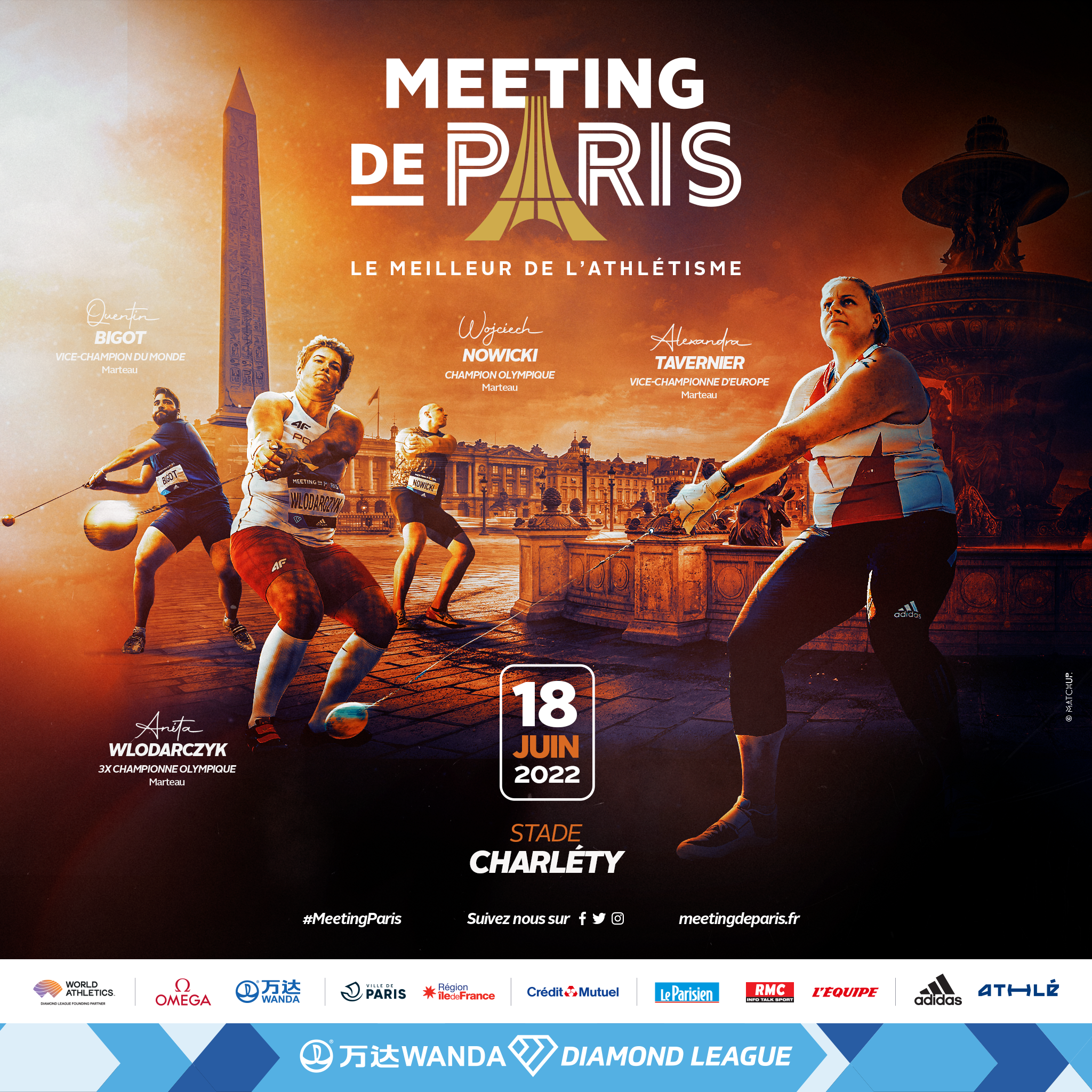 Until now, the atmosphere synonymous with the major athletics meetings is something that Quentin Bigot, Alexandra Tavernier, and their fellow hammer throwers have had to get used to only tasting once or twice a year, during the international championships. As such, the various legs that make up the Wanda Diamond League, the most prestigious circuit in world athletics with its magical tracks and packed grandstands, have not been accessible to them due to concerns about infrastructure and safety. Naturally, this was a heartbreaking situation for both the athletes and their fans, even though a dedicated global challenge was on offer to them.

Although it’s not part of the program as a Wanda Diamond League stamped event, the hammer is now making its big comeback to the competition arena for the summer season. Indeed, scheduled in just after Oslo (16 June) and prior to Chorzow (6 August), a long-awaited and highly logical staging of the hammer event will take place in Paris on Saturday 18 June at the Charléty Stadium. Logical because, together with Quentin Bigot and Alexandra Tavernier, French athletics currently boasts two of the discipline’s specialists to plump up what is a truly stellar line-up. The former, a 29-year-old Athlétisme Metz Métropole thrower and world number two in 2019 in Doha (Qatar), has just thrown a personal best of 80.14 m at the Meeting in Forbach last Sunday. The latter, a 28-year-old representative of Annecy Haute Savoie Athlétisme and French record holder with a throw of 75.38 m, has already secured two podiums at major championships (3rd at the Worlds in 2015 and 2nd at the European Championships in 2018).

“The Federation has pushed hard to bring the hammer throwing competition to the forefront, so this is a fantastic surprise and one we’re very happy about, enthuses Quentin Bigot. On top of that, they’ve gone about it in the right way with a new cage and good equipment. The Meeting de Paris now has the potential to become a wonderful showcase for the discipline going forward.” Alexandra Tavernier agrees: “It’s a fitting reward for us hammer throwers. The Diamond League featured the other three types of throwing events, so we were the only ones missing from the line-up! Things are gradually evolving in the right direction and it’s a genuine pleasure to witness.” Music to the ears of André Giraud, President of the FFA, who believes the move is very much in line with the Federation’s philosophy: “We’re keen to offer France’s top athletes the opportunity to really express themselves in Paris thanks to a very high-quality line-up and a home crowd. Our hammer throwers are very much part of that, of course, and I have no doubt that they’ll take full advantage of this opportunity to shine.”

As an added boost for the hammer throwers, Quentin Bigot and Alexandra Tavernier, who will be accompanied by their promising compatriot Yann Chaussinand, will have the honour of kicking off the meeting in an epic clash against the world’s two best athletes and reigning Olympic champions, Poles Wojciech Nowicki and Anita Wlodarczyk. Indeed, the latter is an athletics legend since her prize haul includes three Olympic golds, four world titles and as many European titles. Suffice to say that the 2022 vintage of the Wanda Diamond League Meeting de Paris is set to be rather special.

A showstopping festival of throwers

The hammer won’t be the only throwing competition to have pride of place in the Charléty Stadium. The women’s discus competition is also set to be thrilling with the entire podium from the Olympic Games in Tokyo, American Valarie Allman, German Kristin Pudenz, and Cuban Yaime Perez in action. Croatian Sandra Perkovic, the long-time undisputed champion of the discipline, will also be competing. A star-studded cast then to rival the unsinkable Mélina Robert-Michon, who will be eager to perform well on home soil. Finally, in the women’s javelin competition, Olympic number two, Pole Maria Andrejczyk, and Australian bronze medallist Kelsey-Lee Barber will likely be embroiled in a fierce duel for the top spot in Paris.