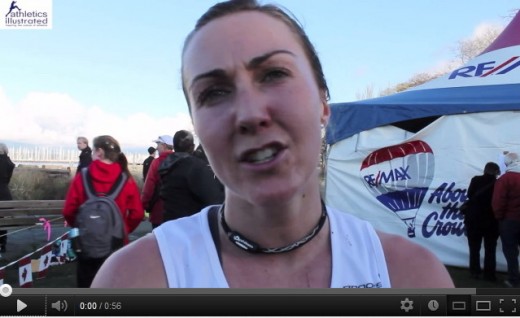 Brown is a University of Toronto Graduate. She has proven to be a strong 1500 and 5000m runner with personal bests of 4:13.12 and 15:33.42, respectively. She extended that range by also winning Athletics Canada’s 2012 10k Road Race Championships at the Oasis Zoo Run, which took place in Toronto on September 22nd. Brown raced to a time of 33:33.6 besting second place finisher Lanni Marchant by over 30 seconds.

TOP OF HER GAME

Asked how fit she is at this time she said, “I would definitely say that I am fitter than I have ever been – especially for this time of the year. I was at the peak for my year at the Canadian 10km championships; then I took a small break to re-group before heading into a four week cycle of high volume and lots of strength work.”

As for her making team Canada it will come down to one race, the nationals, “ I am now moving from work mode to race mode and plan to be ready to rock at the Canadian Cross Country Championships in three weeks,” she said.

The nationals will boast a deep women’s field, “I actually haven’t looked at the entry lists – but I do know that my teammates (from Athletics Toronto), Shelia Reid, Kate Van Buskirk and Kate Harrison all plan to run; so that alone is a solid front group. I imagine this will be one of the better fields that we have seen in recent years. Hopefully this means that distance running is on the upswing for Canadian women.”