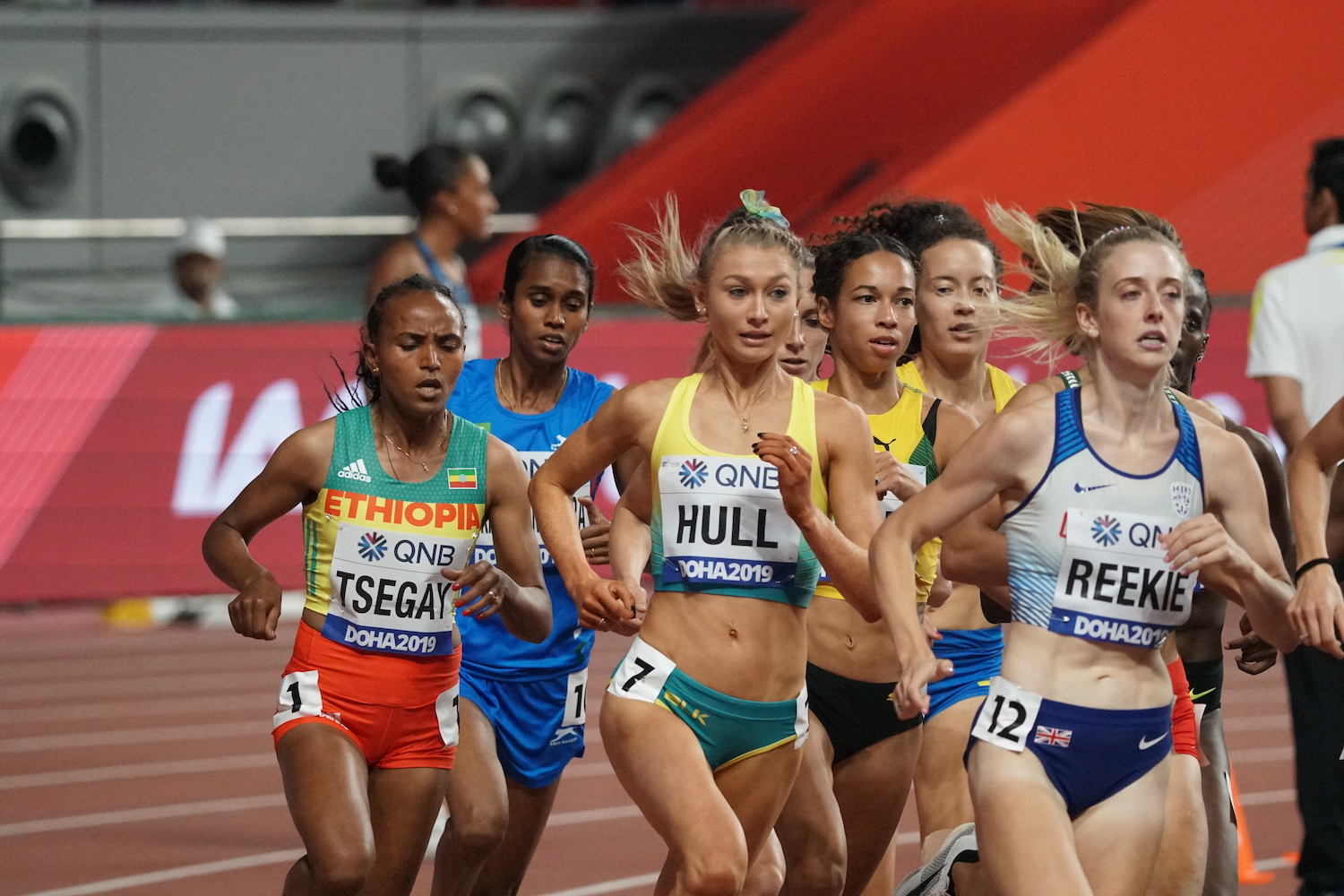 Before the Rio Olympics Australia had never produced an Olympic finalist in the women’s 5000m, but in Rio – all three athletes made the final. Nearly four years on, the event continues to build and in Melbourne on Thursday night we have seven of the top-17 of all-time on the start line, in the strongest ever domestic race.

With the 1500/5000m not possible for Hull in Tokyo and the 5000/steeple combination not an option for Gregson, Olympic places could be secured down the field. Jessica Hull and Genevieve Gregson are in top form after recent PBs/records. Ten days ago Hull broke the national indoor 1500m record, clocking 4:04.12. It was not just a great time, equal to about 4:00 outdoors, but the defeat of German 3:58 1500m and Doha world championships 5000m medallist Konstanze Klosterhalfen. Likewise, Gen Gregson defeated a strong field to win the 2019 Zatopek 10,000m, following her 10th in the steeplechase at the Doha world championships – the best ever result by an Australian in the event.

Our best at 5000m in Doha, Melissa Duncan, will be keen to return to Tokyo where she was based in 2019, but has recently made some changes to her training arrangements.

“Since I left Japan, I have started a new training program, which has really challenged me,” explained Duncan who is now under new coach Joe Bosshard. “I’m not at my best yet, but I’m confident I’m heading in the right direction and hoping to have a good crack on Thursday night.”

Another athlete on the move, is US-based Heidi See. Her form has gone under the radar, including a PB mile in 2019 and stunning 8:52.94 indoor 3000m last month.

“Moving to San Diego to train with Terrence Mahon and The Mission AC has been a huge blessing for me,” said See. “I have been able to find consistency in training, and ultimately enjoying the sport a lot more. The 5000m in Melbourne is obviously quite early in the season, but a great opportunity to begin the upward trajectory for a special year.”

Also on Thursday night two metric mile specialists, the national recordholder Linden Hall and national champion Chloe Tighe, are stepping up to the 12.5 lap event. National 5000m silver medallist in 2019 Paige Campbell, will be competitive and watch out for the improving Novocastrian Rose Davies, who is set to smash her PB of 15:45.

Realistically in the form he is in over a remarkable range from 1500m to 10,000m, Stewy McSweyn looks unbeatable in the national 5000m. Yes, he was surprisingly beaten in 2019, but that was post a long haul flight from Europe where he had just broken the national indoor 1500m record, so he won’t let that happen again.

“Winning my third Zatopek 10 and breaking the Australian 10k record was a very special night. Having so many of my family and friends there in attendance made the moment even more special.”

The Melbourne field has a talented line-up of athletes across a range of events – 1500m and steeplechase, with 13:28 5000m performer and NCAA medallist Jack Bruce the obvious threat. But there is a dark horse who continues to stay under the radar. After a low key late 2018, seemingly everything he did in 2019 was gold. Following a last-minute call up for the world cross country team he would be the second Aussie across the line. Then on the track he slashed his 1500m PB by 3.54 seconds, mile by 5.47 seconds and 3000m by seven seconds. In the 1500m at the world championships he not only made the semi-final, but just missed the final by 0.31 seconds.

After a lowkey hit-out in Brisbane in January, his first major competition of 2020 will be the Melbourne Track Classic.

However, with a long year of competing and training and the focus on Tokyo in July, Denny will have a different emphasis over the domestic season.

“My focus is to really nail technique. For the summer I just want to really enjoy the season and try some new things to bring more interest to throwing,” said Denny.

But he sent an ominous warning of his potential in 2020.

“The last three months have been amazing in training. I’ve been really moving my technique forward and achieving good numbers everywhere throughout my training and I have put a significant amount of size on for this season which has been helpful.”

And what does that mean for the Olympics?

“For Tokyo, I have a big ambition and I think that it’s possible but for now I need to keep doing what I am doing in training and it should take care of itself.”

A number of Paralympic, world champions and world record holders highlight the men’s Para throws program as they push towards Tokyo qualification. In the shot, 4-time Paralympic Games champion, Russell Short is seeking selection for an incredible ninth Games – no other Australian has been to more than six Games. The visually impaired F12 class thrower will be chasing the AA A/B standards of 15.87m/14.72m for Tokyo. He will be competing against London Paralympic Games F20 class champion Todd Hodgetts aiming for the AA Tokyo A/B standards of 16.40m/15.52m. Also competing will be Commonwealth Games and World Para-Athletics Championships medallist in the F38 class shot put, Marty Jackson.

Lining up in the F38 javelin will be Commonwealth Games and dual world champion in the shot, Cam Crombie. With only javelin on the Tokyo Paralympic program, he has had to switch his focus and will be shooting for the performances of 54.43m (A standard) or 46.64m (B standard) for Tokyo. Also in the javelin is 2017 World Para-Athletics champion Jayden Sawyer, who is aiming for the same standards as Crombie.

In the men’s 200m a very rare talent has emerged in John Gikas, 20, who ran 20.66 two weeks ago. Jack Hale’s good form should see him also in the mix, along with five-time national 200m champion Alex Hartmann. Let’s hope we can also see the best from 20-year-old Zane Branco.

The two fastest Australian quarter-milers in the last three years have their first clash in 12 months, when world championships semi-finalist Bendere Oboya lines up against Olympian Anneliese Rubie-Renshaw.