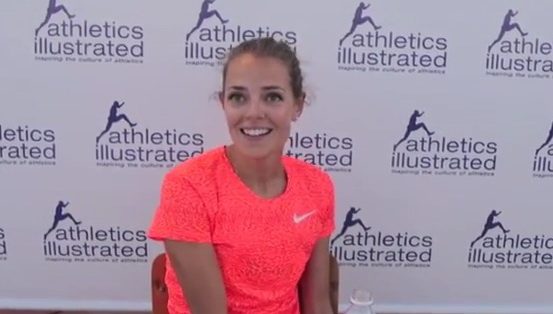 Melissa Bishop-Nriagu, Canada’s all-time fastest 800-metre runner, has one season left to qualify for the Tokyo Olympic Games. With the global coronavirus pandemic forcing the government to limit international travel, the Eganville, Ontario native is faced with not being able to attend a warm training camp as she would normally do during the cold and snowy Canadian winter.

She chose to locate in Victoria, British Columbia for the remainder of the 2021 winter season. Although Victoria is no Phoenix, Flagstaff or Albuquerque, the island city offers the mildest winters in Canada.

“Victoria is proving more and more every day to be the right choice for us. With no opportunities for training camps, we needed a location that was warm enough, and Victoria is that most days. I have no trouble getting out for workouts here, it’s like spring weather in Ontario some days,” shared Bishop-Nriagu.

Victoria is also home to her coach Trent Stellingwerff. He is Canada’s top exercise physiologist and an experienced coach and a former athlete. Directly outside his office at the Canadian Sport Institute Pacific is a new 400m track and an abundance of running trails.

Asked how her fitness is coming along, Bishop-Nriagu said, “Fitness is really coming along great. I think the biggest difference is being able to have Trent’s guidance on an everyday basis. We can make small changes (or big) depending on the day, how I’m feeling, and what the weather is like.”

Bishop-Nriagu began working with Stellingwerff after the only coach she had, Dennis Fairall, passed away in late 2020 at age 67. Fairall was her coach during her time as a University of Windsor Lancer and remained her coach to the end. “Big Dawg,” as she called him saw her through the 2012 London and 2016 Rio Olympic Games.

Fairall was the Lancers’ head coach for 28 years and during that time became the most decorated coach in Canadian university history. He led the Lancers to 25 Canadian University cross country and track and field championship titles.

Bishop-Nriagu has a very realistic chance of medalling in Tokyo. Gold is also a potential outcome, but everything will have to go right beginning with her training stint in Victoria and running right through to her outdoor track season starting sometime this spring.

The only athletes to run faster than Bishop-Nriagu since her 2017 1:57.01 performance are Caster Semenya, Francine Niyonsaba, Ajee Wilson, Natoya Goule and Siffan Hassan.

Both Semenya and Niyonsaba are out due to new intersex rules, where the two athletes will need to limit their natural testosterone production with medication. Something they are not prepared to do. Meanwhile, Hassan from the Netherlands appears to have moved up to the 5000m and 10,000m distances.

Race opportunities in a pandemic

She became a mother in 2018 and responded quickly to training. During 2019, she took in a few domestic races — rust busters after nearly two years off from racing — and demonstrated good fitness by running 4:09.36 in a 1500m race as well as a 2:01.10 800m performance that summer.

As for 2021 race opportunities, what will be available to her, has not yet been made clear as race organisers scramble to put on meets.

“It’s hard to say right now. I believe within the next few months I will have a few opportunities here in Victoria. But for sure I’ll be staying local, at least until springtime. At some point, I will have to travel out of the country to get some races, it’s just a matter of when.”

For now, she has her head down in Victoria being a mom and focussing on getting into top form for a run at the 2020 Tokyo Olympic Games happening this summer July 24 to August 8.