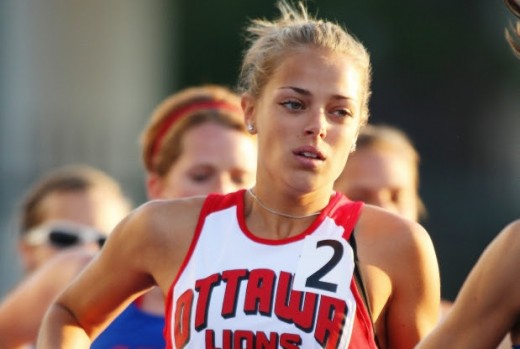 Eganville, Ontario’s Melissa Bishop has her eyes set on competing well in the 2014 Glasgow Commonwealth Games, but first she wants to defend her National Track and Field Championships title from 2013. Nationals take place in four days in Moncton, New Brunswick. Following the national championships, she will be in Victoria for the Victoria Track Classic as part of the National Track League on July 8th. Bishop told Athletics Illustrated, “Time goals are to achieve under 2:00 with consistency. I’m sitting around 2:00 right now, so if I can dip under there (especially at Victoria again) that would be exciting. My hopes are to defend my title at Nationals again, so we will see what it brings. It’s coming up quick!

She is one of Canada’s fastest active 800m runners with her personal best time of 1:59.82, which she accomplished in June of 2012. This is the third-fastest all-time Canadian and second fastest active Canadian result behind number one Diane Cummins with her 1:58.32 from 2001 and Charmaine Crooks’s 1:58.52 from 1990. In addition to competing well, she has her sights on Diane Cummins’ all-time best. “Fitness is looking good right now. I think this season has been one of the better starts in my career in that I’m consistent with my race times. I am hovering around 2:00.5-2:01.0 for the majority of my races,” said the 26-year-old.

Bishop has run as fast as 2:00.52 during the qualifying period, which is the fastest by a Canadian in 2014 and 23rd in the world or 22nd fastest athlete as the first two times were recorded by 18-year-old Cuban Sahily Diago. Bishop will have needed to achieve at least Athletics Canada’s B-standard of 2:01.50 by June 1st to qualify for the Commonwealth Games. The A-standard is 2:00.00. Athletes also need to prove competitive readiness at nationals. Also in the mix are Jessica Smith with her 2:01:42 and Karine Belleau Beliveau with her 2:01.46. Just on the outside are Rachel Francois and Helen Crofts with their 2:02.10 and 2:02.18, respective season bests. Should they also compete in Moncton, they could make for an interesting race for the current top-three athletes.

“It’s been a bit of different year in terms of training and peaks; trying to get standard prior to June 1. Spending most of April in Flagstaff, Arizona (at altitude), doing all my racing to try to achieve standard in May. And June is really about trying to maintain fitness for the rest of the year. I’m looking forward to what’s to come!” shared Bishop.

As for the national record currently held by Diane Cummins, Bishop said, “D’s record is a huge goal to accomplish – I’m sure it is on every one of the 800m women’s minds as well. Running fast is the goal leading into CWG; of course placing is important but my hope is that they come hand-in-hand.“