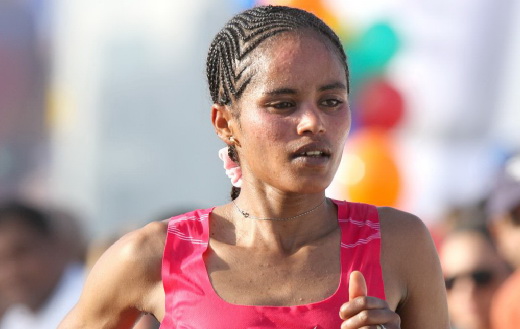 Meseret Mengistu Biru, the winner of the Paris Marathon this spring, will head a strong Ethiopian women’s quartet at this year’s Frankfurt Marathon on 25th October. Ashete Bekere Dido, Dinknesh Mekash Tefera and Meseret Kitata Tolwak, who took the Rome Marathon in March, complete the foursome who are likely to dominate the leading women’s positions. Meanwhile Germany’s Lisa Hahner, twin sister of Anna Hahner, will run her marathon comeback after a series of injuries. The Frankfurt Marathon is an IAAF Gold Label event, the highest category of road racing awarded by the world governing body. Around 15,000 runners are expected for the marathon which finishes in the magnificent indoor setting of the city’s “Festhalle” or Festival Hall. Entries are still open at www.frankfurt-marathon.com.

Meseret Mengistu will arrive in Frankfurt aiming to continue her winning streak. The 25 year-old has been unbeaten after a year and four races. In 2014 she won the forthcoming Cape Town Marathon in 2:30:56, but it was in April this year that she achieved a breakthrough performance. Mengistu triumphed on the streets of Paris with 2:23:26. She also has international experience at the shorter distances, having twice competed at the World Half Marathon Championships where she finished eleventh in 2008 and sixth in 2010.

Victory will be by no means a foregone conclusion for Mengistu in Frankfurt on 25th October. Among her rivals there will be runners with greater experience at the distance. One of them is Ashete Bekere who has a very similar personal best. In Dubai in January she improved to 2:23:43 yet, such was the quality of the field, it was only good enough for tenth place. Bekere has the advantage of knowing the course of the Frankfurt Marathon already, having finished third here a year ago in 2:24:59.

Another Ethiopian who makes the marathon her speciality is Dinknesh Mekash. Since 2012 she has been admirably consistent, running between 2:25 and 2:30 each year. While her personal best is 2:25:09 from Paris 2013, where she placed fourth, she won this year’s Mumbai Marathon in January despite difficult weather conditions with 2:30:00. The victory in India was the biggest success of her career so far.

Meseret Kitata is a relative newcomer to the marathon distance. Just 21 years old she was the surprise winner of the Rome Marathon this March with 2:30:25, which was her personal best. That is impressive progress for a runner who only began competing internationally in 2014.

With the German Championships included in the Frankfurt Marathon, Lisa Hahner will be among the favourites to win the national race. The 25 year-old last finished a marathon two years ago. It was in Frankfurt’s indoor finish of the “Festhalle” where she clocked her current personal best of 2:30:17. A series of injuries hindered her progress in 2014 and this spring, when she suffered a stress fracture in her fibula. However Lisa Hahner feels ready for a sub 2:30 personal best and intends to break the German Olympic qualifying standard for Rio next year. This stands at 2:28:30 and has yet to be achieved by a German runner.