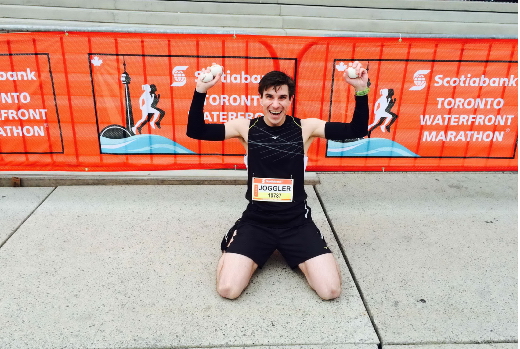 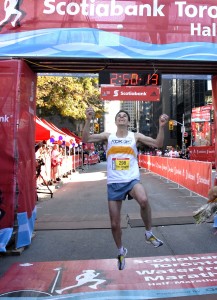 Michal Kapral of Toronto, Ontario keeps a healthy grip on his balls. He spends hours holding them and tossing them about; up and down and back and forth. He teaches others to do the same with their balls.

He is a ball-bearing marathon-running athlete known off all things as a joggler.

Kapral owns the world record for the fastest marathon completed while juggling three objects for the entire distance – an official Guinness Book of World Records record. His personal best time is 2:50:12, while joggling. The former editor of Canadian Running Magazine accomplished this feat at the 2007 Scotiabank Toronto Waterfront Marathon.

If anyone feels offended by getting beaten during a marathon by a person who is juggling, then imagine getting beaten by a juggling marathon runner who also chews gum at the same time, putting to shame the proverbial, ‘can he walk and chew gum at the same time’ question. Perhaps a model multi-tasker, Kapral, has also won a marathon outright while joggling, completing the Trapline Marathon in Labrador in the time of 2:59:32.

He took time away from practice to juggle a few questions for an Athletics Illustrated interview.

Christopher Kelsall: How old were you when you learned to joggle?

Michal Kapral: I was 10 or 11. I taught myself to juggle two tennis balls in one hand and then three in two hands. It’s not very hard, but it’s easy to get frustrated and give up. It’s a lot like running in that way. A lot of people go for a jog and think, “That was horrible, I’m not a runner.” You need to crack that barrier.

CK: At what age did you figure, this is the sport for me?

MK: Once I realized that I wasn’t going to make the NHL, I looked at my tattered copy of the Guinness Book of World Records and thought, “There are tens of thousands of records in there. Somewhere, there must be something that I can be the best at. I just need one thing.” One day I was flipping through the book, which was a sort of Bible to me at the time, and came across the record for the fastest “joggling” marathon, and all at once the angels flew down from above and advised me that joggling was my true calling. They told me that one day I would be the greatest joggler the world has ever seen. And at that moment, I knew my life’s calling was to run long distances while tossing objects in the air.

CK: While rifling through the pages, did you see the record for coin flips off the elbow? Ever try that?

MK: I have tried that! I got pretty good at it, but not world record shape.

CK: What other sports did you play in your youth?

MK: I played hockey for a while but it just felt too normal. In high school I competed in the 3,000m steeplechase, which I think was a gateway to other bizarre sports. My true sports heroes were the ones in the Guinness Book — like the guy who hopped up the CN Tower on a pogo stick, or the guy who ran a marathon in 2:50 in a waiter’s uniform carrying a tray with an open bottle of mineral water and didn’t spill a drop. I dabbled in competitive eating with an attempt to break the world record for most saltine crackers consumed in one minute without drinking any water. It did not go well.

CK: Why, did you inhale some cracker shrapnel?

MK: It felt more like I had eaten concrete powder that managed to set on my tongue. I had never felt so desperate for water, not even as much as the time I joggled the Around the Bay 30K without stopping at any water stations.

CK: This begs the question, how do you hydrate during a marathon, while joggling? Are there rules that allow you to set your balls down while you drink?

MK: I try to pre-hydrate by bloating myself with water before a joggling race. It mostly works, but I did have an awful time at the Chilly Half-Marathon a couple of years ago where I desperately had to pee but wasn’t able to stop. Plus, I had a GoPro strapped to my head, which would have documented the whole process. Generally, you are allowed to stop for water/fuel, but you must come to a complete stop, holding your balls as you drink and then continue. One time in the Boston Marathon, I dropped my balls by accident at the water station just before Heartbreak Hill and then landed in a big puddle of Gatorade. I joggled the rest of the race with sticky balls.

CK: About the GoPro. For an athlete who joggles and chews gum at the same time, it surprises me that you do not have that sort of manual dexterity, you know, to not have to look down to pee.

MK: The GoPro was pointed down. It would have been part of the show.

CK: What was a bigger heart break, the hill or the sticky balls?

MK: It will always be Sticky Balls Hill to me now.

CK: Okay, what else have you tried?

You need to give each ball a good swing back and forth before you release it. The correct ball swing is critical.

MK: My joggling marathon rival, Zach Warren, has challenged me to a juggling unicycle race. He holds the record for the fastest mile in that category. I’ve done some unicycling in my day, so I would consider that. It would be awesome if we crashed. That would be an incredible Failblog entry.

CK: That would potentially go viral. Speaking of barriers, would you say you have joggled the proverbial 10,000 hours yet?

MK: Maybe not quite, but I think the process is accelerated for joggling because you’re doing two things at once. I think you only need 5,000 hours, and I’ve probably done that.

CK: What is the ideal length of time to hold onto your balls, when joggling?

MK: Many novice jogglers make the mistake of releasing their balls too early. You need to give each ball a good swing back and forth before you release it. The correct ball swing is critical.

CK: Ball swing. Like across the body or back and forth?

MK: The balls should swing back and forth with your arm as you run. You catch it, cradle it, swing your arm back and then toss it up as your arm swings forward again. Do that 32,000 times and boom, you’ve done a joggling marathon.

CK: Having to release your balls in a timely manner, do you keep a loose grip?

MK: You must cradle your balls gently in the palm of your hand — squeezing too tight wastes energy and will eventually become painful.

CK: I bet. What is your non-joggling best marathon performance?

MK: That’s exactly how I refer to it now: the non-joggling marathon. I non-joggled the Toronto Marathon in 2002 (not the Toronto Waterfront race) in 2:30:40 and also won the race. It was a good non-joggling day.

CK: Have you ever busked?

MK: I got a busking permit years ago but never used it. It’s hard to busk in one place when your specialty involves running around on a 42.2km course. I did work at the Buskerfest in Toronto a couple of times and taught kids how to juggle. You know, just doing my part for the next generation of up-and-coming jogglers out there.

CK: Have you considered tossing different objects into the air at any time?

MK: People always want me to do knives, flaming torches, bowling balls and the like, but I was thinking live kittens, although I might have some trouble with PETA over that one.

CK: Regarding your upcoming conference. Perhaps that is where the kitties and knives come in.

MK: Yes the gig next week in Washington, D.C. to perform at the Marriott owners’ conference as part the of Fairfield Inn & Suites hotel TV commercial I was in. I’m not sure how well kittens would go over for that.

CK: Live kittens would open up a whole new audience for you considering the popularity of cat videos on YouTube. Perhaps you want to consider that option.

MK: That’s absolutely true. It’s all about finding new channels of interest. I would, of course, be very gentle with the kittens.

CK: Well considering how gentle you are with balls, I am sure you would be. What are some upcoming goals for you?

MK: I’m joggling the NYC Marathon this year and based on my half-marathon time in Toronto, I might have a shot of setting a new record. It would be awesome to run the first ever sub-2:50 joggling marathon. Other than that, I’d like to run a joggling steeplechase race, just because (I would need floating balls in case I drop during the water jump). I’d also like to improve upon my joggling beer mile time from last year, during which I suffered the indignity of a penalty lap for the first time in my beer-miling career. One of these days, I’d also like to do a five-ball joggling marathon.