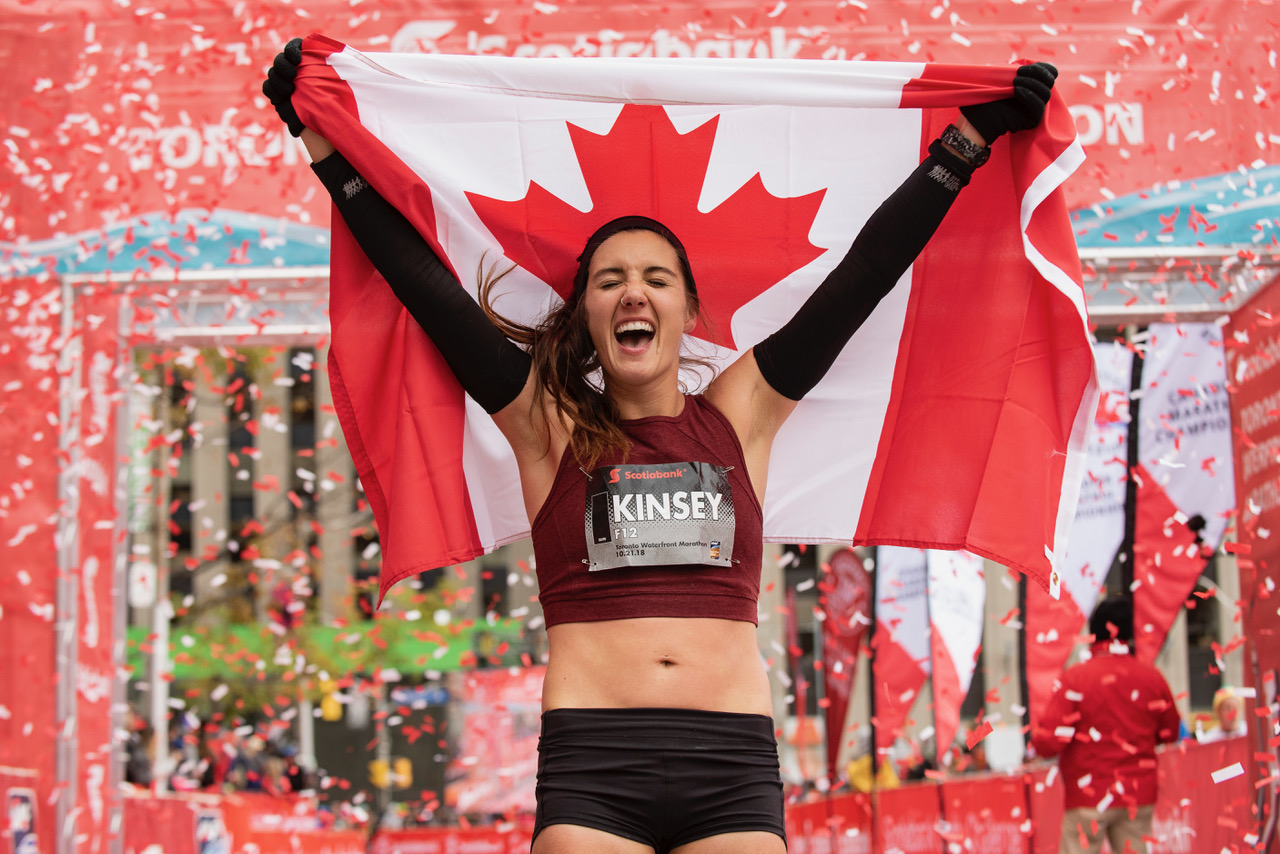 With places on Canada’s 2020 Olympic team up for grabs the Scotiabank Toronto Waterfront Marathon is quickly attracting the best of Canadian marathoners for the IAAF Gold Label race.

Defending Athletics Canada National Champion, Kinsey Middleton, and the surprising Malindi Elmore, who burst on the marathon scene with her 2:32:17 Houston debut in January, have now confirmed they will be on the start line on October 20th for this year’s race which doubles as the Canadian Marathon Championships and ‘Road to Tokyo’ Trials.
They join Canadian men’s record holder, Cam Levins, who announced his entry last month. The first Canadian man and first Canadian woman to cross the finish will be automatic selections for Tokyo, provided they have made the qualifying standard.

Tokyo would not be the first Olympic Games appearance for Elmore. Best known as a 1,500m runner she represented Canada in Athens sixteen years ago having run a personal record of 4:02.64 earlier that summer. She effectively retired from competitive running in 2012 taking up triathlon with her husband and coach Canadian 1,500m Olympian Graham Hood. The couple now have two children and live in Kelowna, B.C.

Elmore’s 7th place finish in Houston was a surprise to many including herself. She is now 39 years old. Still, she views Toronto as the true launch of her marathon career.
“I think that (Houston) was, hopefully, a prelude to what I will able to do in the marathon going forward,” she explains. “It was my first stab at it. I felt when I finished there was a lot of opportunity to get fitter and stronger and execute a better race. I mean, one always thinks that after a good race ‘I can do that better’.

“It was a kind of an unconventional build because I had a baby six months earlier and I hadn’t run a whole lot leading into my pregnancy, during my pregnancy, and post-partum. (Houston) wasn’t on the radar until four months before. On a whim I just said to Graham one day ‘I think I will try a marathon next year.‘ So we went home and looked at the calendar and said ‘Oh, there’s one in Houston in January.’”

Though she’s 39 now she draws inspiration from other ‘mature’ athletes – Krista DuChene was 39 and Reid Coolsaet 37 when they ran in the 2016 Rio Olympics. She notes that more and more endurance athletes are continuing into their late 30’s and 40’s. Moreover, she can imagine herself representing Canada in Tokyo next year.

“Yeah, that would be a dream come true coming full circle on this running career because I retired in 2012 from running on the track and was feeling a bit discouraged with where I left things,” she reveals. “It was a bit anticlimactic. I was disappointed not to make the 2012 Olympics and ready to move on to other life challenges. I took a good long break and have really reinvented myself, finding my love of running again. It’s fun. It would be something I would never have imagined I would be doing again.”

Middleton’s Canadian Championship victory in 2:32:09 has also fuelled her desire to earn a place on the Canadian Olympic team. Though she was born in Idaho she has dual citizenship by virtue of her mother being Canadian.

A year and a half ago she and 2018 US marathon champion, Emma Bates formed the Idaho Distance Project in their hometown of Boise, Idaho along with Bates’ fiancé Kameron Ulmer. He is the club coach. By all accounts, the enthusiasm of this pairing has spilled over into their workouts and their performances. The 26-year-old Middleton was second in the 2019 Vancouver Sun Run behind Canadian Olympian Natasha Wodak, in a personal best 10k time of 32:46. Like Elmore, she also claims she learned a lot from her first marathon and expects to approach Toronto a little differently.

“The cool thing with my first one is that I walked away thinking ‘Oh my gosh, I could have done so many things differently in training’ and just ways to be better next time,” she says adding that she might exceed her previous marathon buildup in which she ran as much as 190km (120 miles) in a week.

“I am thinking of switching the type of hydration that I took. I can have a more scientific approach to that, and I think we were a little conservative with mileage and workouts and everything. I didn’t really hit the wall in my first marathon which is exciting because now we can train to run a little bit faster. That will be the focus this time.”

While Boise lies at around 800 metres (2700 feet) above sea level Middleton often trains at higher elevations taking advantage of the scenic mountains which surround the city. And, like many of her contemporaries, she employs science too.

“I sleep in an altitude tent so that gives me altitude effect,” she reveals. “Then we do a lot of our weekend runs up on the mountain right next to a creek bed. That’s about 5000 feet at the start of that run. The highest point is probably around 6000 feet. It’s a winding mountain road.”

Earning a place on the Canadian Tokyo 2020 team is a firm objective for Middleton and she
understands the enormous task she faces. But then again not many athletes win a national title in their debut marathon.

“That’s been my dream for so many years,” she says smiling and cuddling Hank, her 9-month-old 68kg/150-pound, St. Bernard puppy.

“Since I was a little kid I wanted to run in the Olympics. It would be fulfilling a childhood dream. I don’t want to minimize how difficult it would be, but it would be for sure a dream come true.”

While both Middleton and Elmore are newcomers to the marathon distance and are on the opposite ends of the spectrum, they are serious contenders for an Olympic place.