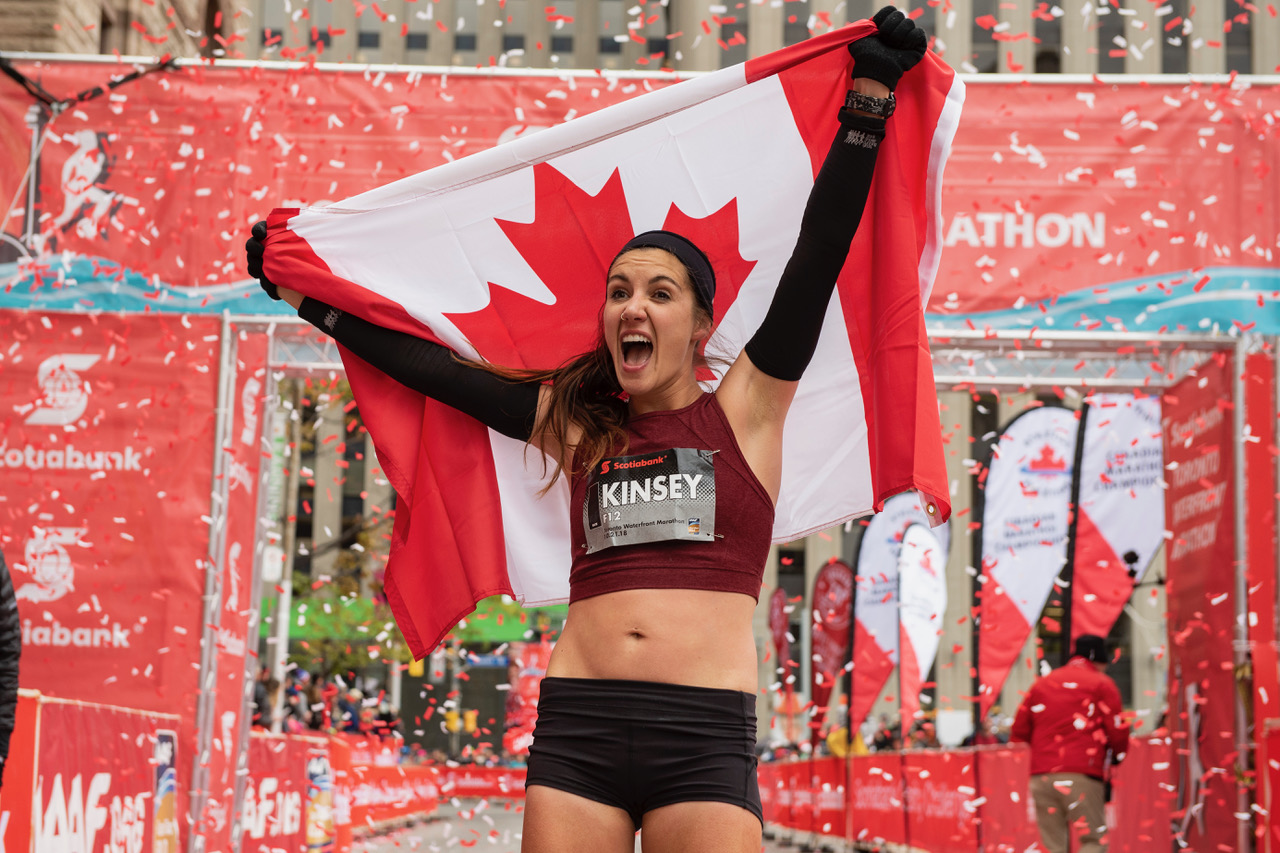 Shortly after being invited to captain a team in the Athletics Canada 42K Relay Challenge, Kinsey Middleton erupted in delight.

In the absence of competitive racing opportunities, this race invitation came as a welcome relief. It was also a chance to have some fun while testing her fitness.

Middleton, who lives and trains in Boise, Idaho, won the 2018 Canadian marathon title and finished with a bronze medal in 2019. As captain of the “The Quarantine Queens,” her four-person relay group, it fell upon her to select teammates who could go head to head against other great Canadian distance runners.

“There were so many people to choose and I was like, ‘I want these three on my team because they are so badass!’” Middleton reveals.

Her teammates for the October 17th -18th event will include Canadian marathon record holder Malindi Elmore (2:24:50), Canadian 10,000m record holder (31:41.59) Natasha Wodak, and Emily Setlack, whose second-place finish at last year’s Canadian championship narrowly missed the Olympic qualifying standard with 2:29:48. At first, Middleton was admittedly a little concerned that these athletes might not share her enthusiasm.

“I was thinking, ‘Should I have some people in backup?’” Middleton recalls. “But every single one of them was like ‘Yes, let’s do it, let’s make shirts. We want to have so much fun with it.’ It’s exciting.”

Surgery on a rotator cuff tear interrupted her training earlier this summer, but now Middleton is running about 130K a week and plans to ramp up the training in anticipation of the relay.

Asked if she wants to challenge any particular athletes, she thinks for a moment before replying.

“I am actually curious to see how many guys’ teams we can beat, because we are a pretty star-studded group of women,” she says, laughing. “That’s what I am excited for.”

Wodak and Elmore have discussed the possibility of Wodak driving three and a half hours from her home in Vancouver to run her leg with Elmore in Kelowna, B.C. Indeed, Wodak has been training hard and running time trials occasionally to break up the monotony.
“I love being part of a team,” the 2016 Olympian says. “That’s why I love cross country. I love the team aspect. I thought this is a really cool event and can bring all four of us, who live apart, together. Now we have something we can focus on and make sure we are training hard.”

Elmore also relishes the chance to be part of a team of athletes who share a kinship as well as respect for one another. When she set her national marathon record in Houston this past January, she was cheered on by her current teammates, who had earlier run personal bests in the half marathon race: Wodak (1:09:41), Setlack (1:11:40) and Middleton (1:12:15).

“I think as soon as you can do something as a team, it’s more motivating. It’s kind of what we miss out not being able to go to big races – all the camaraderie,” says the 40-year-old marathon star who was also a 2004 Olympian over 1500m.

“We are all kind of cheering for each other even when we are racing each other. We are
creating a situation where the team matters more than just our individual results.”

Each member of this formidable team will run 10.55K. Despite less-than-ideal training due to the pandemic, they are confident, and they have every reason to be. All four are terrific 10K runners. A year ago, Wodak won the Canadian 10K title in Ottawa ahead of Elmore (2nd), Setlack (3rd), and Middleton (6th). They will decide which day each of them runs.

“We have a lot of details to work [out], especially what our uniforms are going to look like, and what our tiaras are going to look like,” Elmore adds with a laugh. While the Athletics Canada Relay Challenge will attract some of Canada’s very best distance
runners, the event is by no means restricted to elites. Anyone may assemble a team and join the Open four-person marathon relay by registering on the STWM.ca website.
The cost is CA$135 per team of four, and team members can run their legs anywhere and at any time between October 1 st and 31st.

Each Open relay participant will receive a reward package that contains a New Balance
souvenir T-shirt, a unique medal featuring an engraving of Toronto’s Old City Hall clock tower, discounts from the Running Room, and a personal hand-written “Thank You” note from a Canada Running Series staff member.