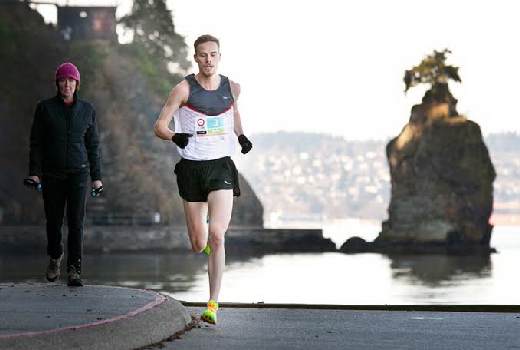 The Canada Running Series commenced Sunday, March 23rd in Vancouver, BC with the running of the Modo Spring Run-Off 8k in Stanley Park. The winners were Vancouver’s Kelly Wiebe in 24:03, who ran from start to finish with the lead and Natasha Wodak who finished in 26:35, after battling back and forth with Rachel Cliff, before prevailing for the win. Cliff won the previous week at the BMO St. Patrick’s Day 5k. Wiebe told CRS, “It came at the end of a pretty big training week, but I still wanted a hard effort, he said in a post-race interview. It was fun out there – A beautiful day. I wanted to make the race honest and make the other guys work. That was the main reason for the hard start. I was on my own after the first kilometre. I guess the pace was a little more honest than I thought!”

Masters (40-plus) champions were Catherine Watkins who won her third consecutive road race in three weeks; she finished in 27:54 and was fourth female. Kevin O’Connor won his second consecutive road race in as many weeks by finishing in 25:31, he finished fourth overall. Watkins told Athletics Illustrated, “It felt good until the uphill finish, but I am super happy with my race today, after three consecutive weeks, I look forward to a down week.”

The top three men were Wiebe, Kevin Friesen of Vancouver and Australia’s Adam Byles who also ran his third consecutive race in three weeks. Friesen and Byles finished in 24:58 and 25:24, respectively. The top three women were Wodak, Cliff in 26:53 and Lindsay Carson of Whitehorse, NWT, she finished third in 27:38. Wodak said, “It was tough coming back after Scotiabank Toronto Waterfront Marathon last October [following an encouraging 2:35:16 debut]…. Today’s race was great! I just wanted a good race. We (Cliff and Wodak) really battled it out. It was pretty much back and forth the whole race. It was a great challenge. Good to have someone out there really going for it. I’m happy!”

Series Race Director, Alan Brookes told Athletics Illustrated, “I am thrilled to see CRS 2014 off to such a flying start! It was a magnificent spring day in Stanley Park, with an impressive wire-to-wire win for Kelly Wiebe, and a great, see-saw battle around the Seawall between Natasha Wodak and Rachel Cliff. Thanks Vancouver – “As Good as it Gets”! And a super challenge laid down for Toronto’s Harry’s Spring Run-Off 8K in High Park to top this on April 5th.

There were 771 finishers today, who enjoyed spring like conditions and beautiful views along the waterfront. Modo – the title sponsor of the race is new for 2014. Modo Race Director Clifton Cunningham said, “It was a great morning today in Stanley Park to kick of the start of the Canada Running Series. Working with Modo, we’re able to showcase some great facets of the community, and deliver a great race for the elite and average runners!”

The next race of the Canada Running Series happens in Toronto at the Harry’s Spring Run-Off 8k on April 5th.