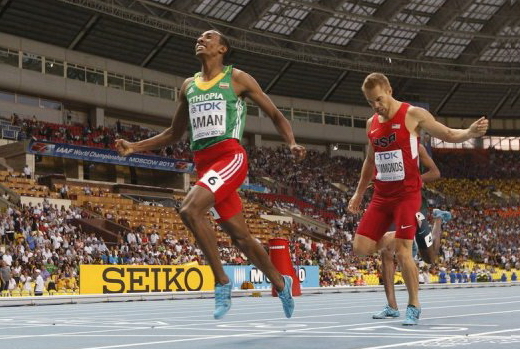 Mohammed Aman is an Ethiopian middle-distance runner who specialises in the 800-metre event, a rarity for an Ethiopian, as the country typically produces world-class athletes that compete over the 5,000m and 10,000m distances and up to the marathon.

Aman grew up in the city of Assela (also known as Asella and Asela), which has produced many of the world’s most accomplished distance runners including multiple Olympic gold medallists, Haile Gebrselassie, Derartu Tulu, the Dibaba sisters and Kenenisa Bekele, who is the current world record holder in the 5,000m and 10,000m events.

The 21-year-old earned gold during the 2013 Moscow IAAF World Track and Field Championships in the 800m.

Aman has recently committed to training in Oregon with the Oregon Track Club under Coach Mark Rowland.

Christopher Kelsall: Assela is a small city, but is rich in its running culture producing such athletes as Haile Gebrselassie, Kenenisa Bekele, Tirunesh Dibaba, and Derartu Tulu, to name a few. Did some of these people inspire your running?

Mohammed Aman: Yes, all of the people mentioned are my heroes. I am so happy to be from Assela and continue to carry the torch for our athletic tradition. The majority of medals and achievements in Ethiopian athletics are from this region.

CK: Your times 1:42.37 and 1:42.83 are getting very close to the top of the world. As 2015 is an IAAF World Championships year, are you planning to peak specifically for that event or will you specifically continue to improve on these times?

MA: The thing that is important is to win championships; this is what I have demonstrated over my career. I continue to train hard to continue to win. If the fast times come with the wins; then I am ready and happy for that.

MA: I ran my fastest splits in the low 49sec.

CK: Okay, for Rio – being two outdoor seasons away – and considering your trajectory so far, will you chase the world record of 1:40.91 or as mentioned, just race and let the times come through competition?

MA: Yes, as I mentioned before; time is not a target for me. My target is to win and to win in Rio; if a world record comes with that win I will do my best to achieve that.

CK: You are still young. Do you continue to grow your weekly mileage volume in the off season?

MA: I am young; but every time I step to the line to run; I do not think about age. I just want to be first to the finish line. The only difference in training is the intensity of the workouts and the strength programs.

CK: Ethiopia produces primarily long-distance runners, being the national record holder in the 800m distance did you have to look outside Ethiopia, perhaps to your biggest rival Kenya (for example to David Rudisha) for 800m inspiration?

MA: You know growing up in the Ethiopian system you are born to be 5,000m/10,000m runners; and I was in this until I was given some chances by my club coaches to train once a week for the short distance. I did not like the long distance and knew I wanted the shorter races.

To answer the other part of the question; I look at David Rudisha as a very respected colleague of mine; and I am proud to say I beat him twice when he was on the top of his game and shape.

CK: You are joining the Oregon Track Club, which is a surprise to many. Is it because many of the Ethiopian greats are long-distance athletes and you need an environment with fellow 800m runners?

MA: I am at a crossroads in my career and the Olympics are right around the corner again. I have so much respect for Ethiopia and the system there and the training; and now there is a very nice middle-distance program coming in Ethiopia; but my decision to join OTC is much more involved than just training. I have heard so much about Coach Mark Rowland and how passionate he is about the sport and his athletes that I wanted to see for myself. The athletes working under him really respect him and look up to him and I honestly am very happy to be a member of OTC.

CK: There are probably many places for you to train with fast middle-distance runners. What was the most important reason to join OTC?

MA: It is all about Coach Mark Rowland and his program. I know some of the OTC athletes from the circuit and I heard many good things.

CK: Life is very different in Texas compared to Ethiopia. What were some of the major adjustments did you have to make to adapt?

MA: Please let me clarify here. In Texas; I did not train there. I was there only three weeks and I never engaged in a full-time training program. Things never materialized for me there. I returned back to train in Ethiopia after three weeks and that was all.

CK: Fair enough. Oregon has a much more temperate climate than what you are used to, are you going to move there or just train part time with the team and facilities?

MA: I am committed to OTC to Rio Olympics; right now I am committed to whatever Coach Rowland has in mind and wherever his program takes us. We just returned from training in Santa Barbara, CA; so I am here to follow their plan.