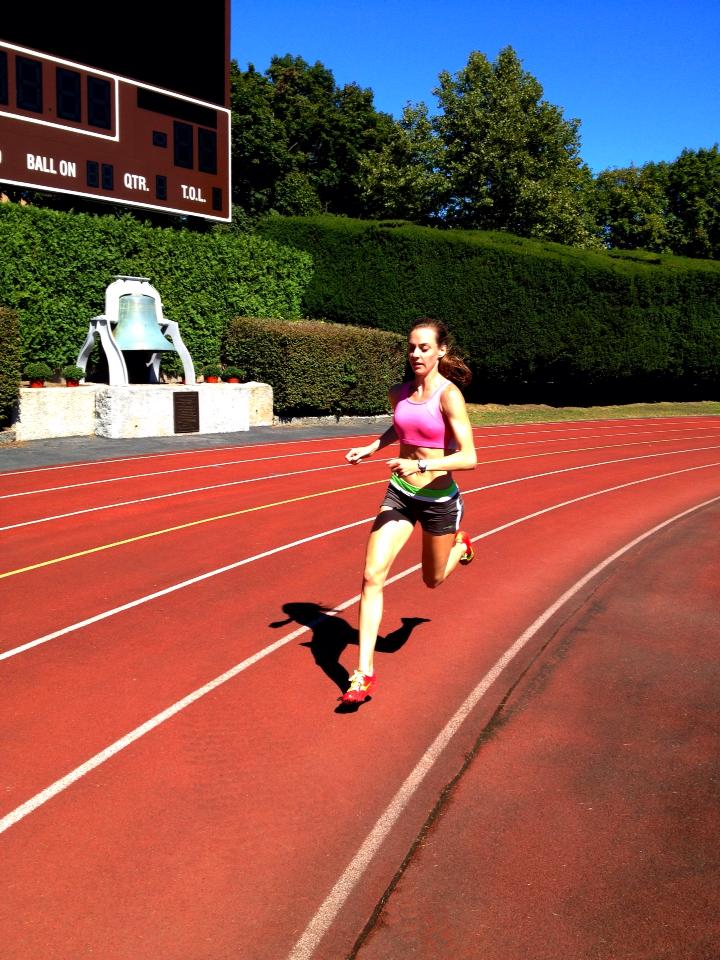 Molly Huddle is one of the top American distance runners over cross country and on the track, specialising mostly in the 5000-metre distance. She owns the American record time of 14:40.76 that she set at the 2010 Memorial Van Damme Diamond League meet in Brussels, Belgium.

The twenty-nine-year-old grew up in upstate New York and attended high school in Elmira, NY. She won several state championships in both disciplines. Huddle went on to become a 10-time All-American in the NCAA representing the University of Notre Dame. She is currently coached by the legendary Ray Treacy.

Treacy originally from Ireland is a well-respected coach in both countries and has had great success in the NCAA. He has been with the Friars since 1978. His brother John was also a Friar as well as a four-time Olympian and twice won the IAAF World Cross Country Championships.

Since her Friar days, Huddle helped the U.S. earn a bronze medal at the 2010 IAAF World Cross Country Championships that took place in Bydgozcz, Poland by leading the team with her 19th place finish. Overall, she has competed in the IAAF World Championships five times, three in cross country and two in track (5000m). She finished 11th in the 2012 London Olympic Games with her time of 15:20.29. Although it appears she is moving up in distance with her recent half-marathon performance where she finished in the time of 69:04, she maintains that she will continue to race the 5000-metre distance, for now.

Of her performance in the New York City Half Marathon, Let’s Run wrote, “…where she faced the great Sally Kipyego …who set the event record Sunday in her debut at the distance, pulling ahead of Molly Huddle near the nine-mile mark and never looking back….

Huddle, who was debuting at the distance herself, had pressed the pace for much of the race alongside Kipyego. But after falling off the lead, she was ultimately caught in the last couple of miles by Ethiopia’s Buzunesh Deba.

Christopher Kelsall: Did you grow up in Elmira, NY? Does Elmira have a good sporting community?

Molly Huddle: There was a small running community at the local upstate NY road races so I always enjoyed seeing the same few fellow crazy runners through the year, and they were always so encouraging. It isn’t the most popular sport there in the high schools and the track and cross country teams usually are low on numbers so I didn’t have a lot of running partners at home.

CK: I read where your Dad was a marathon runner and you took up running in high school partly because of his running, yes?

MH: Yes, he was a 400/800 guy in college then began marathon running in the ’80s. I remember watching some of his road races when I was little and thinking it was cool. All of my three sisters and I tried track at some point and I liked it most.

CK: Did you get to do much running with him?

MH: I ran training runs of three to six miles with him a few times a week during track season when I was in high school they weren’t easy runs either!

CK: Four girls, eh. What commitment level was he at in terms of training? Was he seriously into it?

MH: He has always done track workouts and races at various levels, I don’t think he does a lot of mileage since the marathon days but he has always been pretty into it.

CK: You played several different sports growing up. When it came time to take running seriously was it an easy decision?

MH: I liked the team atmosphere of the other sports so it was a hard decision to go it alone in the running world but I was better at it so I knew it made more sense.

CK: Which of those sports was your favourite?

MH: Basketball was my favourite sport.

CK: You have placed fairly well, comparatively speaking, at the IAAF World Cross Country Championships to your track and road times. Do you enjoy the cross as much as the other?

MH: I struggle more on the cross country course, but I think it’s good for building strength and toughness so I try to embrace it and fit it into the early season if at all possible. I wish there were a few more options for cross country races in the US after college.

CK: Can you describe the differences in racing straight up, like when you set the American Record in the 5000m with your 14:44.76 versus your final in the London Olympics finishing 15:20:29. Is it all about having to deal with hard surges and tactical starts?

MH: The non-championship style races are hard, but the approach for me is to hang on for the ride as it’s usually a pace where my only option is to ride my red-line the whole way without much choice for surges, etc. In a championship race the last 1500 is often closed under 4:05, often not a whole lot slower than what the championship 1500 is won in to put it into perspective, so I have been trying to get myself prepared for that the best I can.

Editor’s note: During the London Olympic Games 1500 metres event, the fastest time was 4:01.03, which happened in the semi-finals, while the gold medal finish time was 4:10.23 by Turkish athlete Asli Cakir Alptekin who tested positive for banned performance-enhancing drugs for the second time in her career.

CK: What sort of workouts would you use to create the stimulus that mimics dropping paces like this?

MH: We do a few reps where I change pace in the middle of the last few sets but mostly trying to push my threshold down and just get stronger so I can be fresh enough to basically pr in the 1500 at the end of the race.

CK: In this day and age it seems athletes frequently change sponsors, how did Saucony win your loyalty? You have been with them for eight years, yes?

MH: Yes I have been lucky enough to be supported by Saucony since I graduated in 2007. So I guess I never changed! I liked the shoes and they believed in me from the start so it was an easy choice.

CK: Which models do you train and race in?

MH: I race in the Saucony cross-country spike, the Carrera. It’s light enough for the track but there is more support for my foot, which is good because I have a lot of foot problems. I train in a mix of Kinvara, Ride and Triumph.

CK: Are you happy with your NY half marathon performance of 69:04?

MH: I am happy with it as a good start and finishing in the top-three was a good result, but I’d like to run another half off a little more volume in training to try to run faster.

CK: Your half-marathon performance seems to be exactly on par with your 10,000 metre best and indicates a 2:28 marathon. Do you have plans to race a marathon in 2014?

MH: I would like to run a marathon before 2016, but I am going to see how the track season progresses and decide from there as you can only do one at a time so I’d have to let go of some races to do the marathon.

CK: You mentioned 2016, so is your goal to run the marathon in the Rio Olympics?

MH: I will likely be on the track in 2016 unless the marathon appeared to be my best event. Testing can tell you so much but eventually, you just need to try one to know how you will handle it.

MH: Yes I may try to run the 10,000 metres at the world level but will stick to the track for championships.

CK: What does a typical training week look like for you?

CK: Being a non-Olympics or Worlds year what are your goals?

MH: I’d like to try to pr in the 5000 and still fit in a few Diamond League races to practice competing at that level. I’d also like to win USA’s (USATF Champs) on the track and fit in some road races too.

MH: It does, but I am interested in the 14:40 barrier at the moment. The 14:30 barrier for me is met with intrigue but also skepticism.

CK: It appears you are intrinsically motivated, not having many training partners around when you were young and being influenced by your father’s running. What drives Molly Huddle in 2014? Is it a love of running or getting up for the big competitions?

MH: I think at this level of running after college it helps to be comfortable training alone and sort of setting up a lot of the details of your training on your own because you often end up in that position. I love competing, especially in front of big stadiums or with crowds lining the streets. That type of atmosphere and being able to push yourself racing against someone else are what drive me.

CK: So what meets are on the immediate schedule for you?