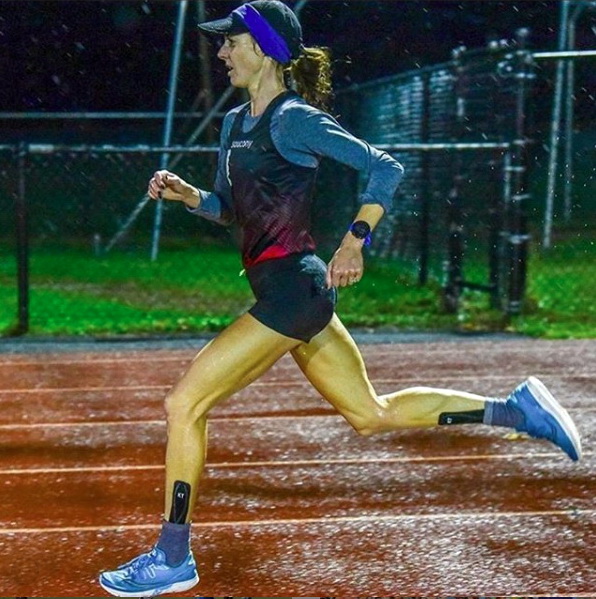 Molly Huddle is the first to admit that she is not in the best shape of her life. And that the three American records that she took down on Sunday in Attleboro, Mass were a little softer than the more classic 5000m and 10,000m distances.

🏃🏻‍♀️Power hour on the track!🏃🏻‍♀️ Trying to put fun, unique, local challenges on the calendar this season to get through the grind . It’s been hard to push myself and nothing feels smooth or easy the last few months, but having some specific goals gets me out the door working harder than I would otherwise. 💜💜💜💜 Remembering the tenacious Nancy Conz today who held the track hour/15k/10 Mile records among other 💪🏼 stats and was a women’s running pioneer, great athlete and New England legend- happy to keep the record in MA for now! 💜💜💜💜💜 Thanks #kurt for hosting another meet, and to @catrocha11 and @a_wheelerr for pacing me and @annmarietuxbury for some of the many soggy laps. The hour went by pretty fast actually! Thanks also to our officials, volunteers and timing, DJ , @lannichiro and @bishopfeehanhs for helping us have a little event to get excited for. (Photo by @urimiscott who did double duty as official and photographer 👍🏻) #finishstronger #runforgood

Regardless, on Sunday, she ran well and to better the three records en-route demonstrates good fitness, no matter who you are and especially when not being challenged.

“I am not exactly as fit and smooth as I’d like to be and races aren’t really reliably happening so we decided to put this on the calendar ourselves and just see what I can do on the day,” said the 36-year-old Providence, RI athlete.

“The hour track record was a fun and different goal to help me get through the season.”

Whose records were they?

Interestingly, all three of the records previously belonged to Nancy Conz. In 1981, she achieved the same records during a 60-minute race, in nearby Amherst, Mass.

Joan Benoit Samuelson was once quoted as saying, “Nancy was a great runner. She came onto the scene rather quickly and climbed quickly as well. She was a real tenacious runner. She gave it everything she had. She beat me several times when we went head to head. She was tenacious and worked very hard.”

“This was a bit different, although it’s well off my PR shape it gave me a good reason to push when motivation has been lacking,” added Huddle. “It’s a good day to remember Nancy Conz who held the previous record also in Massachusetts’s. She was a local running hero and sounded like an amazing woman!”

Cat Rocha and Abbey Wheeler, also coached by Ray Treacy, paced around 5:20 for the first 5-6 miles.

Asked why there are so many records and bests being run during this odd pandemic year, Huddle said, “I think the other records this year were impressive, maybe from athletes who were intending to peak for the Olympics so were headed for the shape of their lives anyway.”

Huddle will surely make her third Olympic team in whichever distances she chooses to compete in, should the 2020 (2021) Tokyo Olympics take place.