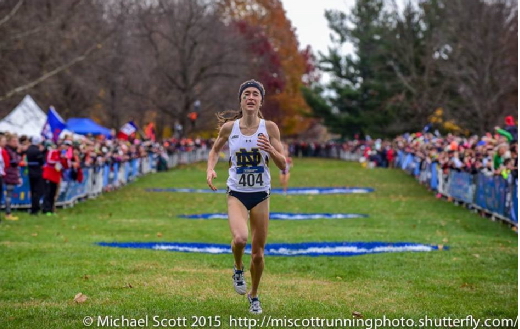 Molly Seidel is a two-time NCAA champion. After years of injury and accidents, as well as being on a training program that did not work for her, she surprised herself as well as the greater running community by winning the 10,000-metre NCAA Championships. She won in the time of 33:18.37.

With the 10,000m win to her credit, she put her head down and trained with determination during the summer of 2015, with the goal of winning the NCAA cross-country championships. She did it.

Seidel grew up in Hartland, Wisconsin, played many different sports but fell in love with running in high school, much to the surprise of her parents who just wanted her to have the opportunity to play various sports without pressure.

Seidel is coached by the associate head coach of the University of Notre Dame Fighting Irish, Matt Sparks.

Christopher Kelsall: Besides field hockey, alpine skiing and running, what other sports did you grow up playing?

Molly Seidel: I was into everything including sailing during the summers, soccer, basketball, which I played very badly for a short period of time [laughs]. Of course, there was the field hockey and alpine skiing, but I was also into cross-country skiing, which I still do during the winters. My parents just wanted me to have the opportunity to play lots of sports without pressure. They didn’t want to push me into just one thing.

CK: So are they active themselves?

MS: Yes they are.

CK: Were they athletes when they were younger?

MS: Yes my dad played soccer and skied competitively in College. My mom was always active. She was a cheerleader in high school.

CK: So were they surprised that you chose running for your college career?

MS: Yes they were, running just came out of left field. But my parents have been super supportive. I get no pressure from them at all. It was nice to come into the sport on my own rather than being forced into it. My mom doesn’t know a lot about running, so she is just happy for me regardless of how I do [laughs].

CK: So were you surprised by how you performed during your first year at Notre Dame?

MS: Well yes. I didn’t run well at all. It was basically a comedy of errors and injuries. It was frustrating and I got down on myself about it.

My freshman year was not good at all, I didn’t race track at all. Coming out of high school where I had a great career, university running just kicked me around with weird accidents and injuries. Coach Sparks’ job now is to protect me from myself. Keep me from getting into accidents. He is basically my life manager [laughing].

It was tough after winning cross country nationals in high school.

First-year there was mold in my dorm room and I got fairly sick from it and yet still tried to compete hard, but was not performing as well as I would have liked to. I was not being competitive and was really just making it through workouts and races. Because of the sickness, I was coughing up blood after races, sometimes had trouble breathing and then I had double stress fractures in my sophomore year.

MS: Well it doesn’t sound great to say I wasn’t surprised to win the NCAA cross country championships, but I really focussed on it all summer. I really wanted to go for the win. My training was all geared for that one race, so I wasn’t completely surprised; I am very excited about it.

CK: It is still sinking in?

MS: Yes, it is still sinking in.

The competition is really strong, there is such a high level of competition at the national level. Being able to come away with the win is a very special thing.

Much of my wins are owed to the support of Sparks and all of my teammates, they made so much of a difference throughout. I could have never done it without all of the girls on my team. I don’t have a lot of self-confidence and my team is like my family. They help me be the best person I can be. Sparks has been enormous on helping me get to where I am physically and mentally. I owe so much to him too.

CK: So was it Coach Sparks who figured out that the previous training program that you were on was not working; all that interval training and intensity?

He understands how I think better than I do. What he does really well is he keeps me from doing too much. He has had to keep me reigned in to stay patient – being smart with my training and not running myself into the ground. He told me, “save it, save it for the end of the season,” Which of course worked out real well.

CK: Where do you think he draws training inspiration from? Is it all about that base?

MS: A lot of his training comes from what Lydiard training is like, good volume in the off season. Work on building that aerobic base. Lydiard as well as Wetmore – building that killer base, making sure you are strong – there are a lot training similarities, I think so anyway. And I really like that kind of training.

CK: What are your post-collegiate athletic goals?

MS: I am graduating this spring, but still have a fifth year of eligibility. Well first I want to get a strong base of training in over the winter, so I can have a great final track season. I am done for cross country eligibility now but have one more season of indoors, which I am doing as well as my final outdoors season, which all of my training is pointing towards.

MS: I want to keep my options open.

MS: I think it is every athlete’s dream to run in the Olympics. That is the ultimate dream. So yes I would of course. I am not sure what distance I will compete in after college.

CK: You seem to prosper off of distance training, so we know middle-distance is out.

MS: Someday I’d love to do the marathon. I have done some long trail races, no ultras or anything like that, but mountain runs – I for sure love the longer races. Post-grad, I would like to move up. I am such a big fan of tempos and grinding it out over longer runs. Definitely, If I was going to switch I would going up [laughs].

CK: What are you studying at Notre Dame?

MS: I am doing a double major of Environmental Studies and Biological Anthropology and a minor in sustainability. I am writing my thesis right now.

CK: So you must have a daily nap scheduled.

MS: [Laughs]. I do not have time to nap! I love it. I get bored when I do not have enough to do. I love taking classes. The stuff I get to study is so fascinating, so I really enjoy it, which warrants the late nights studying – wouldn’t trade this for anything.

MS: Post-grad, I am considering a Ph.D., but I am not sure which direction to go. I will need to be more decisive about it before I make a decision. Probably after running or at least give myself a couple of years before I decide to go for a Ph.D. This is a whole ‘nother level of sleep deprivation.

CK: So for the immediate future, what does your winter base training look like?

MS: Getting good base in winter break includes getting in over 90 miles per week of running, but I will also be doing some cross-country skiing. I need to put in the mileage to get strong again.

CK: Will you substitute running for the skiing?

MS: Well, I will substitute a morning a shakeout run, so I will typically go 70-75 miles per week with lots of cross-country skiing or depending on the conditions and how much snow there is, I might not have a choice between running or skiing. Without cross-country skiing, I am usually running 90 miles or more.