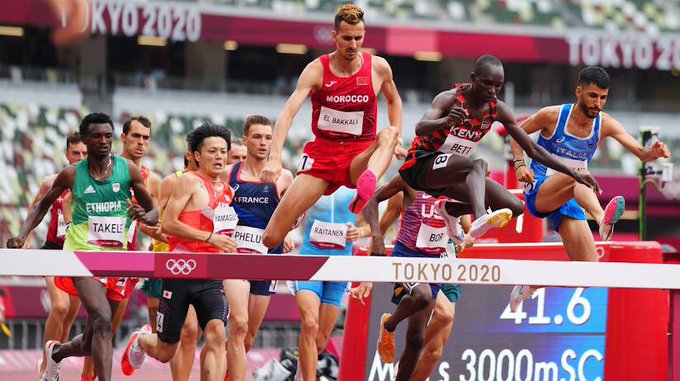 Morocco’s Soufiane El Bakkali takes men’s 3000m steeplechase gold medal at the time of 8:08.90, in a dominating performance over Ethiopian Lamecha Girma who clocked an 8:10.40 performance. Finishing third was Kenyan Benjamin Kigen finishing in the time of 8:11.30.

Matthew Hughes, the Canadian record holder at 8:11.64, finished in sixth place the best ever result for a Canadian male in this event. He is also a two-time sixth-place finisher at the World Athletics Championships.

Surprisingly, Kenyan Abraham Kibiwott finished in 10th place and three seconds back of Hughes. He had won Heat 2 finishing a second ahead of Hughes to qualify for the final.

“I’m content with that … happy too. You look at the way my season started and, mentally and physically, I wasn’t in a great spot,” said Hughes. “Overall, I can’t be disappointed with that.”

Teammate John Gay gutted through the wet conditions in Tokyo to finish 15th in the final. “Every time I step up another level, I realize why it’s a step up in the first place. I think that was totally evident tonight,” said Gay. “I know it’s just another notch in the belt and something I can lean on in future years. We’ve got so many championships coming up in the next three years and I’m so grateful to have this opportunity.