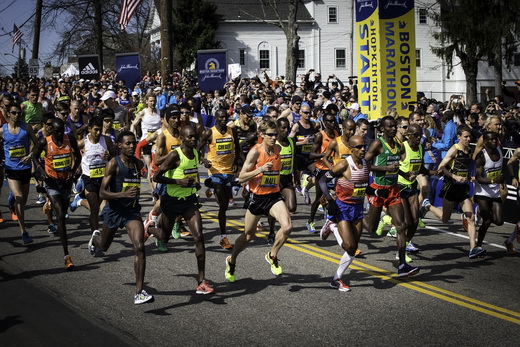 The movie BOSTON is a slick, full-length documentary on the history of the oldest and longest-running marathon in the world. It should be seen. While the feature has some very minor faults, fans of the iconic marathon will either not notice or will forgive Director, Producer, and Cinematographer Jon Dunham for his over-the-top love of the event.

There is something for everyone in this homage. Dunham, a 25-time marathon runner, smartly trotted out many of the big names who have won Boston. For most of the people who run Boston, there is an emotional draw from the Wellesley girls who make signs on request, scream and demand kisses from runners to the masses who high-five spectators throughout. In Sacramento, at the California International Marathon, there is a bell that finishers can ring, if they run a “BQ” – a Boston qualifying time – some cry at qualifying, while others simply express joy, CIM is fast; the bell rings a lot. Like Boston, it is run in one direction and is a net downhill route.

For serious runners, Dunham brings out the Boston royalty, although he didn’t get everyone, it could be argued that there was more than enough. There was plenty of personality stuffed into the film, for example, the legendary two-time winner, Toshiko Seko, Japan’s greatest, who once stated, “The marathon is my only girlfriend, I give her everything I have.”  During Boston, in one hilarious segment, Seko says of Bill Rogers. “Can I say he looks like a rabbit, he is cute with those innocent eyes?”

Seko was meticulous in his training and ruthless as a racer, but so was Rogers, the conscientious objector, former smoker, plays counterpoint to the legendary Frank Shorter, who he sat side-by-side with and joked like old pals – it was a Beatles reunion. 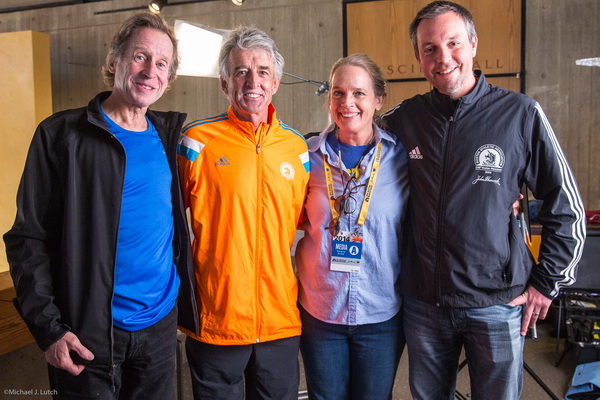 There is an unconfirmed legend that Boston Billy, during some marathon or another, pulled a ham sandwich from his shorts and ate it.  After watching Dunham’s Boston, it should surprise no one.

Australia’s Rob de Castella, the tough-as-nails, practical joker who, as it turns out, is a man full of empathy for the Aborigine people of Australia and their plight with poverty is featured.

There are moments where Deek moves the audience with his coaching of several everyday native Aussies in their efforts to run for health, including one who was formerly obese. Although we never find out, Deek it appears is determined to get them to Boston, that’s their goal. It was an emotional piece.

Dunham was smart in bringing out the first lady to run Boston, Roberta “Bobbi” Gibb, the year before Katherine Switzer first ran it in 1967. Switzer ran under the pseudonym, K. Switzer to get past the gender-aware officials and Race Director Jock Semple. Switzer is more well-known and is given credit for inspiring women to run since, which is valid, but it was Gibb, who first ran the race and won it three years in a row. She was posthumously credited for doing so by the Boston Marathon.

The ever posh and well-spoken Roger Robinson made an appearance. The man is an encyclopedia of distance running lore. For shooting a documentary on the history of the marathon, Robinson is a required voice.

The Boston story would not be complete without introducing the audience to winners such as both John Kelleys, John A and John J, Clarence DeMar, Tom Longboat, Amby Burfoot, Catherine Ndereba – a four-time winner – and American Join Benoit amongst others, but unfortunately did not include Lorraine Moller and Allison Roe of New Zealand or three-time winners Fatuma Roba of Ethiopia and German Uta Pippig.

Canadian Jacqueline Gareau, who won in 1980 had her moment of glory stolen from her due to cheater Rosie Ruiz interloping. I am not sure it was of great taste to drag the obviously mentally-affected Ruiz through the mud once again, perhaps a cursory mention would have sufficed. It’s a sad story.

One poignant and classy omission was when the story moved to the 2013 bombing. Dunham left the bombers names and faces and terrorist affiliations out of the movie. I am not so sure he even referred to the two-bomb attack as terrorism. It was a great move to focus on the victims and more-so the heroes that took to the streets to assist with the injured and the dying.

Part of the film documented the leaders of the 2014 race. Americans Meb Keflezighi and Shalane Flanagan led early and throughout. Keflezighi at the age of 39 won the race in the time of 2:08:39, while Shalane Flanagan – a Boston native – got eaten up by the pack to finish seventh. She did, however, run a new personal best time of 2:22:02 and led the top women through 19 miles (30K) at a pace that drew out four new Boston record times; they have Flanagan to thank for that. Kenyan Rita Jeptoo is still credited with that win; however, she was later banned for testing positive for performance-enhancing drugs.

Marathon history dates back to the earliest conceptions of democracy to 490BC when the Greeks defeated the invading Persians on the Plains of Marathon. It was foot messenger Pheidippides who ran 25 miles to Athens to announce victory, before dying shortly after.

Athens was the site of the first modern Olympic marathon, created in honour of Pheidippides in 1896. For many marathon runners, unbeknownst to them, they are literally exercising their democratically-created freedoms. A marathon race is like the original Memorial Day, an honour to those early Greeks who fought for our freedoms on the Plains of Marathon.

Boston is not a certified course by the worldwide governing body, the International Association of Athletics Federations (IAAF), because it runs in just one direction from start to finish and has a net drop greater than 1m/per km. It is not the largest marathon by numbers, New York takes that at over 50,000 participants, it is also not the largest charity race as Virgin London claims the top spot with over a billion dollars raised since 1981, but it is the most iconic and most celebrated as thoughtfully told by Jon Dunham.

Boston, at two hours and two minutes, coincidentally runs as long as the current men’s world record of 2:02:57. Like Dennis Kimetto in Berlin, it moves fast. It is a very enjoyable watch that could have been made 30-minutes longer without an argument from the audience.

Production Credits:
Boston is presented by John Hancock Financial, in association with the Kennedy/Marshall Company.
The film is directed by award-winning filmmaker Jon Dunham, well known for his Spirit of the
Marathon films, and produced by Academy Award-nominee Megan Williams and Eleanor Bingham
Miller. Executive produced by Academy Award-nominee Frank Marshall. The score is composed by
Emmy Award-winner Jeff Beal and recorded by the Boston Symphony Orchestra. The film is narrated
by Academy Award-winner Matt Damon.