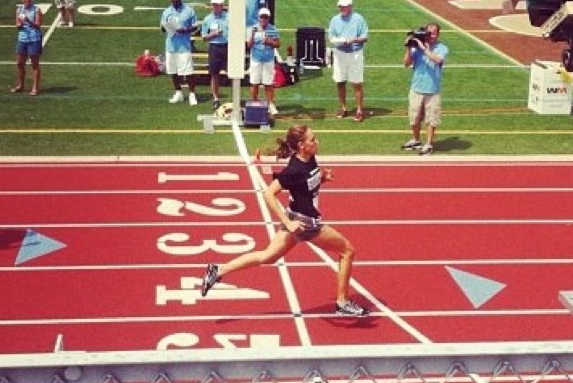 Four months ago, Winnipeg, Manitoba native, Victoria Tachinski, announced her commitment to Pennsylvania State University for the 2017-2018 school year. It was one of the many schools that attempted to recruit her for good reason.

The Penn State Nittany Lions compete in the Big Ten Conference of the first division of the NCAA.

In 2015 and 2016 she competed in the IAAF World Youth and IAAF U20 World Track and Field Championships respectively.

In choosing Penn State, Tachinski simply felt that the school was the best fit for her and that she had already built a great rapport with Coach John Gondack.

Like many aspiring track athletes, she grew up playing several different sports. For her it was track, hockey, football and basketball.

Asked of when she decided that running would become her primary sport, she told Athletics Illustrated, “I would say that for my whole life I have always known that running is what I was born to do. So, for me, it wasn’t even a question if I was going to be a runner or not. Running is what I’ve been passionate about and it’s been my identity.”

Tachinski comes from an athletic family and has been encouraged to play several sports throughout her life.

“My parents have pushed me to participate in other sports and through these sports I have gained so much skill that’s aided me in my running career,” shared the Vincent Massey Collegiate student. “I would say that over my life I played other sports to aid my running. I was able to get in some cross training and keep active in different ways.”

Tachinski played her final year of high school as a three-sport athlete, playing basketball and hockey in addition to her aspiring middle-distance track career. The two sports have parallel seasons and she has recently had to say goodbye to both sports as she plays the final games of her regular season in both.

“For my senior year in high school, it was important to me to continue to play hockey and basketball. I saw it as my last opportunity to play competitive team sports with my track career at the same time. Hockey and basketball have also been huge parts of my life, so I wasn’t really ready to say goodbye to them. So I decided that during my senior year I would play both but keep track as my priority.”

Balancing all three schedules was not easy. Some days she would have a workout in the morning, go to school for the full day, practise hockey after school, then join the track team for practice. Sometimes she would finish her night with basketball.

“I was so lucky that my coaches were so accommodating and understanding. They all understood how busy I was and that sometimes I had to miss a practice or a game. Overall participating in high school sports made my high school experience so much more memorable. Even though it was very stressful some days, I am so thankful that I was able to play all three.”

Tachinski is so used to being busy with three different sports that she will have to make an adjustment. Some of that adjustment may come in the form of higher training volume, as expected with a university track career, as well as her studies in the program that she chooses, which is Microbiology or Biotechnology.

The hardest part about leaving hockey and basketball are not seeing her teammates every day in practice.

“I would also say that I’ll miss training in different ways. Running can become pretty repetitive, so I found it fun and exciting to train myself through other sports. During training I would be practicing so many different movements, so I believe that was very helpful for injury prevention and muscle growth. I am used to having such a busy life with having multiple practices a day in different sports. So that will also be an adjustment I will have to make.”

“Overall I say that I will miss everything about hockey and basketball, and it’s going to be very hard trying to get used to my new life. I’ll miss my teams, playing, practicing and the skills that are involved with both.”

In contrast, she can now focus singularly on her running. For Canadian running fans, she will add depth to the already thick field of middle-distance talent.