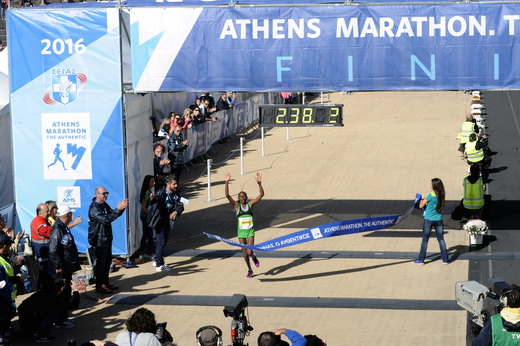 An increasing number of cities today stage marathon races as part of their annual menu of events but there is only one which can claim to be the original: The “Athens Marathon. The Authentic“ will be run on November 12 on the original course with the start in the small coastal town of Marathon and finishing in the old Olympic arena of Athens, the marble Panathenaic Stadium. It was this same route which the runners trod for the first Marathon of modern Olympic era in 1896.

The unique historical background to the race attracts more and more runners to the Athens Marathon each year. A record number of 18,500 athletes have entered the race over 42.195km, an increase of more than 1,000 than a year ago and the maximum limit for the event’s capacity.

The unique historical background to the race attracts more and more runners to the Athens Marathon each year. A record number of 18,500 athletes have entered one of the most international marathon races of the world over 42.195km, an increase of more than 1,000 than a year ago and the maximum limit for the event’s capacity. Out of this participation, an amazing 8,500 runners will travel to Athens from more than 100 countries from all continents. Additionally the Athens Marathon is recognized by thousands of the sports lovers and receives attention throughout the world. Among those entered is the winner of the women’s title last year, Nancy Arusei. She and her fellow Kenyan Milton Rotich will be the favourites for the race on November 12.

Last year Nancy Arusei sprang a surprise on her marathon debut. At her first attempt at the marathon, the Kenyan ran the extremely tough course in 2:38:13. “I would never have thought it possible that I could win,” said Arusei after the most significant win of her career. This year she finished second in the Agadir Marathon in Morocco, clocking 2:29:12 but the course was found to be short of the official distance so her time in Athens remains her personal best.

The women’s race will provide a chance to renew the contest between first and second place finishers of last year in the “Athens Marathon. The Authentic“. Kenza Dahmani of Algeria finished just 15 seconds behind Nancy Arusei with 2:38:28 in 2016 and has since improved her best to 2:33:21 with victory at the Lodz Marathon in Poland in April. The contest for top honours is also likely to feature Hemila Wortessa. The Ethiopian should be a contender after her third place at the Wuxi Marathon in China this year in 2:31:50.

The men’s favourite is Milton Rotich of Kenya although the hilly course makes predictions a difficult business and the race from Marathon to Athens has consistently thrown up surprises. The 33-year-old Rotich has a personal best of 2:08:55 and, like Nancy Arusei, thought at first that he had bettered that performance this year when he ran 2:07:57, also in Agadir. Among his challengers should be Chala Damessa and Samuel Kalakei. Damessa of Ethiopia won the Gunsan Marathon in South Korea last year with 2:11:45 while Kenya’s Kalalei achieved his best time of 2:11:47 in Metz in France last year. In 2017 the 22-year-old finished third in the Stockholm Marathon in 2:12:36.

More information and online entry is available at: www.athensauthenticmarathon.gr