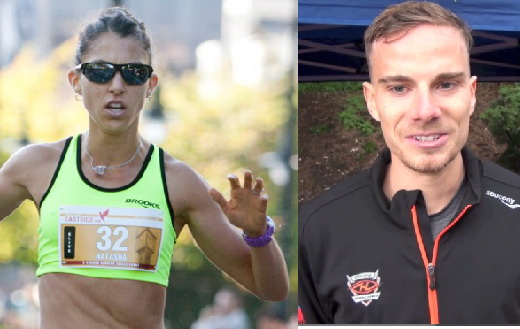 Natasha Labeaud returns to the Vancouver Eastside 10k September 19th ready to defend the title she won a year ago, but also as a much more experienced athlete.

Though she represented Canada at the 2014 Chiba International Ekiden, it was only this past March that the 27 year old ran in her first global championships, the IAAF World Cross Country Championships in Guiyang, China.

She finished 60th there helping the Canadian team to a 10th place finish. Then this summer her 8th place finish in the Pan Am Games 5000m final illustrated her tremendous versatility.

Labeaud calls Kelowna, B.C. home but resides in San Diego, her husband Marco Anzures’ home town. Although her father was born in New Orleans her mother is from Montreal and so she has had dual citizenship since birth. Marco serves as coach and sometime training partner to his wife.

“I race in B.C. fairly frequently, and will be racing there more with the indoor season and additional road races,” Labeaud said this week. “I remember that the Eastside race was organized well, there were great volunteers, and wonderful crowds. The course is hilly, but there are some parts of it that you can really get rolling.

“I am excited and confident about racing the10k distance as it is part of my training for a major race this fall.”

Labeaud, who completed her Master’s degree in journalism at Georgetown University, must go to extraordinary lengths to keep her health and fitness.

She was diagnosed with Celiac Disease in 2006 and can only eat unprocessed foods while avoiding wheat, barley and oats. It can be even more difficult when she travels. But like the champion she is, Labeaud has had to learn to adapt.

On Saturday she will face Natasha Wodak, the Canadian 10,000m record holder (31:41.59), who raced that distance at the IAAF World Championships in Beijing where she was 23rd. The race is part of the 2015 Canada Running Series with points going towards an overall prize.

Wodak is coming off a busy weekend where she was a member of Rachel Cliff’s wedding party Friday, then flew to Toronto and won the Canadian 5km road championship in 15:58.

The men’s race is no less compelling. A year ago Kelly Wiebe set a new course record in the event when he beat his BC Endurance Project training partner, Geoff Martinson, by over a minute. His time was 29:20.

Wiebe, 26, is also a versatile distance runner having finished 50th at the 2015 IAAF World Cross Country Championships and is a past winner of the Vancouver Sun Run. He has just returned to Vancouver following ten weeks of altitude training in Flagstaff, Arizona.

“My fitness level is okay, not my best,” he reports. “Training has been going well over the summer – I have been very consistent – it’s just I haven’t been doing much specific 10k work yet. I have mostly just been developing a base for the fall season.”

The race starts at 8:30 a.m. on the Dunsmuir Viaduct traversing the Eastside and Gastown before returning to the Viaduct.

Four charities are front and centre: the Downtown Eastside Women’s Centre, Watari Support and Counselling, Greater Vancouver Food Bank and new to this year, Breakfast Clubs of Canada. They stand to benefit from the more than $12,000 already raised – double the 2014 amount.