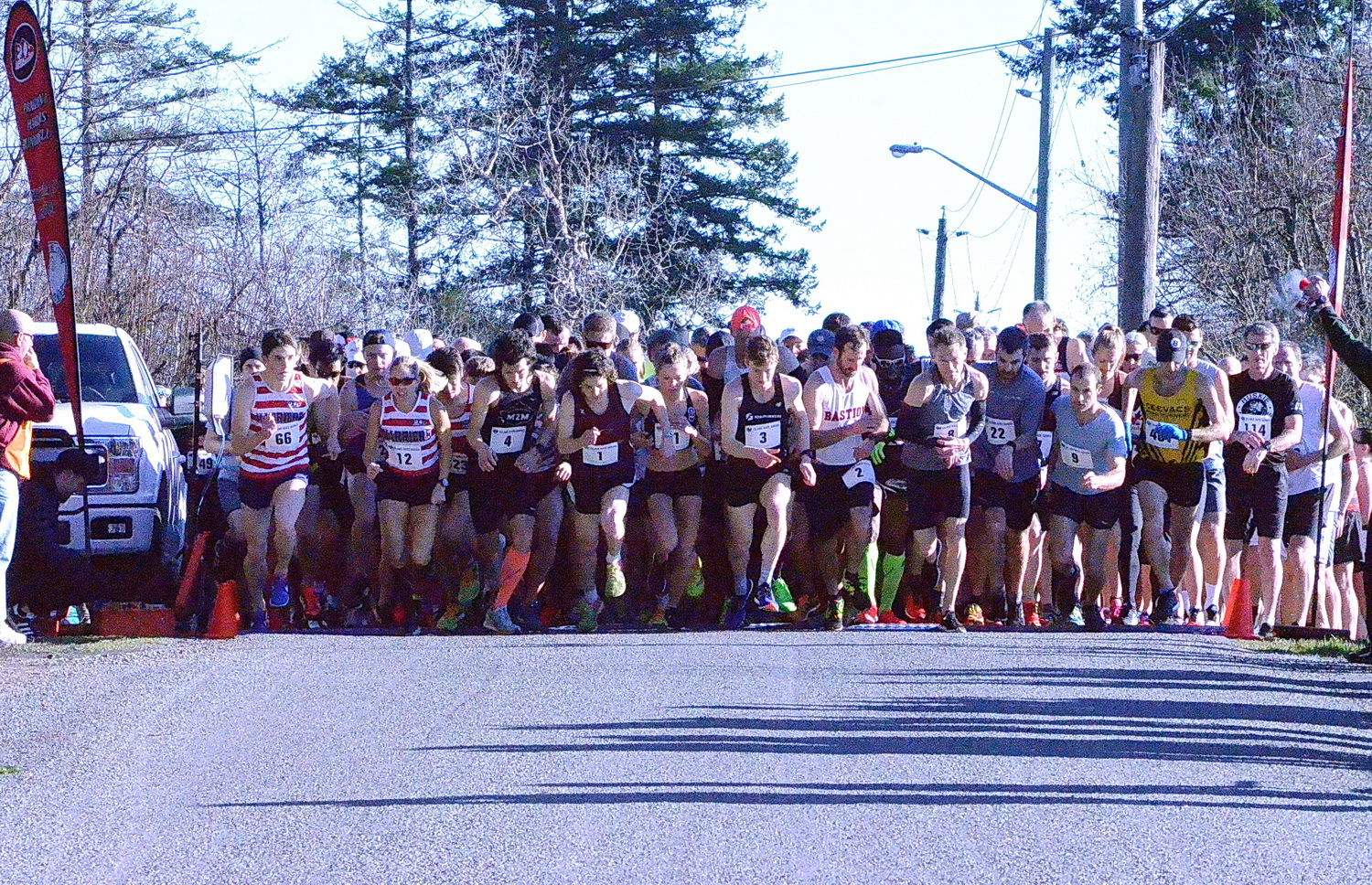 Sunday, in North Saanich, at the 40th Pioneer 8K, the day could have been described as a bluebird kind of day. In 2018, at the same race, it may have been characterized as a horrendous dystopian nightmare of hale and wind; what a difference a day makes.

For 546 runners and walkers, conditions could not have been more ideal for an early January date for the first race of the BC Super Series as well as the Vancouver Island Race Series.

In the men’s race, it was guaranteed that we would see a new winner as Vancouver’s Luc Bruchet, defending champ, took to the indoor tracks south of the border instead.

For the first Pioneer 8K win of his career, Anthony Tomsich won in the time of 24:44.

Asked about his performance in comparison to his expectations, Tomsich said, “It was good. I spent a lot of the winter putting in some base mileage and getting some workouts in, but nothing too specific. So it was nice to come out and enjoy the beautiful weather that we had today.”

Tomsich is originally from Fairbanks, Alaska and attended the University of Western Washington before settling in Vancouver as a coach and athlete with the Miles2Marathon run club.

Tomsich is hoping to run faster than the US Olympic Trials time of 2:19 in the marathon. He has run 2:26 twice (2:26:21 pb). He hopes to race both the Eugene Marathon in April and the uber-fast California International Marathon in December. In his M2M club are two former international marathon runners Rob Watson (2:13:29, 2:13:37)) and Dylan Wykes (2:10:47) as well as current marathon runner Rachel Cliff, who ran in the Berlin Marathon in September with the fastest Canadian debut all-time at 2:28:53.

Last year’s second-place finisher Matt Noseworthy, who is a University of Victoria Vikes athlete, finished fourth this year in the time of 25:32, just 32 seconds up on Vancouver’s Natasha Wodak, who won for her sixth time on Sunday.

Wodak holds the national record in the 8K distance at 25:28, which she set at the 2013 edition of the Pioneer 8K, which was run on a different course.

“It was good. The previous two years I ran around 26:37. I did the same thing last year (ran Pioneer, then Houston Half Marathon) and ran 1:11:31 in Houston. So running a little faster here, I hope to run a little faster in Houston too.”

She ran the New York Half Marathon in 2015 in the time of 1:11:20, which represents her personal best at the distance.

Cliff had a big year in 2018 with that fast debut in the marathon as well as setting the national record in the half-marathon distance at 1:10:08 from The Woodlands Half Marathon in The Woodlands, TX.

Cliff will run another marathon in 2019, but has not decided between a spring race or a fall one. If she chooses a fall marathon, then it is likely she will try to improve upon her own 10,000-metre best at the Payton Jordan Invitational in May. She has run as fast as 31:56.86 from Payton Jordan in 2018.

“We (Wodak and Cliff) worked together a lot. I think she was helpful to pull me along and I think I pushed her a bit too, so we both ran pretty fast,” said Cliff.

Wodak – who owns the national record at 31:41.59 – also plans to race Payton Jordan, after a stint at altitude in Flagstaff, AZ. On March 31, she will be racing the IAAF World Cross Country Championships that are taking place in Aarhus, Denmark.

The third female was closely followed in by the fourth and fifth finisher, leading a group of 40-plus athletes. They seemed to have their own masters competition going.  Marilyn Arsenault, competing in the 50-54 age-category, finished 35th overall in the time of exactly 29:00 to win the masters. Nine seconds back was Catrin Jones and a further 23 seconds behind her was Jen Millar. All three are from Victoria, meanwhile, Vancouver’s Katherine Moore, also in the masters age group, finished one second back of Millar.

The top three masters men were James Richardson who finished eighth overall in the time of 26:18. Victoria’s Craig Odermatt, competing in the 45-49 category probably looked at the start line thinking of third place, with his coach Jim Finlayson toeing-the-line, unfortunately, Finlayson was unable to finish the race, so Odermatt took second and 16th overall in the time of 26:56. Fellow Prairie Inn Harrier Shane Ruljancich clocked a 27:34 as third master.

In the boys junior category, there was a race to be had. Gabe Van Hezewijk finished 10th overall in the time of 26:31, just three seconds up on Jack Boden. Not too far back was 800-metre specialist Michael Barber in the time of 27:12. The latter two athletes are training with the host club’s junior program Prairie Inn Harrier’s Running Club Youth Team under two-time Olympian Bruce Deacon who could be seen on the sidelines cheering on his athletes.