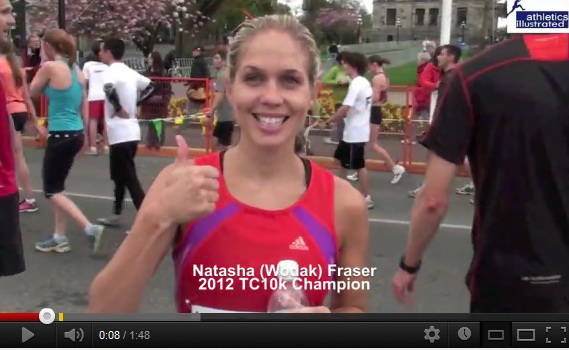 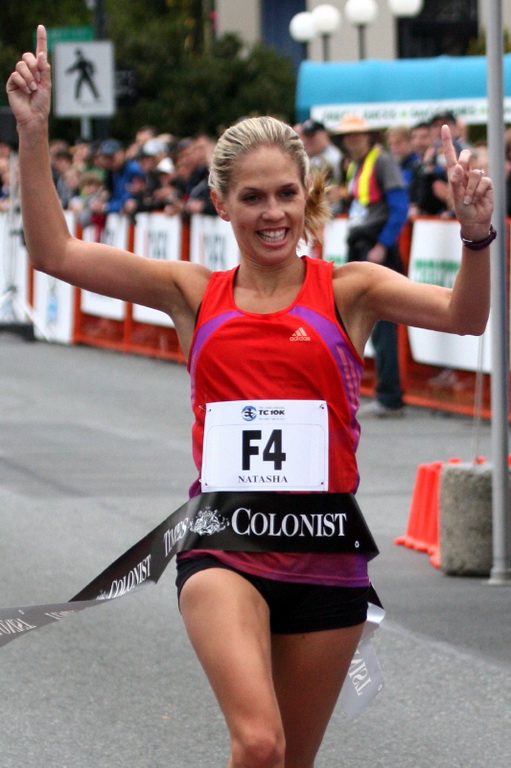 Natasha Wodak of Port Moody, British Columbia is preparing to compete in her favourite running discipline, cross-country. She plans to race in the Canadian Cross Country Championships that take place at Jericho Beach near downtown Vancouver on Saturday, November 24th.

On Sept. 1st Wodak ran a new 10,000m personal best at the BC 10,000m Championships in Victoria, BC. She finished first in thirty-three minutes and forty-four seconds. Wodak has won the 50,000-competitor strong Vancouver Sun Run in under 34 minutes. She also won the Victoria TC10k which typically takes place one week after the Sun Run.

She competed in the NAIA for Simon Fraser University. Wodak suffered burnout and after taking a break from competition came back refreshed with a new level of enthusiasm.

Christopher Kelsall: Did you grow up in Port Moody?

Natasha Wodak: I grew up in Surrey. I moved to Port Moody four years ago.

CK: How did you come to discover running?

NW: I have been running since elementary school. My dad took me to a 5k fun run when I was 12, and I’ve been hooked since! I competed throughout high school, and then at University (SFU). After I graduated in 2006, I was totally burnt out and decided to take some time off. When I moved to Port Moody, I decided to start training with my old group again. I had a renewed passion for the sport and immediately started improving. I continue to love running more and more!

CK: Were you burnt out from too much racing?

NW: Yes. I had been competing in track and field and cross-country every season throughout high school and university. I was at the point where I didn’t love it anymore, and it showed in my lack of quality races. I needed a break from running, to just live life and not worry about getting up for a workout or a run every morning.

CK: How long was the break?

NW: The break was about three years.

CK: Did you do any running in that time?

NW: I continued to run about three or four times a week, or whenever I felt like it. Basically, I did just enough to keep fit. I even did a few road races for fun.

CK: How did the championships race play out. Can you take me through it?

NW: I went out pretty conservative. Marilyn (Arsenault) and I had chatted before the race and decided to try to work together for the first half of the race. So for the first eight laps, she would lead two laps and then I would take the next two. It was a bit windy, so this was definitely helpful. Marilyn fell off the pace (81 sec per lap) after the eight laps, and I just tried to stay relaxed and smooth. I went through the 5k at about 16:54, a little slower than I wanted, but I still felt really strong and smooth. I managed to keep the next 10 laps all at 81’s, and then kicked it in for my last lap which was around 77 seconds. So my second 5k was 16:50, faster than the first half! I am super happy with the race, and my new personal best.

CK: Have you changed your training recently, to achieve this new standard?

NW: Not really. I’ve just had a really consistent year of training. I haven’t had to take time off for injury or sickness; I’ve been lucky.  All of the hard work I put in during the winter and spring is starting to pay off now.

CK: What does “all the hard work” look like, for example, what does your typical training week look like?

NW: Basically just training every day throughout those cold, rainy winter months. Getting up every day and putting in the work. Skipping brunch with friends and weekend getaways for my running; making running my first priority.

A “typical” training week for me varies, depending on my race schedule (as I am sure it does for most runners). I never run more than 120 kms-per-week. I do interval-type training three days a week, two days of easy running, one long run, and one rest day. I also do two to three sessions at the gym (weights, plyos, core stuff).

CK: What effort level do you run the three weekly interval sessions at?

NW: It depends on the type of workout I’m doing, but usually it’s a pretty good effort. In a typical cross-country type workout, I’ll do three or four times 2k with a three-minute recovery between each. I’m running each interval at race pace (6k-10k effort). On Saturdays, I tend to do some more tempo-like workouts.

CK: Do you plan to grow the volume at any time?

NW: I work about 25-30 hours a week at a busy restaurant. If I try to run twice a day and then work a seven or eight-hour shift on my feet all night, I’m freakin’ exhausted. It’s just too much. If I cut back my hours at work, I’m sure I would be able to handle more mileage.

CK: For quality training, have you ever chased a dine and dasher?

CK: You seem to compete in a range of distances, from 1500m to the half-marathon. Are you planning to settle on a distance and specialize?

NW: (laughing) I was just talking to my coach about this yesterday! I want to do it all, but realize that it’s probably best to specialize a bit. This fall I am concentrating on 10k and half-marathon distances. I will still do some cross-country races (BC Champs and National Cross), but my training will be more specific for 10k and half-marathon. In November I might do some faster stuff to get ready for cross nationals. Kinda sounds like I’m still doing it all doesn’t it! lol!

CK: So does that change the look of the week? Less on the intervals and more on tempo-type runs?

NW: I will do more tempo-type runs when training for the longer stuff. But I still do a lot of interval training for half-marathon and 10k training, I just do more sets!

CK: National Cross Country Championships at Jericho Beach — a great venue, is there much of a local cross scene in Greater Vancouver?