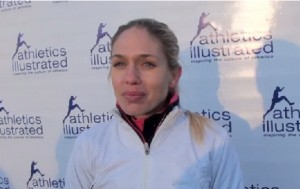 Vancouver’s Natasha Wodak is used to waiting. Recently she waited patiently for  a foot injury to clear. It was diagnosed on January 29th as a stress fracture. Her first workout was April 10th. From there she quickly got herself into shape in an effort to save her Rio Olympic team selection status.

On May 20th, Wodak competed in the Hoka One One Middle Distance Track Classic that takes place at Occidental College in Los Angeles. She was there to prove Olympic readiness by contesting the 5,000-metre event; half the distance of her specialty. Wodak needed to prove fitness demonstrating to Athletics Canada that she has fully recovered from injury and is in shape to compete in the 2016 Rio Olympic Games, which starts on August 5th – the athletics program starts one week later on the 12th, just 80 days away.

She was slightly nervous, “I was very nervous for the 5k – had no idea where my fitness was,” shared the 34-year-old.

Wodak initially announced her arrival as a potential Olympian in May of 2015, where she competed in the Payton Jordan Invitational that takes place at Stanford University in Palo Alto. She raced the 10,000-metre event not only finishing under the Canadian Rio Olympic standard of 32:15 (32:00 at the time); she also broke the Canadian record with her 31:41.59 performance.

The record was previously held by Courtenay Babcock from the 2003 Payton Jordan meet, where she ran to a 31:44.74 clocking.

Wodak suffered an injury that lasted for part of 2015 and into early 2016, so was unable to train fully or race. Once injury-free in early 2016, the chase was on; to again run fast enough to qualify for the Olympics, she did. Wodak finished the Hoka One One 5,000-metre race in the time of 15:37.70 – apparently fast enough for the governing body. The actual 5,000-metre qualification standard is 15:24.00.

When asked what it meant to her to successfully prove fitness, she told Athletics Illustrated, “It is a huge relief- and a big confidence builder! I’m excited to see how much faster I can run with a few more months of training!”

Athletics Canada has not yet announced if Wodak is officially on the team. That information will be made public on July 11th, the day after the Canadian Olympic Trials that are taking place in TrackTown Canada (Edmonton). Although she does not have to race in the meet, she still has to wait, something she is used to doing.