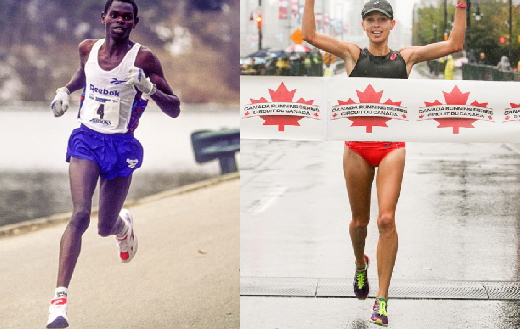 Over its four-decade history the Race Roster Spring Run Off 8km has seen world champions and record holders dueling with the nation’s best in a race which traditionally kicks off the racing season.

This year marks the 40th running of the prestigious event – the second with Race Roster as title sponsor – and Canadian Olympian Natasha Wodak is making her debut (Saturday April 8th).

Most athletes turn up here to Toronto’s High Park wondering what kind of shape they have managed after the winter. Though she always delivers a stellar performance on the roads she too is approaching the race cautiously.

“I haven’t raced since September,” the 35 year-old admits. “I was looking for something a little less than a 10k and this race is part of the Canada Running Series. I like all of (race director) Alan Brookes’ events and I thought it would be a good start to my season. It’s something I have never done before and I always like going to Toronto.

“I had surgery on my right toe on December 23rd. I have really bad arthritis in my toe joints and it ended up fracturing the toe. There was a piece of bone fragment that had to be removed and then they shaved down the bone spur to increase the mobility in the toe joint.”

She believes that the toe issue lay at the cause of several injuries the past few years including plantar fasciitis and a couple of stress fractures. These prevented her from a lengthy block of uninterrupted training which begs the question: what could she accomplish fully fit?

Now, well recovered, Wodak has slowly increased her mileage with a berth at the 2017 IAAF World Championships in London remaining the year’s top priority. She qualified with her performance in the Rio Olympics (31:53.14).

“I just want to get in a race, a hard effort under my belt, to start this season,” she says of the Race Roster Spring Run Off.  “I was going to open at (her hometown) the Vancouver Sun Run but I really want to do well at the Sun Run so I thought I need one race before it. I thought this is perfect, a race I haven’t done before.”

The reputation of the Race Roster Spring Run Off is well known to Wodak. The women’s outstanding course record of 25:50 was set in 1990 by Britain’s Jill Hunter (now Boltz) while the men’s record is held by Daniel Komen of Kenya, an equally remarkable 22:35.  Such is the calibre of some of these champions that three years later Komen was both world 5000m champion and world 5000m record holder.

The race was founded in 1978 as a means for RMP, the Canadian distributor of Brooks Shoes, to promote the brand while putting something back into the sport. Mike Dyon, himself a former national marathon champion, remembers the race’s inauguration well. As one of the principals of RMP Athletic Locker – along with his father Robert and brother Paul – he founded the race with the help of his club, Etobicoke Striders.

Dyon says they were pleased with how quickly the race grew into one of the biggest local races reaching 1,000 plus entries within the first few years. Held inside the park it affords spectators many opportunities to see the race. He also fondly remembers his late father’s idea of giving out maple syrup to the top ten finishers. This has become a race tradition.

“He also came also up with the idea of having a bagpiper pipe everybody down to the starting area,” Dyon adds.

In 1981 the race became the first in Canada to offer prize money helping turn the tide towards professionalism.

Former Canadian 1,500m record holder, Dave Reid, a club mate of the Dyon brothers, has attended and volunteered at all but one of the races. The athletic performances of the superstars like Komen, the US’s  Ed Eyestone, and 1995 world 10000m champion Sally Barsosio, are well etched on his mind.

In 1994 Barsosio, he remembers, had to be coaxed out of the Grenadier Restaurant where she was sheltering from the bitter cold. Even though she missed the start she went on to win the race. Three years later she was crowned world 10000m champion.  But his personal highlight was the 2003 edition held in the aftermath of a devastating ice storm.

“I get up Saturday morning, ice everywhere, and get to the park at 4:00 a.m.,” Reid remembers. “The main maintenance guy had actually pulled two massive plows and salters off the main streets. They were working like mad all throughout the night, right up till the 10:00 a.m. race time.

“At 8:00 a.m. the police wanted to cancel the event and I told them that it would be safe by race time. The workers salted and plowed the two huge hills about ten times and sure enough the race went off. I still can’t believe we pulled it off or that 1,400 runners showed up.”

That infamous Spring Hill Road has seen many a fine runner humbled. Organizers have capitalized on this with a ‘Kill the Hill Challenge’ whereby runners can compare their times up the 365 metre long climb. The prize, naturally, is a bottle of maple syrup.

This year, following the race all participants and their families and friends can head over to Henderson Brewing Company for a complimentary beer. The brewery is also providing a Grand Prize to the top fundraising team at the Race Roster Spring Run Off.

Another addition to the event is a free training run led by 2016 Canadian Olympian Genevieve Lalonde and Tribe Fitness this Saturday morning, March 18th.

And so Wodak is stepping into a race with illustrious history and charm relishing the opportunity. Like all Olympians she has extraordinary ambition for the upcoming year.

“Obviously the World Championships this summer,” she explains. “I already have the qualifying time. So that is awesome.  I would like to get fully healthy and run a fast 10k and hopefully a fall marathon.”

The Race Roster Spring Run Off will give her an indication of her progress towards these goals.