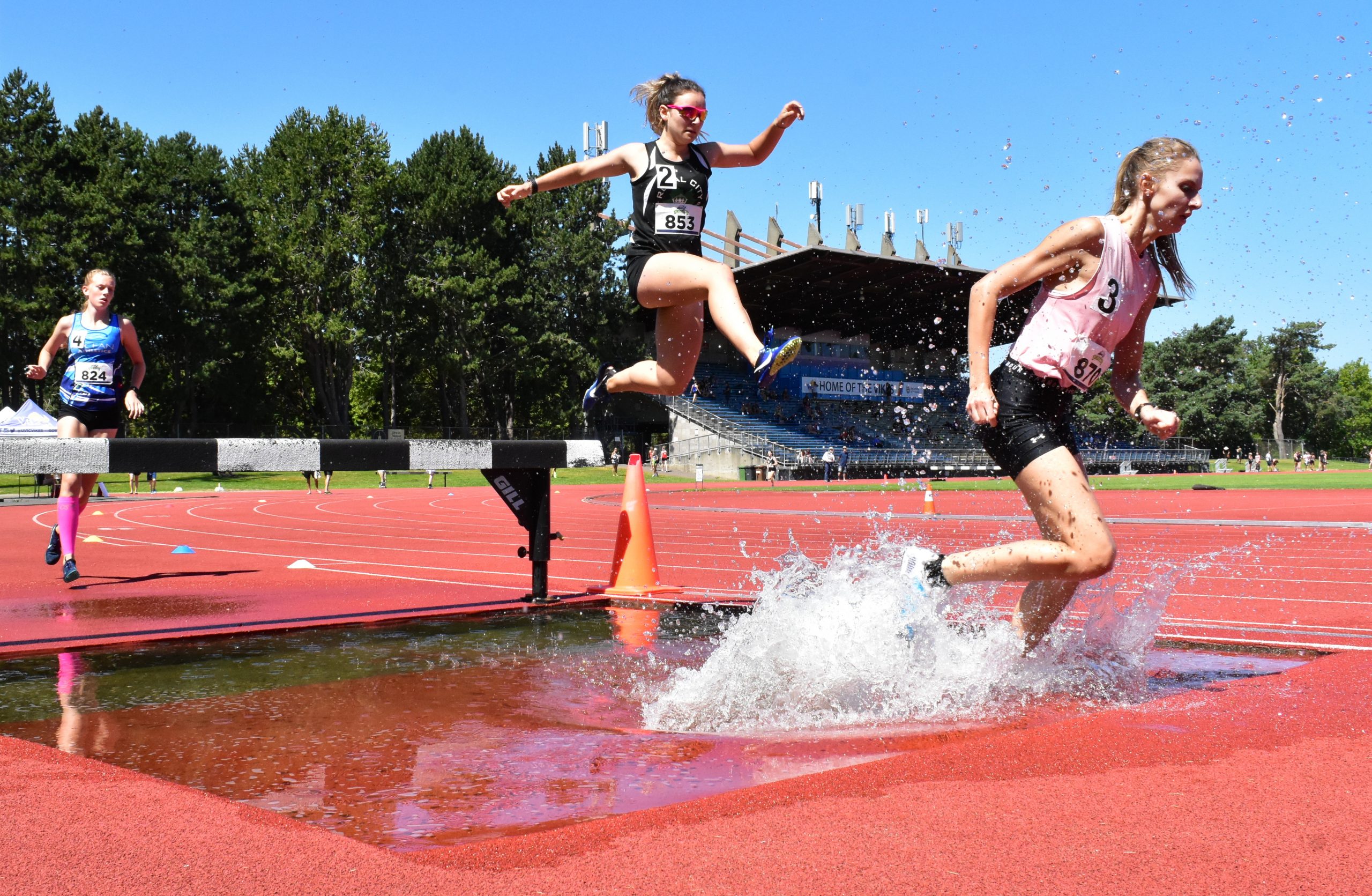 Countless personal bests and a few national records were set at the 2021 BC Endurance Challenge meet that took place July 24th and 25th at the University of Victoria.

The two-day meet at Centennial Stadium was one of four simultaneous athletics events taking place throughout the province of British Columbia. There was a throws-specific competition in Kamloops, combined events in Kelowna, and sprints and jumps and wheelchair competitions in Langley (Vancouver).

The highlight of the Victoria meet may have been two distance medley relay races. Teammates, standing on the track, readying themselves for their turns at receiving the baton cheered their teams on with great excitement — it’s a team event after all. At least two national records are now pending from the women’s race.

The Vancouver Thunderbirds, anchored by former UBC Thunderbird Devan Wiebe running the 1600m portion capped a great team effort to take the national record for the 4000m-long race. The first runner was to go 1200m, followed by a 400, 800, and then 1600m (nine metres shy of the mile, but four even laps).

“Shout out to our coach CJ, he’s the best,” said Wiebe after the race. She was referring to Chris Johnson who has two athletes in Tokyo ready to compete in the Olympic Games, they are John Gay who will be racing the 3000m steeplechase and Natalia Hawthorn in the 5000m.

“We are very excited to accomplish this. We felt we could do it going in and we are very happy with the result,” said Sophie Dodd. who also finished fourth in the women’s mixed 800m on Saturday with a 2:09.68 performance. In the DMR, she opened with the 1200m leg.

The four finished in the time of 11:46.64. The previous national record was 12:17.12. The record was set in Windsor, Ontario in 2009 by Melissa Bishop-Nriagu, Christiane Lela, Julia Tousaw, and Tiffany Locke. Bishop-Nriagu is the Canadian record holder in the 800m event with her 1:57.01 personal best. She is a three-time Olympian and is competing in Tokyo.

The other two teammates on Sunday were Honor Walmsley and Tamara Harris.

Finishing in second place was the Prairie Inn Harriers Racing Team. They clocked a 12:05.42 performance which is a pending U23 national record. Finishing in third place was the second Vancouver Thunderbirds team in the time of 12:46.06. The open record of 12:17.12 also happened to be the national U23 record.

It was Alexi Dow, Clara Chudley, Ellla Ballard, and Angelina Shandro who earned the U23 record for the Harriers.

Matti Erickson of Nelson, BC, a small town nestled in amongst the Kootenay Mountains within the Canadian Rockies is better known for its fabulous downhill skiing than running. However, Nelson is also home to a fledgling club named the Kootenay Chaos. Eighteen-year-old Erickson bided his time for approximately 500m before letting loose and passing Charlie Dannatt and Christian Gravel, who led from the gun. Gravel temporarily took his lead back, only to be passed again on the finishing straight. Gravel paid for that early lead as Erickson finished with a commanding sprint in the time of 1:50.11, which puts him under the U20 World Athletics Championships standard of 1:50.80. He will be running for the University of Oregon next season.

“The goal in the race today was just to run a personal best,” said Erickson. “…I came through the 400m split in bang on 54….and I knew that I was in a good position. I could have made an earlier move. I pulled that classic Centrowitz move, getting on the leader’s right shoulder with 200m to go and just kicking for the finish. I felt I could have gone a little faster, but it was a good race for me.”

In unusual fashion, several athletes led their respective races from gun to tape. This included Chilliwack’s, Christina Peet Williams. The 17-year-old took the U18 women’s 1500m race in the time of 4:43.21. Not quite a personal best, but that’s tough to do leading all the way.

Victoria’s Michael Barber bolted from the start line with the look of determination and from gun to the tape he led with authority, running a new personal best time of 1:55.28.

“I have never led a race the whole way before,” she joked, knowing she probably could have run a new personal best on another day.

Caiden Lee of Ocean Athletics Track and Field Club in Surrey led his 3000m race from beginning to end. He clocked an 8:33.44 time. The effort and the 29-degree temperatures may have contributed to his appearance of intense effort, the entire time. Tion McLeish with the Victoria Speed Project finished in the time of 8:46.81. He ran alone the whole way, a dozen seconds behind Lee, and he had roughly the same gap behind him. Issac Baker led the big chase pack the entire way and finished third for his efforts, clocking a 9:00.46 for bronze.

UBC Thunderbird Alum and Calgary, Alberta native Maria Bernard-Galea was yet another athlete who led wire-to-wire clocking a 3000m time of 9:20.02. She is a 3000m steeplechase specialist and competed for Canada at the 2016 Rio Olympic Games. Her personal best in the steeplechase is 9:36.12 from 2019.

Honor Walmsley finished second in the time of 9:45.20, while Sandra Kilmartin took third in 9:47.60. Randomly, the top three all happen to be 28 years of age. The Thunderbirds placed four consecutive athletes from 2nd to 5th.

Coastal Track Club dominated the men’s DMR with their A and C teams finishing 1-2 in the time of 10:42.61 and 10:44.24, respectively. In third was Ocean Athletics making for a competitive finish with their clocking of 10:50.63.

The mixed 5000m racewalk event featured one of Canada’s top young walkers in 18-year-old Olivia Lundman from Nanaimo Track and Field Club. She led for much of the race and won the women’s division, however, 48-year-old Dimitry Babenko with Greyhounds Masters took over with just a couple of laps remaining. The two finished in the time of 24:15.49 and 24:29.66, respectively. Katelynn Ramage finished third overall — and held that position the entire way — finishing in 26:07:04.

There were several steeple races. The men’s 2000m U18 steeplechase featured just one runner in Mateo Moore out of Nanaimo. His clubmate Alycia Butterworth is competing in Tokyo at the Olympic Games in the 3000m steeplechase along with two other British Columbians in Genevieve Lalonde of Victoria and Regan Yee of Langley, BC. Yee is the current national record holder, she improved on Lalonde’s record this summer running a 9:27.54 on June 29 at the Canadian Olympic Trials in Montreal.