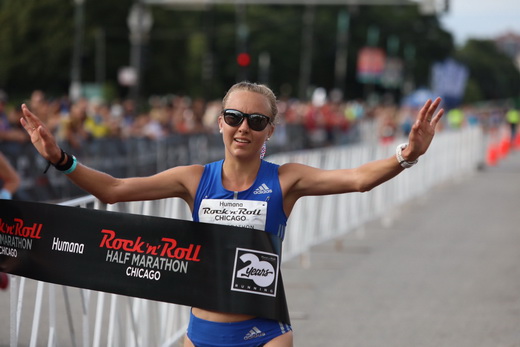 Defending champion Neely Spence Gracey returned to the Humana Rock ‘n’ Roll Chicago Half Marathon reclaiming her title in 1:13:13 and finishing in 6th place overall. She finished more than four minutes ahead of the next woman Julia Kohnen who crossed in 1:17:37. Jamie Vest took third in 1:17 37.

“It’s always exciting to get the win,” said Spence Gracey, who finished in the top 10 at both the Boston and New York City Marathon last year. “I love this race and it didn’t disappoint this year. I’m really happy it was a good start to my fall season. I love the energy here. It’s a great course. I like coming to Chicago and running along the water, finishing at the fountain. It’s just really iconic. Rock ‘n’ Roll does it right. It’s a big party!”

The men’s race was much closer with Tyler Pence of Springfield, Illi. passing up Scott Dahlburg with about four miles to go to take the lead and eventually the win. Pence finished first in 1:09:06 but Dahlburg was not far behind taking second place in 1:10:21. Finishing off the podium was Gedion Yetrif in 1:12:25.

“It was my 4th time doing this race and it’s a great crowd every time,” said Pence. “The first five miles were my favorite. They’re in the city and it was easy to relax in the beginning. This was my 6th half and every single one I’ve gone from the gun and that just hurts. This time I wanted to start calmer.”

Women’s running pioneer, Kathrine Switzer, was on hand to cheer on runners as they finished after finishing the 5K on Saturday. Switzer became the first woman to complete the Boston Marathon starting the fight to overcome gender stereotypes. Her foundation, 261 Fearless – named after the original bib number she ran with — supports women in the sport of running and is one of the featured charities of the weekend. Through her partnership with Humana, the 70-year-old is now focused on inspiring seniors to achieve their best health and experience all life has to offer.

“One of the reasons I’m involved with Humana and Rock ‘n’ Roll [Marathon Series] is that if we can show older runners that our sport can be engaging, social, and fun, we can keep them at it,” Switzer said. “I’m trying to be a good example.”

Switzer met Spence Gracey at the finish line to congratulate the champion:

“When [Kathrine] comes up and she says, ‘Your story’s so amazing, I’m inspired by you,’ I started to tear up,” said Spence Gracey. “She’s so iconic in the sport, and it’s so impressive that she even knows who I am. I actually got her autograph, I’m such a little fan girl.”