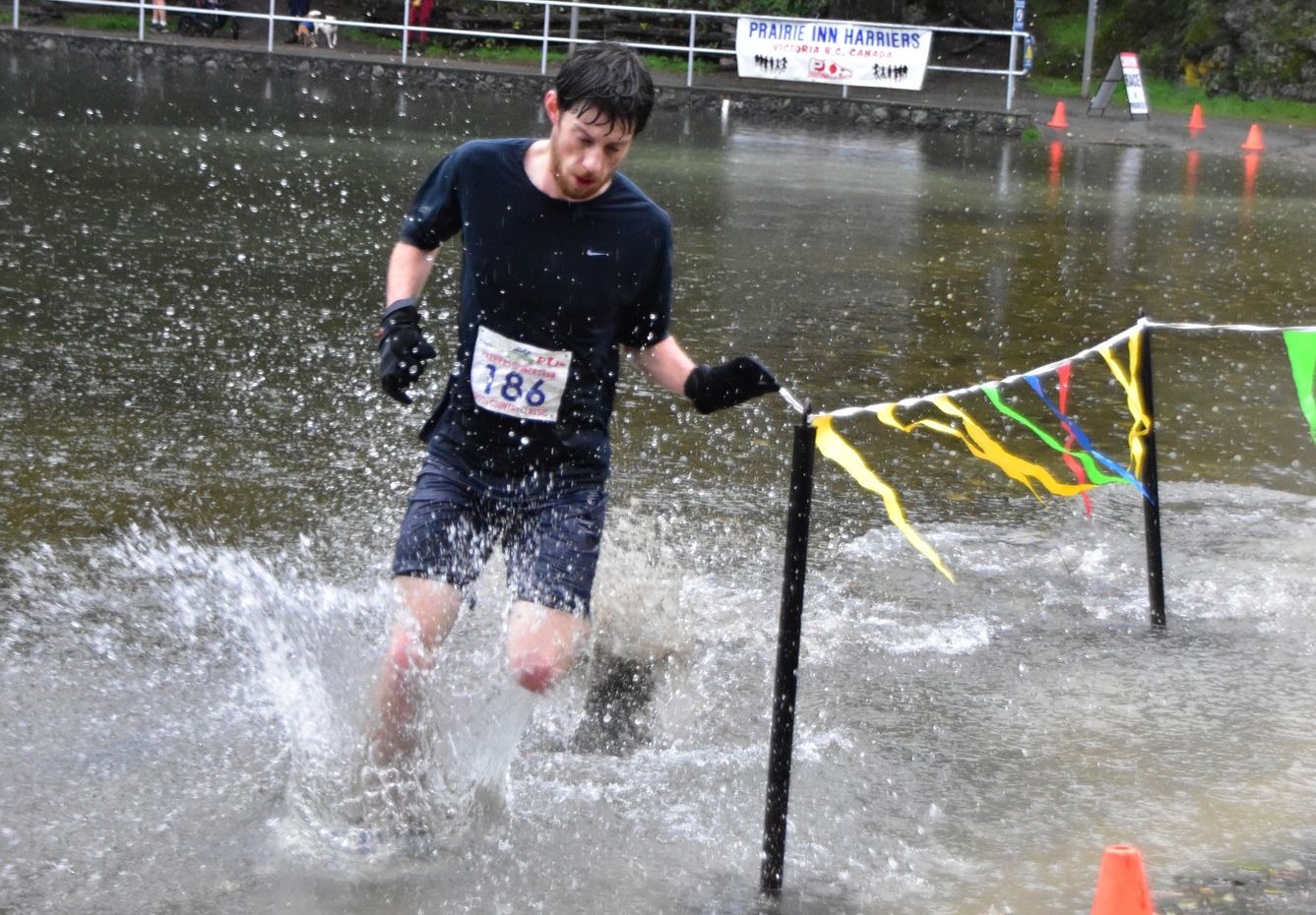 The 37th annual Gunner Shaw 10K Cross Country Classic at Thetis Lake Park in Victoria, BC lived up to its name on Saturday. The so-called atmospheric rivers (weather systems) that have dumped massive amounts of rain on the west coast continued while the race was on.

The iconic trail race named after the legendary local runner Bruce “Gunner” Shaw is known for offering unrelenting steep hills both up and down, exposed tree roots, rocks (lying in wait), and nearly swimmable puddles. There is a series of water features of up to 150m in length and waist-deep. Finishing into the lake — thigh deep — after a 500m stretch of a steep roller coaster-like run of hills (of all things), brought smiles to the faces of many finishers. They were smiling because they recognised that only someone with a morbid sense of humour had created the route.

Good day to race through #Thetis – some really big puddles in the forest #GunnerShaw #Harriers pic.twitter.com/CJb7mkXAOz

Defending champion Aaron Holmgren from the Peninsula Track and Field Club was off to Ottawa to challenge for the masters title at the Canadian Cross Country Championships. He won the title over the four-lap, 8K course in the nation’s capital. So did long-time Victoria masters runner Jen Millar. It was a good day for the island running community as Genevieve Lalonde and Ruby Broadbent also won in their respective races.

A run of five masters finished in the positions of fifth through 10th including two-time former winner Shane Ruljancich of the Prairie Inn Harriers — the host club. Although it was Matt McCrank who won the masters division in the time of 36:53.84.

Sarah Burger won the women’s race in the time of 42:13.18. Hannah Stoddart took second in 42:57.33 and three-time winner (’07, ’08 and ’17) Lucy Smith finished third in the time of 43:19:56. Not bad for a 50-something kettle-bell-swinging retired runner. Smith is a 19-time Canadian champion on the roads, tracks, trails, in duathlon, triathlon and ironman. She is also the current CEO of Triathlon Canada. She finished 35th. Finishing 36th was brother Dan Smith in the time of 43:20.83. Also in the race was Lori (Bowden) Chestnut, a two-time world ironman champion as was Canadian international open water swimmer Eric Hedlin in his first ever running race — he chose an appropriate event to get his start.

The first 60-plus athlete (64) was Gary Duncan who placed 44th overall. At one point in the race, he was sliding backwards in the mud, grabbed onto a tree, and so much was the ground saturated that he pulled the tree out from the roots. To date, no protests have been lodged.

More than 360 competitors registered and 311 started and finished the race. The Gunner Shaw 10K Cross Country Classic is one of two named after Shaw. On Dec. 4 in Vancouver the Lions Gate Road Runners host the Gunner Shaw Memorial Cross Country 10K at Jericho Beach. The 2021 edition will be the 50th.

The Victoria edition is the second of three trail races to take place at Thetis Lake during a three week span. The first is the Thetis Lake Relays, and the third is the Stewart Mountain 5/10-mile on Dec. 5.