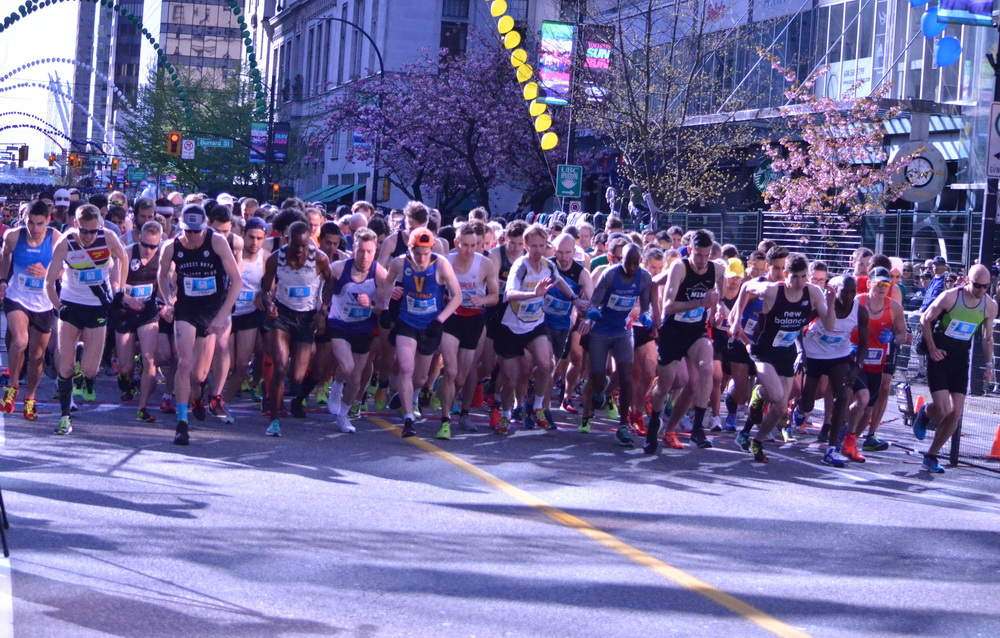 A spring-like bluebird Sunday beckoned over 30,000 runners and walkers to the streets of Vancouver on Sunday for the 34th annual Vancouver Sun Run, one of the largest 10K races in North America. Perfect conditions prevailed, while newly crowned winners enjoyed the fast, but rolling course.

American Brendan Gregg representing the elite Hanson’s Running won the race in the time of 29:15, while Kenyan Monicah Ngige took her first Sun Run title, crossing the finish line in the time of 32:25.

“I am happy with the race,” said Gregg. “It’s a great event and this sets me up well for the Payton Jordan Invitational in two weeks.”

Gregg, from California, competed for Stanford and immediately joined Hanson’s Running upon graduation. The high-performance group is based in Michigan, however, he has moved back to California. The 2:18 marathon runner will be looking to improve his performance at the California International Marathon in December. For now, he has some shorter distance races to tackle. Payton Jordan is typically a fast meet and he will be looking for a new personal best.

Second overall was Vancouver’s Geoffrey Martinson, who finished in 29:36, while third position was grabbed by Matthew Travaglini of Calgary; he crossed the line in 29:50.

“I am pretty happy with the result,” said Martinson. “I am hoping to run faster coming up in some meets in the US.”

It was Ngige’s first race on the west coast. The Kenyan has raced in New York and will return to New York next week for another road 10K, the same one she set her 31:55 personal best at last year. As for the Sun Run, she hopes to defend her title next year.

“Yes, if I have the opportunity to come back next year, I would like to defend my title,” said the 25-year-old.

“I found the course fast, but there were some rolling hills and there is that hill to the bridge at 5K which is tough, but I like course and event,” said Ngige.

Ngige knew who here competition was naming of Rachel…Natasha…Emma….Dayna (Pidhoresky).

American Emma Bates finished second. The Boise, ID alumn of Boise State University finished in the time of 32:36 – a new personal best time. It was an improvement of 1:10.

The third-place finisher was Vancouver’s Rachel Cliff who landed Monday from Australia, where she competed in the 2018 Gold Coast Commonwealth Games 10,000-metre, finishing ninth. Sunday she was the first Canadian across the line.

“I just started to feel recovered from the racing and travel the last couple of days,” said Cliff. Her and fourth-place finisher Natasha Wodak have raced for years together including the Commonwealth Games, where Wodak had a career race finishing fifth, just 1.5 seconds from a bronze medal and with a second-fastest ever 10,000-metre performance behind her own national record of 31:41.59.

“I put so much into the Commonwealth Games race. I invested so much emotion and mental energy, even though I love the Sun Run, I left it all out there and it was difficult after a couple weeks of just jogging to have that edge, but I am happy and I am happy Rachel ran so well today,” said Wodak.

Cliff is also looking for a new personal best at Payton Jordan.

“I want to get below that 32-minute barrier.” She ran 32:00.03 at the 2017 London IAAF World Track and Field Championships. “Commonwealths were my second major games like that. The first one was worlds. I feel like I am on the wrong side of 32, so I hope to get below that at Payton Jordan.”

Top-ranked, Yves Sikubwabo dropped out at the 5K mark on the Burrard Street Bridge, which has a sharp hill to the deck from the road. “My calf muscles just cramped right up, so I couldn’t continue,” said the 2017 U Sport Cross Country Champion.

The top men’s masters finisher was Paradise, NFLD’s Colin Fewer, who crossed the finish line in the time of 30:59. He was followed in by David Morrissey (32:20) and Jeremiah Ziak (32:25), both of Vancouver.

Lyndsay Tessier won the women’s 40-plus event. The Torontonian finished in the time of 34:47. Second was local Catherine Watkins in 35:06 and Christy Lovig of Kelowna clocking a 36:07 for third.

About the Vancouver Sun Run