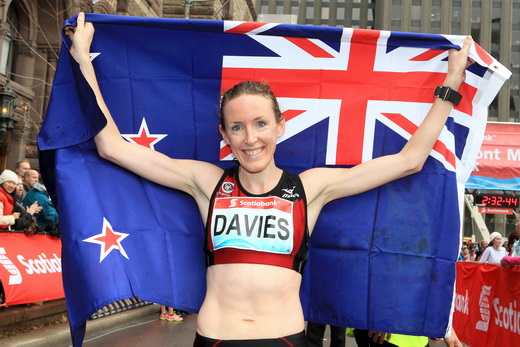 Three years ago Mary Davies’ victory at the Scotiabank Toronto Waterfront Marathon wasn’t so much a surprise as a shock to the thousands lining the streets expecting another East African to reach the finish line first.

But the New Zealander’s persistence paid off as she earned both $20,000 prize money and a personal best time of 2:28:57.

“I remember it being very surreal,” she says from her home in Houston, Texas. “I think it took like a week to realize I had won it. It was just an amazing experience.

“I passed (Kenya’s Agnes) Kiprop around 41 k and really wasn’t sure, I couldn’t really believe I was passing her, and then with 800 metres to go I looked around and there was no one there.”

The Kenyan had run a personal best 2:23:54 a year earlier and was favoured to win. But after going out hard she had nothing left in the final few kilometres and Davies could see her struggling.

Davies remembers being overjoyed that day but there was little time to celebrate. She and her husband Gabriel Sawakuchi, together with their infant son, Lucas, caught a train back to Ottawa a few hours later. Sawakuchi was a physics lecturer at Carleton University at the time.

Now at the age of 33, and having given birth to a baby girl fifteen months ago, Davies is returning to Toronto to attempt the qualifying standard for the Rio Olympics in this IAAF Gold Label race.

“Our Olympic ‘A’ standard for the Rio is 2:27 and the ‘B’ is 2:29 so definitely I am after 2:29 in Toronto,” she says, “and we will see how the day is and what the pacers are doing and go from there. But definitely the 2:29 is the preferred goal and then anything after that.

“Training is good. In terms of the quality and I am feeling similar to how I was before Toronto in 2012.”

A little over two years ago Davies and her family moved to Houston where Gabriel is a medical physicist at the University of Texas MD Anderson Cancer Centre. The couple had met while studying at Oklahoma State University. Davies had been recruited to the NCAA institution to run and in her final year she made news by winning a unique triple at the Big 12 conference – 5000m, 10000m and 3,000m steeplechase. She was also third in the NCAA 10,000m final.

Davies has an added incentive to get the standard for Rio. Gabriel is Brazilian. If she is successful in Toronto the family will likely be on site to lend support.

“I think they will all go,” Davies reveals. “A lot of Gabriel’s family is in Brazil and it would be pretty special if I made the team and having that goal there in the background is going to be pushing me in the training.

“I think my husband is very supportive and that helps a lot. And my mother in law, before important races, comes from Brazil and stays for two or three months. So when I am training I can leave the kids with her. So for those months I have a lot of support. And then the times when I don’t I have been kind of doing it before my husband goes to work and after work. We have found a balance that works.”

Davies runs 160 kilometres in a typical week under the guidance of Jim Bevan, head coach of the Rice University Women’s team. An occasional training partner is Becky Wade winner of the California International Marathon in 2:30:41. And she remains good friends with Canada’s Krista DuChene who stayed with her for a few weeks while training for the Rotterdam Marathon in the spring.

“She came down for a training camp before Rotterdam,” Davies reveals. “That worked out really well. She is a lovely lady and we get along very well. I was very sad to hear that she had broken a bone in her foot. But having the standard at least that is a bonus, in terms of Rio. But I know for her Toronto is a big one being on home soil and with the record there.”

For Davies representing New Zealand, her birthplace, is of paramount importance. Following her 2012 Toronto victory she was selected to run in the 2013 IAAF World Championships marathon in Moscow which was actually her second time at the World Championships. She had also run in Berlin in 2009. But the conditions on both occasions were less than ideal.

“I had been training in Houston so I really didn’t find the heat the problem (in Moscow),” she explains. “They found a cyst on my spleen. I had really bad stitch-like pains and they don’t really know if that was the cause of it. I couldn’t really breathe much during that race. It was a pretty terrible race. It was not much fun.”

It is quite likely the conditions in Toronto will be less sauna-like than Moscow, and far more conducive to running fast times. Race Director Alan Brookes has lined up pacemakers to help Davies, Canadian record holder Lanni Marchant and others such as Canadians Tarah McKay and Natasha Labeaud as they chase the 2:29:50 Olympic standard. Then they will fight not only for an Olympic place but for the podium.

Davies is asked if she sees herself beating her personal best time in Toronto.

“I think if everything is perfect – it’s hard in a marathon with the course the weather and all the different factors – if I can keep healthy and training keeps progressing as it has, then yes,” she replies.

And there is every reason to believe that should the East Africans – Kenya’s Sharon Cherop and Shure Demise of Ethiopia among them – falter during the race, Davies could be there in the latter stages. After all it wouldn’t be the first time.