The Nike Oregon Project (NOP) has been shut down by Nike. CEO Mark Parker made the announcement Thursday, Oct. 10 by a memo that was initially shared with Runner’s World Magazine.

The decision came less than two weeks after coach Alberto Salazar was suspended from coaching for four years by the United States Anti-Doping Agency (USADA).

“This situation, along with ongoing unsubstantiated assertions, is a distraction for many of the athletes and is compromising their ability to focus on their training and competition needs. I have therefore made the decision to wind down the Oregon Project,” wrote Parker.

Two of NOP’s most competitive athletes Galen Rupp and Jordan Hasay will be competing in the 2019 Chicago Marathon on Sunday.

Both athletes came out in defense of their coach who is no longer permitted to coach them and they were ordered by USADA to sever ties with the embattled coach.

Apparently, USADA wanted to achieve maximum impact of the anti-doping message as they announced the suspension during the 2019 IAAF Doha World Athletics Championships, some questioned the timing including marathon world record holder Paula Radcliffe.

Several of Salazar’s athletes were competing in Doha including Sifan Hassan who was the first person, man or woman, to win both the 1500m and 10,000m events in the same meet. Donavan Brazier won gold in the 800m in an American record time of 1:42.34.

Nike and Salazar created the NOP in 2001. Some of the American runners who competed in NOP were Galen Rupp, a two-time Olympic medallist in the 10,000-metres and the marathon, Goucher, who earned silver in the 10,000m in the world championships, Matthew Centrowitz, who is the 2016 Olympic 1500-meter champion and Ritzenhein, a former U.S. record holder in the 5,000m as well as Hasay, who is the second-fastest American all-time.

The 61-year-old Cuban-American is a former American record holder in the marathon. 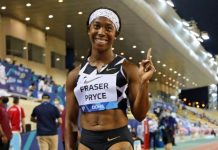