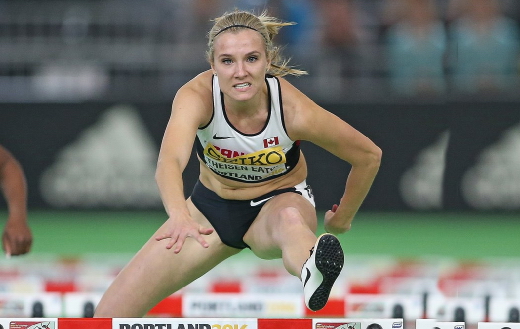 According to superstition, “three times a bride’s maid; always a bride’s maid,” but not according to Humboldt, Saskatchewan’s Brianne Theisen-Eaton who broke the curse today winning gold in a global championships.

Theisen-Eaton won a gold medal today for the first time during the 2016 IAAF Indoor World Track and Field Championships that are taking place in Portland, Oregon. The Humboldt, SK native left it until the final event to take the lead winning the 800-metre race in the time of 2:09.99.

The 27 year-old got off to a blazing start by running a personal best 8.05 seconds in the 60-metre hurdles. The first place finish in that event earned her 1120 points.

She finished fourth in the high jump, leaping as high as 1.85-metres. In the third of five events, the shot put the Nike-sponsored athlete placed fifth with a put of 13.7-metres.

She then finished fourth in the long jump with a respectable 6.42-metre leap.

She was in third place, 150 points back of Ukrainian Anastasiya Mokhnyuk going into the final event, the 800-metre race. As the 800-metres is one of her strengths, she needed to beat Mokhnyuk by at least 11 seconds. Her 2:09:99 was almost 14 seconds faster.

Her 4,881 point total is a new personal best and a Canadian record. Theisen-Eaton won silver in the 2014 World Indoor Championships, she also won silver in two world outdoor championships in 2013 Moscow and 2015 Beijing meets.