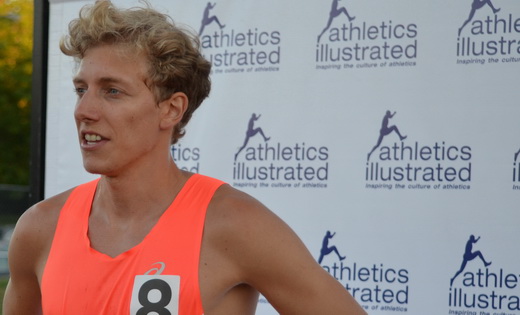 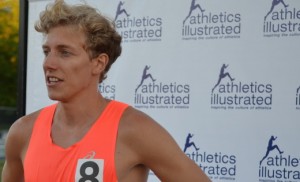 What if Canada’s two representatives in the men’s 1500m during today’s race at the Pan American Games run under 3:36.20 and place top-five or top-three? Will Athletics Canada be forced to look at some of their own qualification criteria and have to consider re-writing them?

It may be too late for the 2015 IAAF World Track and Field Championships that are taking place next month in Beijing, China, but it might start some serious reflection and perhaps it should. Less is more, scale down the language and limit the possibility for lawsuits and maximize the potential for participation in major games.

Athletics Canada, the governing body of the sport of athletics (running and field events) currently has a good problem. The sport appears to be experiencing a resurgence of talent. Even with injuries to key athletes, Canada appears to be a more serious contender and not just in the sprints like during the days of Donovan Bailey, Bruny Surin and company, but across the range of events: high jump, decathlon, long jump, sprints, middle-distance, race-walk and long-distance running.

Today, Canada sits second in medals at the 2015 Toronto Pan American Games overall and second in medals earned in the sport of athletics. This is big news considering Mexico (122 million), Brazil (200 million), Argentina (41 million), Colombia (48 million) and USA (300 million) out-populates Canada’s 35 million. Only the US leads Canada in medals. If by measuring purely by population data, the US should have nine times the medals, while Mexico should have four times, they don’t, not even close.

Those stats are not that reliable anyway, for example poor little Cuba has just 11 million people, if they had the same population as the US, by this measure, they should have 174 athletics medals to the US’s current tally of 27 (based on Cuba’s current 6) and Canada’s 15, according to their performances this week. Cuba is a powerhouse, albeit a tiny one. Poverty might have something to do with it. Having the ability to send more bodies to a competition as well as have them properly prepared for that competition (is a whole new can of worms) is probably much more influential on the numbers than population; however, that should not detract from Canada’s semi-coming out party in Toronto. It’s a good thing.

Author Malcolm Gladwell in his book Outliers told us that success – and he was referencing the greatest, the Beatles, Microsoft, Apple et al – was a meeting at the confluence of timing, preparation and hard work. There is no doubt that the athletes work hard and timing is a fine detail that a brain surgeon and a 1500m runner can relate to for very different reasons. And of preparation, Brannen and CPT appear to have arrived, right on time, for competition today. Three weeks ago, they did not, which was a problem for everyone.

Last week they both ran in Europe to eyebrow-raising times. Brannen ran a season best performance while CPT 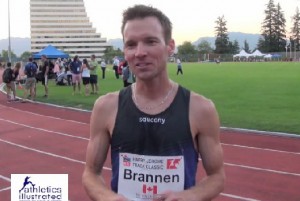 dropped a massive personal best by four seconds, after running a thoroughly head-scratching and naval-gazing race at the Canadian Track and Field Championships in Edmonton. Brannen was the defending champion and the veteran with the best resume and best personal best time, albeit a little dated. He didn’t end up top-three and he and the rest of the field ran a time so slow that in theory, the junior men would have smoked them and some of the women could have as well.

Brannen can’t be blamed though as the entire field was in on it. If Brannen and CPT decided to not race in Europe, it would have appeared that they were not prepared for competition. Other than those performances what does Athletics Canada have to go on? Current fitness is something that all athletes have to demonstrate in order to be nominated to wear the Canadian uniform and represent the country. Near misses and coattail riding doesn’t count, not even in horseshoes.

In 2012 Lanni Marchant, Canada’s current record holder in both the marathon (2:28:00) and the half-marathon (1:10:47) and Krista DuChene, the second fastest all-time in the marathon ran under the IAAF standard to qualify for the London Olympics in the Rotterdam Marathon in April, but not under the Athletics Canada criteria. They appealed and spent considerable time fighting their case, which cost Athletics Canada time and money. The women lost and did not get to go.

The old regime was tossed and the ladies are now celebrated. Yesterday Marchant won a bronze medal in the 10,000m, not even her event.

You can bet that the new team at Athletics Canada is considering the language of their criteria to best be able to send Brannen and CPT to Beijing without opening the door to endless litigation. They have to be careful, here, sadly. And they may want to create some perceived or otherwise, separation from the past; there is a bit of a juggling act to consider.

What happens today may either cause the important people at Athletics Canada to shrug their shoulders and utter phrases like, “that wouldn’t win anything at World’s anyway, we are sticking to our policy,” or they are all going to be staring each other in the eye thinking the same thoughts like, “let’s examine the criteria, these guys should be in Beijing.” This last, quietly. Well that is what we would like to think anyway.

Right now, there is no one going, so no athlete would be bumped from the men’s 1500m going to Beijing Worlds, that’s a missing hurdle worth much consideration.

Is there room in the language of the selection criteria that can empower Athletics Canada to give Brannen and CPT the green light to go to Beijing without being sued, should they perform well today? If there is, then there is no better time than today for these two talented athletes to demonstrate their ability.

Let’s hope they do. Let’s open that can of worms.