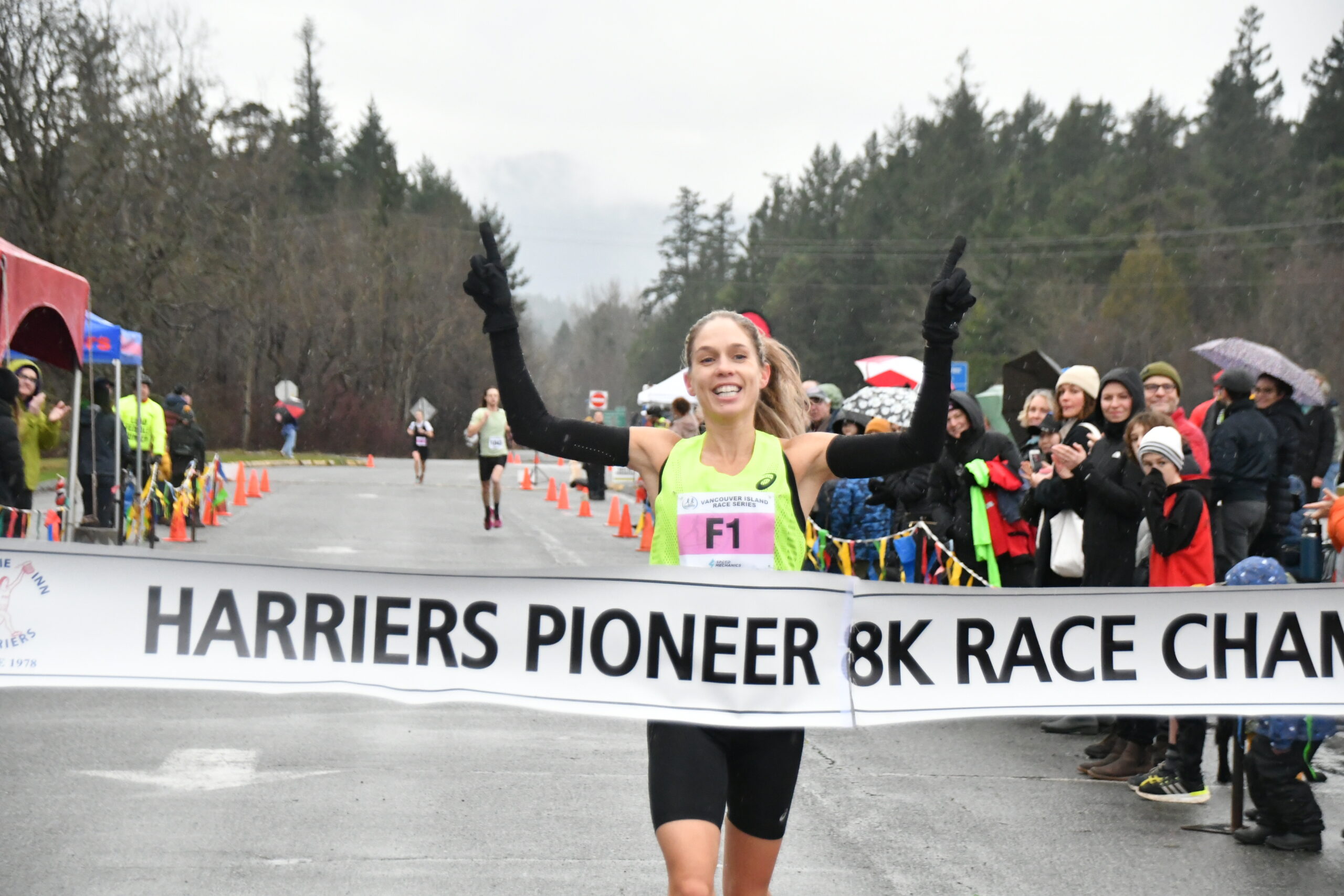 Even though Geneviève Lalonde lives in Greater Victoria, it may have been more of a home-field advantage for North Vancouver’s Natasha Wodak, Sunday at the 44th Harriers Pioneer 8K and the provincial championships.

Wodak, the national marathon record holder at 2:23:12 (Berlin 2022) entered Sunday’s race as the eight-time champion (in nine attempts). She holds the course record and the event record at 25:55 and 25:28, respectively. The one time she did not win, she finished second. It is her favourite 8K race and she attempts to do it each year.

“It was a great day at the Pioneer 8k. The rain didn’t dampen anyone’s spirits — everyone was racing hard and having fun! It was great to be a part of my favourite 8k again.“

The two training partners ran together for approximately half of the race before Wodak put some separation between the two. The Pioneer 8K is a seasonal rust buster for Wodak and Lalonde, especially Lalonde who took a competitive break in 2022 and will re-up her efforts for the 2024 Paris Olympic Games for her third Olympics. Lalonde holds the national 3000m steeplechase record at 9:22.68. In 2020, she won the Pan Am Cross Country Championships nearby at the Bear Mountain Golf Resort. Wodak had finished second.

Wodak is preparing for the Houston Half Marathon Sunday, Jan. 15. She may attempt the national record of 69:38, which is currently held by Andrea Seccafien. Wodak was the first Canadian to go sub-70 which she accomplished in Houston in 2020 with her 69:41 performance. She does want her record back.

Wodak won in 26:20, while Lalonde clocked a 26:35, and the third-place finisher, Kate Ayers set a new personal best at the distance with her 27:24 performance.

“It was such a blast getting to witness the energy of the Vancouver Island running community while briefly coming up for air in a big training block,” shared Nobbs. “I wanted to race this a little smarter with even splits all the way through the race and just rode the atmosphere of the other racers cheering me on during the second half. Was much more fun to run my own effort and see who may or may not be there at halfway into the race.”

Finishing second was Jaxon Kuchar who clocked a 24:27 finish time. Gabe Van Hezewijk took third in the time of 24:57. Both athletes compete for the University of Victoria Vikes.

The top junior U20 runners were Kuchar and Ella Ballard with her 28:48 clocking. She took ninth in the women’s field.

Roslyn Smith who was competing in the 75-79 age category was the fastest age-graded runner on the day at 96%, one percent faster than Wodak.

Olivia Lundman from Lanztville, BC, a national-level race walker, finished second in her 20-24 age group while walking. She clocked a 37:45 finish time.

There were 619 finishers, which is the most in nine years and the 11th most in the event’s 44-year history.

The next race in the eight-race series is the Cobble Hill 10K happening Sunday, Jan. 22. Information about the series is available at www.islandseries.org.