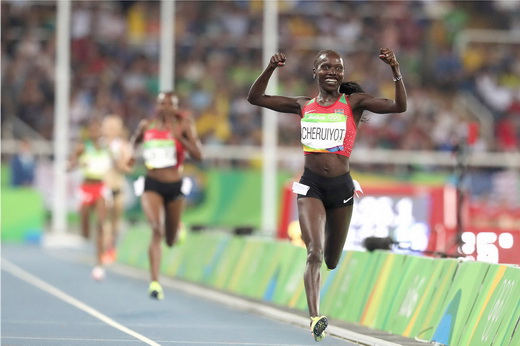 For the first time the Mainova Frankfurt Marathon will have an Olympic champion in the elite field. Vivian Cheruiyot of Kenya, winner of the 5,000m gold in Rio last year, will run the second marathon of her road running career in Frankfurt on October 29. The organizers expect up to 15,000 entrants for the 36th edition of the Mainova Frankfurt Marathon which is an IAAF Gold Label race, the highest category in international road running. Online entry is still available at: www.frankfurt-marathon.com

Vivian Cheruiyot is the most successful runner ever to enter the Mainova Frankfurt Marathon. The list of her achievements is impressive with not only an Olympic 5,000m title but five World Championship gold medals to her credit. In 2011 in Daegu in South Korea she did the double, winning both 5 and 10,000m titles.

After an extraordinary career on the track the 34-year-old has a new target in view: achieving similar excellence in the marathon. Cheruiyot made her debut at the distance in London this April, finishing fourth in the high-quality field in 2:23:50. Frankfurt will be her second marathon and the Kenyan is confident of making a considerable improvement if conditions are good.

“We are delighted that, for the first time in the event’s history, an Olympic champion will be running the Mainova Frankfurt Marathon,” said the race director Jo Schindler and added: “The fact that an Olympic champion such as Vivian Cheruiyot has decided to run Frankfurt reflects the status of the Mainova Frankfurt Marathon around the world. Top athletes appreciate world-class results on a very fast course and top-flight organization.”

Among the factors making the recruitment of Vivian Cheruiyot possible was an attractive bonus offer with the Frankfurt Messe playing a decisive role. The event is putting up a cash prize for the woman who breaks the course record which currently stands at 2:21:01, set by the Ethiopian Meselech Melkamu five years ago. If a woman breaks the record in Frankfurt’s Festhalle on October 29, they will earn 30,000 Euro, which will be paid by Frankfurt Messe. “We are very grateful to the Frankfurt Messe for their support. Combining with them has helped secure Vivian Cheruiyot for the Mainova Frankfurt Marathon,” said Jo Schindler.

“I am looking forward to running the second marathon of my career in Frankfurt. I won my first World Championship title in Germany in 2009 and will try to get my first big marathon victory there in 2017,“ said Vivian Cheruiyot, who showed fine form just nine days ago. She clocked a personal half marathon best of 67:44 at the Great North Run, finishing second. “I’ve heard very good things about the Frankfurt organization, atmosphere and course from some of my friends and training partners who have won there before. I saw some photos of the red carpet finish in the Festhalle and hope I will be smiling when I cross the finish line on October 29.”