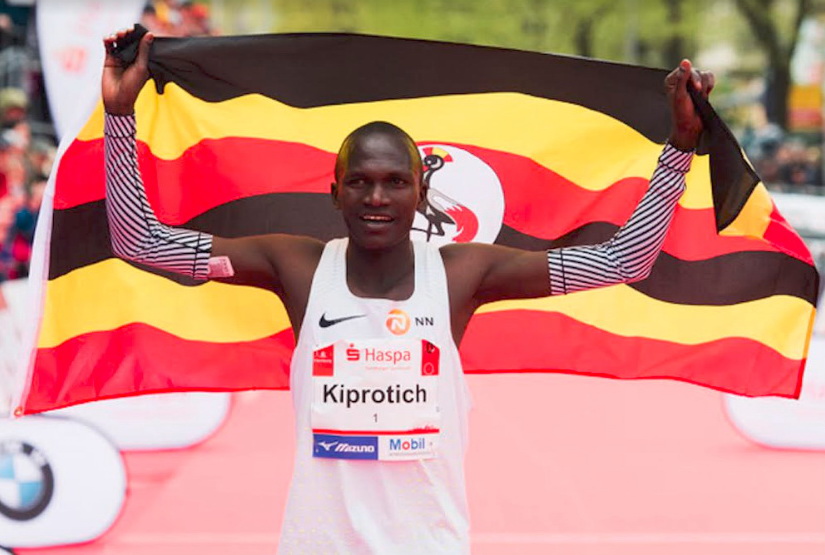 Olympic Champions Stephen Kiprotich and Ezekiel Kemboi, as well as Jessica Augusto, are the star names among a group of elite runners added to the Haspa Marathon Hamburg. World half marathon record holder Joyciline Jepkosgei and former double World Marathon Champion Abel Kirui had been announced earlier. Germany’s biggest spring marathon will take place on 28 April with an intriguing elite field. The mass field will be impressive as well: Including other running events staged parallel organisers expect up to 35,000 athletes to compete. Online entry is still possible at: www.haspa-marathon-hamburg.de

The 2012 Olympic Marathon Champion Stephen Kiprotich will return once again to the Haspa Marathon Hamburg. Uganda’s gold medallist from London, who took the World Championships’ marathon in 2013 as well, was second here in 2017 and fifth last year. On both occasions, the 29-year-old, who is Uganda’s national record holder with 2:06:33, ran 2:07 times. It will be the first time that an Olympic Marathon Champion will compete for the third time in a row in an elite race of a German marathon. „We are more than happy to welcome Stephen back to our race. His return also shows the international position of the Haspa Marathon Hamburg as one of the major spring marathons,“ said chief organiser Frank Thaleiser.

While Joyciline Jepkosgei will run her debut the men’s race will also feature a very prominent debutant who is an Olympic Champion as well: Ezekiel Kemboi has chosen the Haspa Marathon Hamburg for his first race at the classic distance. The 36-year-old Kenyan won two Olympic titles (2004 and 2012) and four World Championship gold medals in a row (2009 to 2015) in the steeplechase. Kemboi’s debut is a long awaited one. With a modest personal best of 64:15, which he ran in a race in Kenya, he did not establish himself as a leading half marathon runner. However, he ran only very few races at the distance. It will be interesting to see what sort of impact Ezekiel Kemboi can have in the marathon.

The fastest runner on the start list is Ayele Abshero, who is returning to the race. Back in 2012 the Ethiopian clocked his personal best of 2:04:23 when he won his marathon debut in Dubai. While he did not come close to this sort of time Abshero did very well at the Haspa Marathon Hamburg: He was third here last year with a fine 2:07:19.

Abel Kirui, who was World Marathon Champion in 2009 and 2011, is the number two on the start list with a personal best of 2:05:04. The Kenyan said that he intends to attack Hamburg’s course record of 2:05:30, set by Eliud Kipchoge in his marathon debut in 2013. Fellow-Kenyans Jonathan Korir and Amos Mitei, who have personal bests of 2:06:51 and 2:07:28 respectively, are expected to join the hunt. There will also be a Japanese elite runner in the field: Taku Fujimoto clocked his personal best of 2:07:57 in last year’s Chicago Marathon.

The 34th edition of the Haspa Marathon Hamburg sees the return of a former champion in the women’s race: Jessica Augusto won here two years ago with 2:25:30, a time that remained the fastest by a European throughout 2017. 37-year-old Augusto holds a personal best of 2:24:25. While the debut of Kenya’s world half-marathon record holder Joyciline Jepkosgei (64:51) will be very much in the focus in Hamburg there are three women who have run faster than Jessica Augusto: Madai Perez of Mexico (PB: 2:22:59), Japan’s Tomomi Tanaka (2:23:19) and Dibabe Kuma of Ethiopia (2:23:34).

“Our strategy to give a platform to young and upcoming athletes, as well as established and charismatic runners, has been very successful. The Haspa Marathon Hamburg has built a very good reputation. To present runners like Stephen Kiprotich, Ezekiel Kemboi and Jessica Augusto is helpful with regard to promotion but also an added bonus for our spectators on race day,“ said Frank Thaleiser.