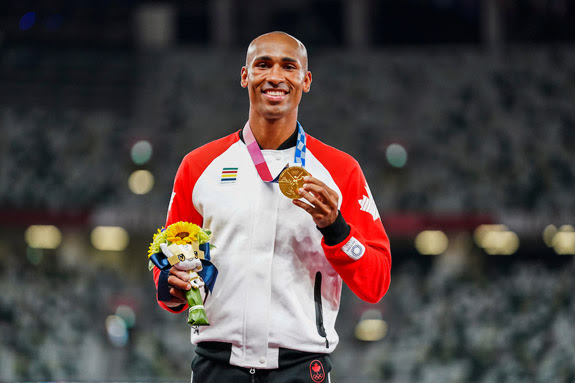 “Being named the Flag Bearer for this group of Team Canada athletes is a tremendous honour and an amazing way to cap what has been an unbelievable few days for me,” said Warner. “What each of us has gone through over the past 18 months to even get to these Games is what makes Tokyo 2020 all the more special. Though I compete alone, I’ve never felt more support, not only from my coach, Gar, and our team, but from my community and everyone back home cheering us on. As a team we had our respective challenges training through the pandemic and that collective experience will always be a part of our story. It is a journey that we can all be incredibly proud of.”

“I think for us, it’s great representation of the showing of our athletes here in Tokyo,” said Head Coach Glenroy Gilbert. “For Damian, what a wonderful opportunity to be able to carry the flag in for the entire Canadian team. As they say, he’s the best athlete in the world based on 10 events. After two days in the gruelling sun and more than 9,000 points, he’s earned it. I truly think he’s the best person for the job.”

Dubbed the ‘World’s Greatest Athlete’ by Canadians from coast-to-coast-to-coast, Warner achieved something many decathletes only dream of – he surpassed the 9,000-point mark, the holy grail for every competitor in the event, which had only been achieved three times previously.

Warner’s performance was literally one for the record books. He led from start to finish and accumulated a total of 9,018 points to establish a new Canadian and Olympic decathlon record. His performance over the two-day competition will surely go down as one of the greatest moments in Canada’s Olympic history.

“It’s a fantastic honour for the sport. We’ve had such a successful Games, and to have that achievement recognized in someone who performed extremely well on the day, set a new Olympic record and broke one of the all-time classic barriers in his own sport is outstanding,” said Simon Nathan, Athletics Canada’s High Performance Director. “It’s just great for him. I’m really happy for our sport and for Damian.”

“I think Damian is the perfect choice for flag bearer. He is humble and unassuming and exemplifies what many Canadians see as core values: he is loyal, hard working, polite, family oriented and respectful of others,” said Warner’s personal coach Gar Leyshon. “Damian has also been through the Olympic wars. His progression over three Olympic Games from exciting new talent in 2012 and an unexpected fifth-place finish, to disappointed bronze medallist in 2016, and finally Olympic gold medallist in 2021, is the type of story that resonates with even casual fans. There are many others who would be superb choices for this honour, but I cannot think of anyone who would represent us as a country better than Damian.”

In the first of 10 decathlon events, Warner put down a blistering time of 10.12 seconds in the 100 metres – a time that would have nearly qualified him for the men’s 100-metre final. The Canadian record holder then soared 8.24 metres in the long jump, which would have secured him the bronze medal in that event. He finished the morning session with a season’s best throw of 14.80 metres in the shot put, then followed it up with a jump of 2.02 metres in the high jump and crossed the finish line in 46.48 seconds in the 400 metres.

But it was the final event, the 1,500 metres, where destiny awaited. Warner had to run sub-4:33 to climb over the 9,000-point threshold and into history. Could he do it on the world’s biggest stage? Yes, Warner capped the competition running the 1,500 metres in 4:31.08 to cement the gold medal and his name in the record books.

At the end of the day, Warner could not be beaten and would not be denied his gold medal moment. What a way to win your first Olympic championship.

Over the course of these Games, Warner has earned the title of Olympic record holder, 9,000-point member, Greatest Athlete in the World and Olympic Champion. He will add one more: Canadian Flag Bearer.