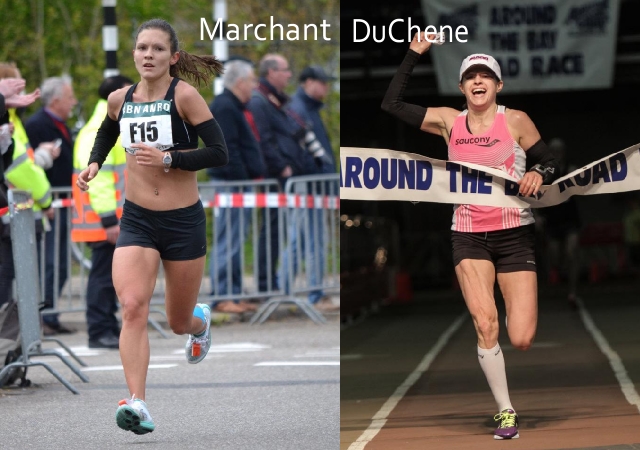 Lanni Marchant of London, Ontario and Krista DuChene from Brantford, Ontario ran the 2012 Rotterdam Marathon on April 15th 2012 in personal best times of 2h:31.50 and 2h32.06, respectively. Both times are faster than the International Association of Athletics Federation (IAAF) requirements for athletes to qualify to contest the marathon distance at the 2012 London Olympic Games.

The IAAF London Olympic marathon standards are, 2:43 for the “B” standard and 2:37 for the “A” standard. The Canadian standard is set higher, based on previous Olympic marathon results. The benchmark is set at where Athletics Canada (AC) believe that the athlete, should they achieve the standard, are then able to finish top-12 during the London Games. That time is set at 2:29.55, there is no “B” standard for this event.

The requirements are documented and have been set well in advance. Martin Goulet, Chief High Performance Officer at Athletics Canada said, “The marathon standards were published and announced on September 22, 2010”.

Marchant and DuChene have petitioned AC, based on being the top two female marathon runners in Canada while having run much faster than the IAAF standard. The first petition was denied 16 days after their submission. “We are in the process of appealing the decision. According to AC procedures a committee is named to address our appeal, then after that we can go through arbitration if necessary,” says Marchant.

Regardless of the outcome of the petition, appeal and potential arbitration process that they have to go through to find out if they will get named to the Canadian Olympic team, the women have made important steps to qualify for the 2013 Moscow World Track and Field Championships that take place  August 10th to 18th with the same results as mentioned above that they achieved in Rotterdam. The Athletics Canada standards for the World Championships range from 2:29.55 to 2:35:00 (see below for details).

Asked if she is also planning to compete in the World Championships Marchant replied, “I do plan on running at Worlds… though we’ll see where this entire process leads me. Right now it’s all about remaining positive and not letting frustration get the better of me”.

Goulet suggests that the Worlds are an important step towards becoming an Olympic-ready marathon runner. Goulet said, “It is worth noting that Dylan Wykes and Reid Coolsaet, who have fully qualified for London 2012, participated in a similar project at the 2009 World Championships, earning valuable race experience which has allowed them to run under the Olympic standard this year, and qualify for the Olympics”.

Meanwhile, Duchene and Marchant will bide their time waiting for the  results of the appeal. “I must say it would be nice to have Krista and I named to the team based on our performance and our initial arguments, but something tells me we are still only in the beginning steps”. Goulet said as much in a recent email with Athletics Illustrated, “we are currently going through a formal appeal process – that could possibly be a multistage process with the two ladies. They have both officially appealed to Athletics Canada”.

Athletes will be selected based on performances in the priority order listed below*. Only performances achieved at marathons recognized for qualifying purposes by the IAAF, and achieved within the IAAF Qualifying Period will be accepted

*IMPORTANT NOTE: Athletes will be ranked based on their best performance within each step