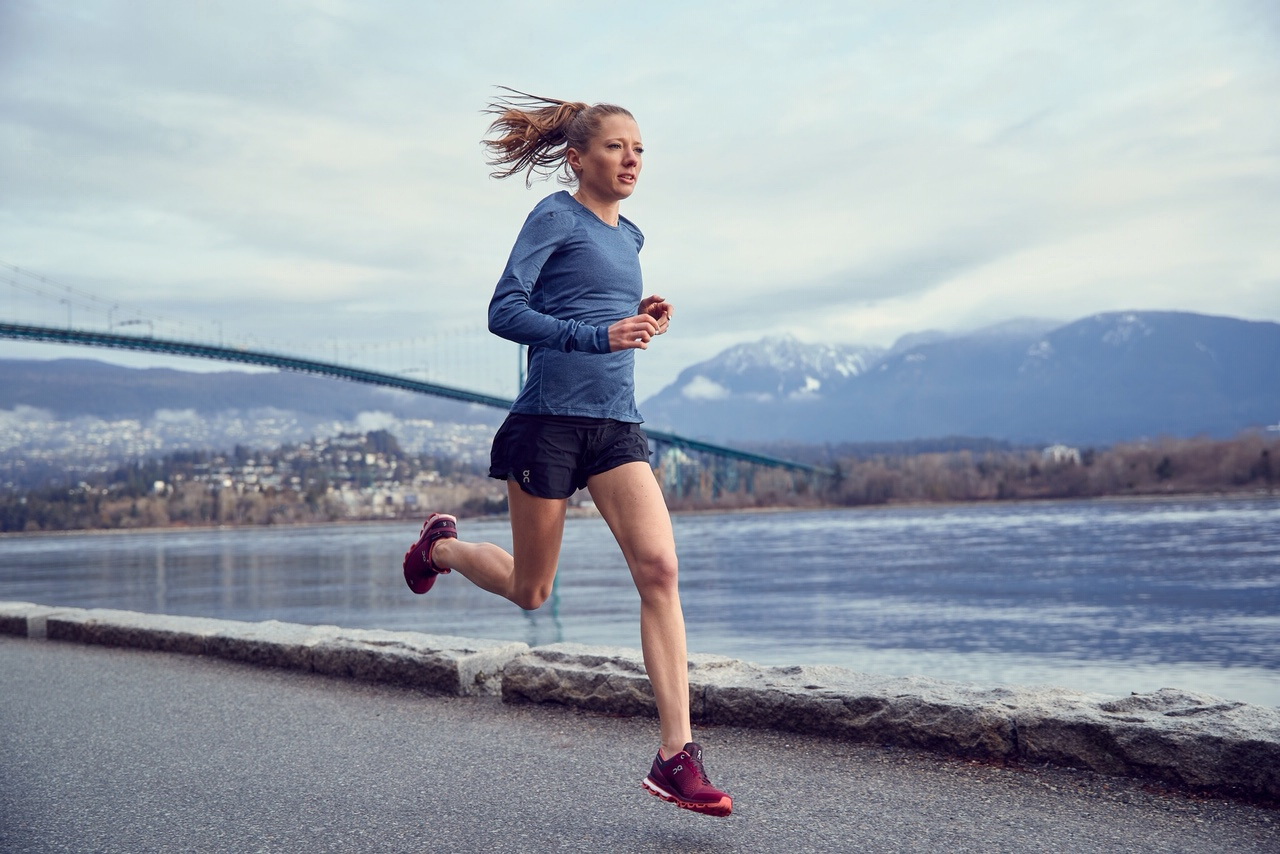 As a journalist-cum-running fan (with a small amount of science instilled – enough to be dangerous), I am naturally curious about sportswear and at the same time a skeptic of the floggers amongst us. Enough of a skeptic to wear a steely brow in a store, which makes me less approachable in retail environments, “just looking, thanks.” It’s a defence mechanism. But I will open up when I see something that piques my curiosity.

While perusing the vendors in BC Place Stadium, Saturday, April 13 at the 2019 Sun Run Expo, I came across a Swiss sportswear company, On Running.

As a supporter of the minimalist approach, I was intrigued by the flex and lightness of some of their shoes. The lack of stiffness is believed to allow the foot to naturally do what it naturally wants to do. The hypothesis is that freeing the foot from the constraints of a stiff shoe, will allow the muscles and other soft tissues to grow and strengthen. The opposite of protecting the foot. This theory has its supporters and detractors.

The great Arthur Lydiard of New Zealand felt that there was an incredible amount of power that can be developed from the lower leg, ankle area, and foot. Leonardo da Vinci found the foot to be a marvel of engineering like a suspension bridge.

On Running shoes appear to provide a medium somewhere between the old glorified ballet slippers of the 1970s that the elite ran in and the Hoka shoes that offer great amounts of cushioning today.

Horses for courses, there are people that swear that the uber-thick Hoka shoes allow running on asphalt and concrete for extended periods.

Cam Levins ran a 2:09 marathon in Toronto in Hokas – it was a Canadian record. Levins is known to train at very high volumes. Perhaps after surgery and various injuries, he prefers some protection. He wasn’t wearing the super thick editions in the race. He was wearing their slightly rockered EVO model, which contains a carbon plate similar to Nike’s Vaporfly that offers a purported 4% benefit; claims such as this brings down the brow, and up the skeptic in me.

On the other hand, Vancouver’s Rachel Cliff is also the national record holder with her 2:26:56. She has twice bettered the national marathon record.
She is now sponsored by On Running as an ambassador.

On Running said in a statement, “Today’s announcement comes on the heels of Rachel’s record-breaking performance in the marathon on March 9 in Japan. Hitting the Olympic A standard in the marathon while setting the national record has fuelled Rachel’s hopes of becoming an Olympian, although she will not limit herself to one distance. Rachel will now shift her focus to the track, gearing up for the Canadian National Championships this summer.”

They are referring to her Payton Jordan Invitational race coming up, where she will attempt to run sub-31:50 to qualify for the 2019 Doha, Qatar IAAF World Track and Field Championships starting Sept. 27. She will be wearing spikes.

“Pushing your body to its limits is both an art and a science,” she says.  “In athletics, there are always new boundaries to push and ways to improve yourself.  As a scientist, I like to think of it as ‘the ultimate science experiment,’ albeit one where me, the athlete, is the research subject in a study with a sample size of one.”

So it is absolutely incidental that I happened upon the On Running booth at the Sun Run Expo in Cliff’s hometown, days before the announcement. Although Cliff did not run the Sun Run this time, she would have likely challenged for the win.

Cushioned landing, firm push-off: that’s the core concept behind the new running shoe by On, the young Swiss-based manufacturer. On’s patented technology combines all the benefits of a soft training shoe and a hard and fast racing shoe; a radical development in the sports industry. Land on the sand, push off from the running track!

The secret to this bold new dual functionality lies in the On’s “Clouds” – hollow pods on the sole of the shoe that stretch back on impact to cushion the landing and then lock to form the solid foundation required for a powerful push-off.

Athletes who have worn On and their coaches have reported greater muscle activation, new personal bests and shorter recovery times. These findings are also backed up by scientific research: independent studies by the reputed Federal Institute of Technology in Zurich, Switzerland have confirmed that the patented CloudTec® system substantially reduces athletes’ heart rates and blood lactate levels.