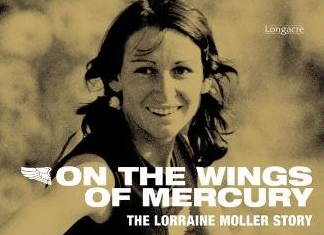 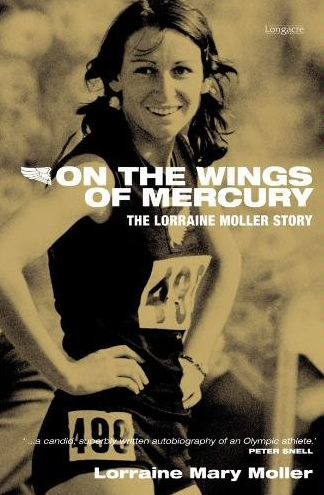 On the Wings of Mercury is a self–penned autobiography by Lorraine Moller. From the days when she was a world-class middle and long-distance runner, it is one of the most riveting and highly emotional tell-all memoirs — a must-read.

Moller begins her witty stream of consciousness in self-deprecating style, where she describes her birth and how even then she forced people to run beyond their scope, in this case, the family physician, who had to run just to make the delivery in time. Moller captures the reader’s attention immediately and never let’s go.

“Legend tells of fire-breathing dragons that lurk in the bowels of the earth beneath Catalonia. What I sense this summer afternoon of 1992 in Barcelona as I survey the racecourse is that the road stretching between me and my dream is a steamy tar-pit of reptilian breath, threatening to suck the water out of my skin and desiccate my precious hope for gold.”

As a child, she was often sick and required hospitalization. The reader gets the sense that Moller’s self-esteem was affected through her teen years and later into her twenties, by her lonely hours wiled away in the cold hospital environment. Her apparent lack of self-esteem may have been exacerbated by her engagement in negative relationships, culminating in two marriages and four engagements; this paradox devolved into a perpetuating cycle of self-questioning.

If you think modern athletics is in a moral crisis, Lorraine Moller takes you back to the 1970s and 80s. Not the Nike-upon-Oregon Disney fable where Pre was the golden boy of athletics, and when Bowerman was burning out waffle irons, much to his wife’s chagrin, but to the time when Eastern Bloc athletes were doped up on steroids. The women — being grotesquely masculine — looked even more hideous in their pathetic attempts to appear feminine when dressing in lace (only exacerbating the contrast) at the Helsinki World Championships athlete’s village — an impossible task. Moller pulls no punches in her assertion of the cheaters as victims of systematic doping by their communist federations. She also shares a sense of pity for them. However, no dopers of any stripe escape her wrath.

“A rumour ran through the (Seoul Olympic) village that there were 20 more positives (tests) among medal winners and the announcement of them was imminent. It never came. We were all waiting for Flojo to follow Ben Johnson out of the country in shame. I had seen her in Los Angeles four years before and now she had beefed up like a prize bull for a show. For my own curiosity, I chased her down in the village, ostensibly to offer my congratulations for her series of gold medals and world records in the sprints. Up close, she had a five o’clock shadow that even heavy make-up couldn’t conceal. At least, I rationalized, ‘failure’ was a preferable label to ‘cheat’, and definitely preferable to sporting a moustache with red lipstick.”

And in the so-called free world of amateurism — a holdover from the original aristocratic pastime of pedestrianism — athletes continued to be pinned to the mats of poverty. That is until Moller and her contemporaries decided enough was enough and threw caution to the wind and accepted prize money and appearance fees, risking their amateur status and Olympic dreams, just so they could make a living doing what people paid to see them do; run at unearthly speeds.

Katherine Switzer established a firm beachhead for women’s long-distance running on the international stage. It just so happened that Moller, who holds admiration for Switzer, was feeling that she did not belong at the 1988 Seoul Olympics. Her indignation on several fronts manifested itself where she took to yelling at certain individuals entering the stadium during the opening ceremonies. Switzer risked being a martyr for change, Moller and her contemporaries followed brazenly in her wake.

“I stood in the centre of the field watching the remaining teams enter. I should have had pride overwhelming me and shivers running up and down my spine, but I didn’t. I felt no love for mankind, only cynicism. There were so many Arab and African teams coming in with three fat officials and one athlete, and no female representation at all. It only served to annoy me further. I took to yelling at them as they went past, “Where’re your women?” My team-mates were giving me dirty looks but that only encouraged my heckling.”

Moller’s career out-lasted all of her contemporaries. None, except fellow Kiwi Rod Dixon, both the beneficiaries of the Arthur Lydiard influence, rivalled her versatility as a middle and long-distance athlete. Between her many marathon wins, World Championships, Commonwealth and Olympic performances, her life story is recanted with a wonderful sense of metaphor and wit. Lorraine writes with startling frankness in her humorous first-person narrative.

“Piddling became my trademark. Especially in shop windows. The local fabric store came to have a distinctive odour on several bolts of material. Must have been imported from an exotic country, they sniffed. I could not help it. I was ill.”

When asked if writing On the Wings of Mercury was a cathartic experience, she said, “Totally cathartic. As I sifted through my past I bawled, laughed out loud, got indignant, disappointed all over again and mad as hell. By the time I got to the finish, I had made peace with it all. I could let it go out into the public arena because my past history no longer had a hold on me.”

During her continued quest for gold to the age of 41, at the 1996 Atlanta Olympic Games, Moller found herself atop Mount Olympus, stripped bare (in the snow) with arms raised to the heavens she beseeched the almighty Zeus, the father of all Olympians, to plead a humble request for sport’s supreme glory; Gold.

“Oh Zeus, Great and Glorious Father of the Olympians, I, a mere mortal, with the greatest of humility, come to seek your audience. I have journeyed far to deliver this, my plea and my wish. I ask for your assistance in my bid to win gold in the women’s marathon in Atlanta on July 28th, 1996. For this, I pledge to you my service and promise in every way to make myself worthy of being an Olympian…”

Zeus gave her gold in a sense and in-turn Moller gives us an autobiography so good and so entertaining, the reader feels her indignation, her humility, gets angry right along with her and rejoices in the humour and the joy of her glory.

As Dr. Peter Snell wrote, “this is the most compelling autobiography I have ever read.