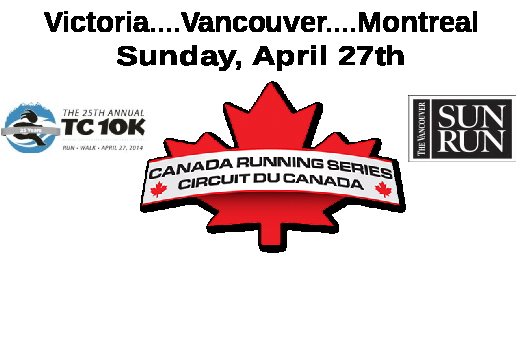 This weekend will be a big one for road racing in Canada as there will be three major events taking place in three different cities on the same day. There will be two 10 kilometre events as well as the Canadian Half Marathon Championships.

Montreal, Quebec is hosting the Scotiabank Montreal Half Marathon or Banque Scotia 21K de Montréal, which runs through Parc Jean-Drapeau, while Vancouver, BC will have downtown streets filled with up to 50,000 runners from the lower mainland in the 29th annual Vancouver Sun Run (10k). At the same time Victoria, BC will see the 25th annual TC10k happen throughout downtown and Beacon Hill Park. Over 12,000 runners took in the 2013 edition, this year the TC10k added a point-to-point half-marathon that starts at the University of Victoria and ends at the Inner Harbour (where the 10k also finishes).

The Canadian Half Marathon Championships in Montreal is race number four of the eight event Canada Running Series. The 2014 series runs from March 23rd to October 19th ending with the Scotiabank Toronto Waterfront Marathon. As earlier reported Eric Gillis and Krista DuChene will defend their titles, “It’s actually a flat course and it could be fairly fast. Both times I have run there it has been windy along the water. So if we get a nice calm day I think a lot of folks can surprise themselves on that course,” said Gillis who won in 2012 and 2013.

Meanwhile women’s champion Krista DuChene must battle back from a surprise loss at Toronto Yonge Street 10k where Toronto’s Rachel Hannah blew past her with five hundred metres remaining to steal victory in 32:33.

“I am thrilled for Rachel, I really am,” DuChene admitted after the race. “It’s a huge breakthrough in her running career. She has done the work and got herself up step by step. I am honoured that she beat me. I am not one to run a race and say ‘Oh I just wasn’t in it today.’ No, she flew past me and I had nothing to give.

“So because of that and even with Erin Burrett placing third I am never going to take my competition lightly not that I ever did, but I will have to have my ‘A’ game for Montreal. I am a bit more experienced, I suppose, at the longer distances. But that doesn’t mean anything.”

In the Vancouver Sun newspaper, Victoria’s Geoff Martinson is reported to be the Great Canadian Hope for the Sun Run. He is. Kelly Wiebe, who was the Canadian favourite is out with a bacterial infection. Martinson in no slouch though, as he has represented Canada, which includes making the finals at the 2011 IAAF World Track and Field Championships in the 1500 metre distance. He has also won or placed high in several road races in Victoria and Vancouver over the past 18 months, including winning the St. Patrick’s Day 5k in Stanley Park, by setting a new course record of 14:24. He achieved this one week after defending his Bazan Bay 5k title setting a new course record and personal best at the distance with his 14:12 finish time.

Martinson is up against Kenyans Paul Kimugul who is the defending champ, Willy Kimosop who won in 2009, Benard Langat and Jordan Chipangama of Zambia.

Rachel Cliff of Vancouver is the local favourite competing in the Sun Run. She is entering the race in her best form as she ran a personal best 5,000 metre time of 15:49.17 April 4th at a meet at Stanford University. That was the first time she ran under 16 minutes for the distance and was a 17-second personal best. Her 5,000 metre time suggests a 33:15 to 33:40 10 kilometre finish, which would have won the 2012 Sun Run and be a third-place finish in the 2013 edition.

She is the 2011 Canadian Inter-university Sport (CIS) national champion in both the 1500m and 3000m distances. She competed for the University of Guelph. She has twice competed in the IAAF World Cross Country Championships.

The TC10k in Victoria features the 2013 women’s defending champion Jane Murage from Kenya. She expects to run around 32:20. Long-time Canadian international (originally from Russia) is the top-seeded master (40-plus), Lioudmila Kortchaguina, who should be the first Canadian to cross the line. She has run the half-marathon distance as fast as 1:10:50 and the marathon in the time of 2:29:42.

The men’s field like the women’s field includes a Kenyan as the race favourite in Kip Kangogo. Kangogo recently won the 2014 Toronto Yonge Street 10 in 29:07 and has placed in the top-5 of many road races across Canada over the past several years. The top master Jim Finlayson should run unchallenged. Finlayson is a former Canadian Marathon champion, three-time competitor in the IAAF World Cross Country Championships and winner of the Royal Victoria Marathon (GoodLife Fitness Victoria Marathon. He competed for NCAA Division 1 University of Michigan before running for the University of Victoria and eventually owning the streets of Victoria, BC.

Typically these three races are on different weekends. The Vancouver Sun Run and the TC10k normally offer back-to-back race opportunities, which also provide two potential paydays for top-level runners and two opportunities to tune up for the BMO Vancouver Marathon or Half Marathon, which is happening Sunday, May 4th.