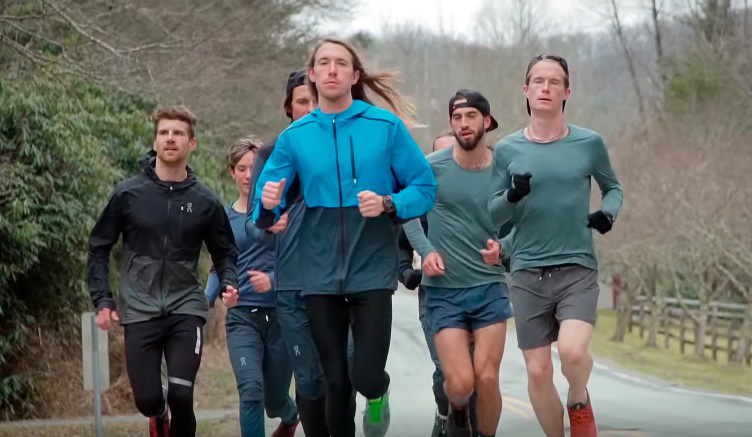 On, the world’s fastest-growing running company has taken storytelling to new heights with its riveting five-episode docu-series “Chasing Tokyo,” that has proven to set a new standard in content-driven video production for the running world and endurance sports industry.

In only a four-week period since releasing Episode 1 of the enthralling story behind the journey to the U.S Olympic Marathon Trials by the On ZAP Endurance team of athletes, the entire Chasing Tokyo series has received a combined social media, Youtube and native website audience of more than 6 million viewers to-date, showing the overwhelming popularity and demand for this format of short-form storytelling. The highly anticipated first episode, entitled “Dudes in the Woods” was released on February 5th and generated almost 400,000 viewers on Youtube in the first week alone.

Each week thereafter, the strategic release of one episode was broadcasted within On’s Youtube channel, social media platforms and company website, culminating in the Episode 5 series finale being released this week—showing a bittersweet performance in Atlanta by the small group of dedicated runners from Boone in North Carolina. Each episode of the docu-series gives a close-up portrayal of the individual athlete’s training, friendship and comradery—filmed over a 12-month period to document their undying attempt to fulfill an Olympic dream for the first time.  All five episodes of the Chasing Tokyo docu-series, produced by Hungry Man and directed by Emmy award-winning director, Andrew Hinton (“Man with the Halo”), are now available to watch on the On ZAP Endurance Team Athlete Page or via On’s Youtube Channel.

“The Chasing Tokyo docu-series has been an encouraging success,” says Olivier Bernhard, co-founder of On. “The year-long production has been our longest to-date and gives audiences an intimate and personal look inside the lives of a determined band of brothers and sisters towards their ultimate Olympic goal.  This format of storytelling has proven immensely popular with running and active lifestyle audiences alike and not only demonstrates a unique achievement in digital marketing but portrays the enduring human spirit of these runners. We are all very proud of the On ZAP Endurance team and the coaching staff for what they have accomplished during this Olympic cycle.”

Members of On ZAP Endurance gave a good account of themselves at the U.S Olympic Marathon Trials in Atlanta, with two team members finishing within the top 20, among a field of more than 700 competitors on Saturday, February 29th. Tyler Pennel and Josh Izewski finished 11th and 17th respectively, with Pennel establishing a personal best time of 2:12:34.  Fellow team members Tristin Van Ord came in 52nd and Joe Stilin finished 107th.  On ZAP Endurance put forward nine athletes for the Olympic Marathon Trials – the most number of individuals the group has ever had on the starting line for an Olympic trial since the inception of ZAP 18 years ago (one team member had to pull out of the race due to injury).

On ZAP Endurance is a non-profit training center for post-collegiate, Olympic hopeful distance runners. ZAP athletes live and train together in Boone, a small town in North Carolina’s Blue Ridge Mountains – perfect for endurance athletes looking to train at high altitude year-round. The On ZAP Endurance founders, the late Andy Palmer and his wife Zika, developed the program as a way to give back to distance running – a sport that played a significant role in both their lives. The team’s goal is to develop World Class American distance runners by providing them with the support that allows them to train like Olympians.

Since 2002, ZAP athletes have seen success on every level and in every event from the 1,500m to the Marathon including: 37 Olympic Trials qualifiers; 6 World Cross-Country team members; 2 World Track and Field Championship qualifiers in the Marathon, and 4 Club Cross Country national team titles. In December 2018, ZAP brought five athletes to the USATF Marathon Championships. All five qualified for the 2020 Olympic Trials, and two of the team were in the front pack, securing 3rd and 4th place.

ZAP Fitness Foundation, founded in 2001, is a non-profit training center for post-collegiate, Olympic hopeful distance runners. Its founders Andy Palmer and his wife Zika came up with the idea as a way to give back to the sport of distance running, a sport that played a significant role in both their lives.  Andy, a lifelong athlete and two time Olympic Trials Marathon qualifier, was fortunate to begin his running career during the running boom of the 70’s and train in Boston with the likes of Bill Rodgers, Joan Samuelson, Greg Meyer and Bruce Bickford. While Andy had the opportunity to train with the best, his lack of financial support was a great hindrance to his running career. When his competitive days were over Andy acquired a PHD in Sports Psychology and adopted the motto “The Mind is the Athlete.” Andy began working with athletes of all ages and abilities to teach them the mental skills that could bring them athletic success.

On recently announced its new partnership with global tennis icon Roger Federer, who has joined the company as an entrepreneur. Roger will use his unique experience to help take product development, marketing, and fan experiences to new levels for the Swiss sports company.