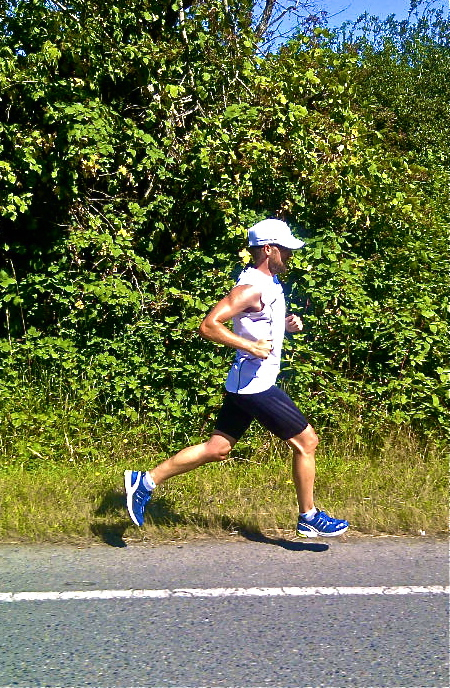 Steve Osaduik, from Nanaimo, BC competed in the NCAA  for division 1 for Northern Arizona University. He was a transfer from from Seton Hall in New Jersey.

He competed four times in the IAAF World Cross Country Championships, twice each as a junior and senior. He also competed in the IAAF World Half Marathon Championships. Osaduik owns a 2:16:49 marathon personal best, which he achieved at the Royal Victoria Marathon in 2006 (GoodLife Fitness Victoria Marathon). He also owns a half-marathon best of 1:06:40.

Recently Osaduik moved from Nanaimo on Vancouver Island to Fort Langley a suburb of Vancouver.

Christopher Kelsall: You appear to be most comfortable when leading in a race. On the local scene you are often way out in front. What will happen when you find yourself in a field of international runners and you are in a chase pack for most of the race? How will this affect your tactics?

Steve Osaduik: I enjoy running in a group if the caliber is high. I would be content in a group knowing I am probably going to get a good time however, if I maintained a comfortable pace up with these runners, it wouldn’t take long before I’d probably put in some surges and break the pack up.

CK: In the local Cobble Hill 10k, January 27th you came from behind to overtake Todd Howard for the lead and eventually the win. Whereas two weeks ago Howard managed to win quite handily, were either of these races tactical?

SO: No, two weeks ago I was not in any real shape, and now I am still not in any real good shape either, just better than two weeks ago. When I am able to get in consistent training I improve quickly. I can get to a certain point aerobically in little time. Then the real work begins.

CK: So, how far away are you from the real work now?

SO: I would say 4-5 weeks before I am ready for high intensity work on a regular basis.

CK: The word is out that you are planning to race the ING National Capital Marathon in Ottawa, in late May. Spring marathon season provides many opportunities to run fast courses, such as Rotterdam, London, Boston, even Eugene and others. Why Ottawa?

SO: Well, I have gone to London twice and both times failed to finish. I would go back, but I don’t think I would be welcomed, plus it is a very expensive trip. I looked at Rotterdam, but it is sold out. I don’t have any contacts, so I don’t think I could get in anyway. I also looked at Boston. I have a qualifying time, but it may be a tough one to get into as well. Ottawa, even though it is the last possible chance to qualify for Beijing, has fast guys up front and if training goes to plan, I have a chance to be up at the front and in a position to run around 2:11. Why not just do it in Canada on a character course? I don’t think it is any slower or tougher than the Victoria marathon, so time wise I believe I can run well.

CK: Once Ottawa is done and let’s say you run the qualifying time, what then? Do you have a specific recovery and training plan just for Beijing or are you keeping your eye on the immediate task of Ottawa?

SO: If I qualified I would take a bit of a break, recover. Nothing specific right now but my coach (Al Johnston) and I would sit down and figure out exactly what I need to do to get recovered and back into training, and what races to get into to keep me focused for Beijing. I would imagine it would involve some good mileage and long workouts at or quicker than my current marathon pace. We would also need to figure out what kind of race Beijing will likely be and train for that. If it is a tactical race, I need to ask myself if I should go out at a specific pace to start and move through, after half way or decide on my options then. We need to look into the weather and pollution (which could play a huge role).

Steve takes a breath of pure, west coast ocean air and continues…I may need to head to a warm climate and get used to the heat and arrive in Beijing or an area close by, to get used to the conditions in advance of the games. Race wise I would like to get into a good 10k on the track and possibly a couple 5k races to work on my top-end speed.

CK: Do you have your eyes on a half marathon?

SO: I am planning on running the National half champs in April, in Montreal. This will be a good indicator as to where I am at and how training is going. I will be coming off a month long training stint at altitude, so I will be able to see if it (altitude camp) helped.

CK: I know you run well when training at altitude. You have spent some time in New Mexico as well as Arizona, where are you thinking of training ‘at altitude’ in preparation for Ottawa? Are there options available to you now?

SO: I am going back to Flagstaff Arizona. I did not like New Mexico. I have spent enough time in Flagstaff where I know the area and am comfortable in the town. There are miles and miles of trails and they all revolve around the University campus, so training can always be done nearby.

SO: I get in some good long runs of 20-22 miles. I have also added another 20 miler mid-week in the past. This was at a time when I ran as much as 170 miles per week. It takes some getting used to and a long build up to get to that point, but it has its benefits.

CK: What kind of pace do you run 20 milers in? I assume the mid-week 20 miler is slower.

CK: We have also talked about the Arthur Lydiard method of training. You mentioned that you train based on Lydiard principles and you own at least one of his books. There are those who train exactly the way Lydiard coached and those, like Ron Daws, Jon Brown, Rod Dixon or many Japanese athletes, who train based on his principles however, may not follow the method with exact precision. Would you say you are a Lydiard purest or do use the general methodology to train by?

CK: Switching gears a little – getting back to the dogs – at one time I believe you have had a total of 9 Chihuahuas, I am sure all with creative names. Do you still have the 9 or have you pared this number down?

SO: I am down to 7 right now, with one going to my brother and grandparents. My sister is going to take another in March of this year leaving me with 6. This works because I am still guaranteed to see them all on a regular basis.

CK: What are all their names?

SO: Indie, El Sanchez, Royal, Kingsley, Linley, Nibbler, Cubby (Wolfey), Domino, and Shakey, which is short for: ‘Maybe I is Shakey’.

CK: Is all this apparent love for dogs a front for protection from larger beasts? It’s a known fact that around here, if you train in the forest with a small dog, the cougars will take the dog. Is this really why you are running low on cougar bait with just 6 Chihuahuas remaining? I mean the family taking the dogs story sounds heart-warming and everything, but I don’t know.

SO: Well I can tell you if we did get confronted the Chihuahuas would probably get me into some trouble, they don’t seem to care what size you are if you get in between them and me they are going to take you out. The other side of that is, I would do all I could to protect each and every one of them.

CK: Qualifying for the 2008 Olympic Games Marathon as a Canadian will not be an easy task for any marathon runner. Do you have an edge in that you have age on your side and may bounce back from Ottawa quicker therefore recover fully to get ready for the Olympics?

SO: I do recover quickly. It would not be a problem to run well at Ottawa and be back at it and ready to compete in Beijing.

CK: Do you have any BIG impending news to share with everyone, Steve?

SO: Yes Karen and I are expecting our first child sometime in July this year. I am very excited. This will definitely be the highlight of the year.